After landing on Utah Beach on D+4, she was killed during an artillery barrage outside Elsenborn, Belgium, on October 21, 1944. Bob Welch delivers the life and death of Army nurse 2LT Frances Y. Slanger by weaving her early life from Lødz and Boston with narratives of World War II. Welch is a master at the craft of writing. Slanger also wanted to be a writer, but always struggled with English. Her incessant scribbling got better and she poured her heart into a letter to Stars and Stripes that was granted the front page by editors who did not know that she was dead. 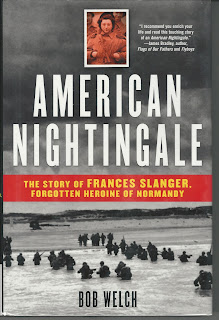 It is 0200 and I have been lying awake for one hour, listening to the steady, even breathing of the other three nurses in the tent. Thinking about some of the things we had discussed during the day. The rain is beating down on the tent with a torrential force. The wind is on a mad rampage and its main objective seems to be to lift the tent off its poles and fling it about our heads.
The fire is burning low and just a few live coals are on the bottom. With the slow feeding of wood and finally coal, a roaring fire is started. I couldn't help thinking how similar to a human being a fire is; if it is allowed to run down too low and if there is a spark of life left in it, it can be nursed back...So can a human being. It is slow, it is gradual, it is done all the time in these Field Hospitals and other hospitals in the ETO.
We had read several articles in different magazines and papers sent in by grateful GIs, praising the work the nurses around the combat areas. Praising us--for what? I climbed back into my cot. Lt. Bowler was the only one I had awakened. I whispered to her. Lt. Cox and Lt. Powers slept on. Fine nurses and great girls to live with...of course, like in all families, an occasional quarrel, but these were quickly forgotten.
I'm writing this by flashlight. In this light it looks something like a "dive". In the center of the tent are two poles, one part chimney, the other a plain tent pole. Kindling wood lies in disorderly confusion the ground.. We don't have a tarp on the ground. A French wine pitcher, filled with water stands by. The GIs say we rough it. We in our little tent can't see it. True, we are set up in tents, sleep on cots and are subject to the temperament of the weather.
We wade ankle deep in mud. You have to lie in it. We are restricted to our immediate area, a cow pasture or hay field, but then, who is not restricted? We have a stove and coal. We even have a laundry line in the tent. Our GI drawers are at this moment doing the dance of the pants, what with the wind howling, the tent waving precariously, the rain beating dow, the guns firing and me with a flashlight writing. It all adds up to a feeling of unrealness. 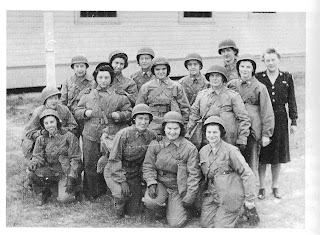 Sure, we rough it, but in comparison to the way you men are taking it, we can't complain, nor do we feel that bouquets are due us. But you, the men behind the guns, the men driving our tanks, flying our planes, sailing our ships, building bridges and to the men who pave the way and to the men who are left behind--it is to you we doff our helmets. To every GI wearing the American uniform, for you we have the greatest admiration and respect.
Yes, this time we are handing out the bouquets...but after taking care of some of your buddies; seeing them when they are brought in bloody, dirty, with the earth, mud and grime, and most of them so tired.  Somebody's brothers, somebody's fathers and somebody's sons. Seeing them gradually brought back to life, to consciousness and to see their lips separate into a grin when they first welcome you. Usually they kid, hurt as they are. It doesn't amaze us to hear one of them say, 'How'ya, Babe' or 'Holy Mackerel, an American woman!' or most indiscreetly, 'Howabout a kiss?'
These soldiers stay with us but for a short time, from 10 days to possibly two weeks. We have learned a great deal about our American soldier, and the stuff he is made of. The wounded do not cry. Their buddies come first. The patience and determination they show, the courage and fortitude they have is sometimes awesome to behold. It is we who are proud to be here. Rough it? no. It is a privilege to be able to receive you, and a great distinction to see you open your eyes and with that swell American grin say, “Hi-ya babe!”—Stars and Stripes, November 7, 1944.

The story came to Bob Welch in December 2000 when he was a columnist for the Register-Guard in Eugene, Oregon. A reader had found a short biography of Slanger and asked Welch to pursue her story. He did. He got a call from Eugene resident Sallylou Cummings who had served with Slanger. She was then 82. The Greatest Generation was slipping away and Welch made one of the last grasps for it. He succeeded admirably.

Bob Welch has written nine books, spanning an impressive range of genres. Among them, listed and summarized for sale on his website (http://bobwelch.net/) are :


Welch's biography of Frances Y. Slanger is both warm and objective. He brings her to life. She was an otherwise small person who had one great moment. Ultimately, we all are or Shelley would not have written “Ozymandias.” But Frances Slanger was also an individual representative sample from the self-generating process that is America. Not only has that system generated its own power, it generates selves. Born Freidel Yachet Schlanger, she remade herself according to an inner image that too few others in her life shared. Parents, teachers, and hospital supervisors were ignorant of her powerful potential energy. Welch found it. 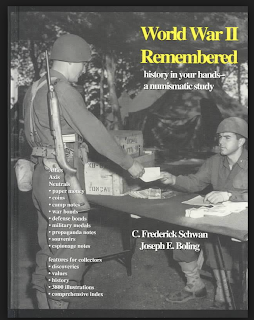 Just as a chance encounter brought Slanger's story to Welch, so, too, did I find it in a minor reference about World War II. As a numismatist, I have some interest in Military Payment Certificates, part of a better developed curiosity about how people create and use money. Soldiering is life at the extremes. I subscribe to an occasional email list, the MPC Gram, written mostly by Fred Schwan, who with Joseph Boling, compiled the definitive guide to American military money of World War II. Schwan mentioned finding American Nightingale at a militaria show outside Toledo, Ohio. I requested the book from our city library and picked it up at my neighborhood branch.

PREVIOUSLY ON NECESSARY FACTS
Armies Without Weapons
Peace is More Powerful.
The Syrian Quagmire
A Successful Imitation of Alan Turing
Posted by Michael E. Marotta at 1:10 AM