If the United States ever sought to build a pro-Western, democratic government in the Arab/Islamic matrix, Syria could have been a good place to start.  The Assad governments have always been secularist. That was why Syria had no problem accepting military aid from the USSR. The Muslim Brotherhood was opposed to Hafez al-Assad, the father of the current president, Bashar al-Assad, because he liberalized trade and commerce, opening up economic opportunities. (Wikipedia here).  Dr. Bashar al-Assad was practicing pediatric ophthalmology in London when his brother was killed in a car crash. (Wikipedia, here.) So, he returned home to take over the family business, running Syria. Instead of supporting his government, the United States made an enemy out of a man who had been dedicated to bringing eyesight to blind children by means of science.

Apparently, the “strategy” from the U.S. State Department these past ten years has been to foster uprisings of democratic elements within Arab/Islamic nations to topple dictatorships, and bring those peoples into the global community of free trade and open borders.  For a while, the news media called it “Arab Spring.”  The failures are evident everywhere in the Middle East and southwest Asia: Libya, Tunisia*, Egypt, Syria, Iraq, Bahrain, Yemen, Iran, Afghanistan … And no change has come to our good, close, personal, and very royal friends in Saudi Arabia where the few protests were brutally crushed (BBC here and BBC here).

Just as the failure in Viet Nam was one consequence of a wider and deeper problem, today’s news from Syria demonstrates the results of bad philosophy.  Fifty years ago, the United States attempted to fight a “Cold War” without a specific ideology, and to do so against an enemy that had one.  Independent of President Reagan’s rhetoric, the ultimate failure of communism was an internal problem. Soviet socialism was unworkable. So, too, today, is the United States attempting to defeat a reactionary mysticism in the Arab/Islamic complex, while not identifying explicitly our own ethical virtues – or their metaphysical foundation. That was why, in opposing communism, the Reagan Administration hosted the Taliban in the White House. In hindsight (always 20/20), it would have been better to partner with the USSR to modernize Afghanistan.

As with Viet Nam, the first level of failure was the lack of a democratic tradition within the culture. People are people; and every village and every empire has its checks and balances rooted in popular approval. That is not the same thing as cultural individualism. 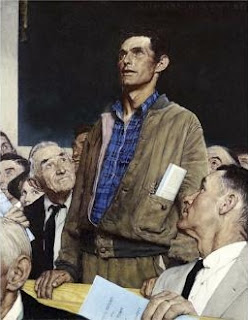 The famous Normam Rockwell propaganda painting for World War II, Freedom of Speech, exemplified the American political tradition. We used to say, “Stand up and be counted.” The secret ballot is the Australian Ballot. In colonial America, you could voice a different opinion without guaranteed reprisals from your neighbors.  It was not perfect. Speaking out can always be risky. But, largely, in colonial America, there came to be a tradition of open debate. It took about 150 years to develop. Through those five generations, local government at the village level and the colonial level were the warp and woof of civic affairs. When the British crown seized the colonial administrations, and violated the Bill of Rights of 1689, the fabric was torn.

The so-called “American Revolution” had taken place in the minds of the people in the generation before the Revolutionary War. That war began a year before the Declaration of Independence.

If the U.S. government had a plan or even a vision, it seems to have been that reading manifestos in the streets would rally people to throw off 500 years of isolation and stagnation in order to embrace multiculturalism, diversity, and fusion cuisine.

Since then, the immediate “strategy” of arming so-called moderate rebels in Syria also has failed. The American-sponsored Harakat Hazm surrendered itself and its American weapons to al-Qaeda affiliate al-Nusra (Telegraph UK here and USA Today here).

Of course, no such vision existed.  We cannot even say the word “capitalism” aloud, though now we can say “homosexual” in most places.  We have yet to explicitly identify and endorse the cultural trajectory of the Enlightenment that gave birth to our Republic: reality, reason, self-interest, tolerance, initiative, and wealth-production.  Some of those have tendrils within Islamic culture, but nourishing them would take time, perhaps five generations, even after they were identified.

(9 Oct '15: Four Tunisians received the Nobel Peace Prize. "President of the Tunisian employers union Wided Bouchamaoui, Secretary General of the Tunisian General Labour Union, Houcine Abassi, President of the Tunisian Human Rights League Abdessattar ben Moussa and the president of the National Bar Association, Mohamed Fadhel Mahmoud." -- Reuters. Demographically, illiteracy is high, calling into question the basis for democracy there, at least as we understand it. The nation has no democratic tradition.  Tunisia suffered two jihadi massacres, one at the Bardo National Museum, the other on the beach and inside the Riu Imperial Marhaba Hotel.)

ALSO ON NECESSARY FACTS
Making Big Money in 1600: The Life and Times of Isma'il ibn Taqiyya
The Science of Liberty
Success of the WEIRD People
Politics and the Inverse-Square Law
Happy May Day, Comrades