On Monday, October 5, 2015, Hal Edwin Fulton, author of The Ruby Way presented “Core Methods We Forgot We Have” to AustinRB at the Capital Factory. First published in 2001, and now in its third edition, Fulton’s book was the second English language guide.  It is available in Chinese, Japanese, and Polish.  My introduction to Ruby on Rails was in 2012 through a four-week class offered by CabForward. As a technical writer, my interest is in being able to work with programmers. Hal Fulton’s lecture was clear, concise, informative, and insightful. I enjoyed it so much that I stopped taking notes and just watched.

RubyRB starts at 6:30 with a sideboard. This month’s host was Netspend, who treated us to Qdoba. “Hurray! It’s not pizza,” said one of the 30 or so present.  As we ate, we introduced ourselves to the group.  Several of the attendees were enrolled at The Iron Yard, and looking forward to going to work as developers.   One of the other attendees said that his firm is hiring. That is pretty common. At the other Ruby group, Austin on Rails, employers looking for devops people sometimes out-number the unemployed.

A method in Ruby is like a function in Fortran or a procedure in Cobol: a little routine that someone created to do something useful. Some of them seem redundant: concat and append, for example. Hal Fulton explained that internally, concat builds a new array and fills it with the elements of the objects, whereas append actually does place the source object at the end of the target object, changing the target. append is computationally more efficient than concat.
The next day, via email, I asked Hal Fult0n about this redundancy.  “… Ruby is community-driven.  So, you cannot stop people from creating new methods and publishing them, even when they do exactly the same thing as an existing method.”  He replied: “Well, anyone can write a method and use it (or even create a gem and publish it), but Matz [Yukihiro Matsumoto: the creator of Ruby] and his minions are still very picky about what actually gets into the core. My take on it -- better too much functionality than too little.”

This book can be viewed as a sort of “inverted reference.” Rather than looking up the name of a method or a class, you will look things up by function or purpose. For example, the string class has several methods for manipulating case: capitalize, upcase, casecmp, downcase, and swapcase. In a reference work, these would quite properly be listed alphabetically, but in this book they are all listed together.

We don’t often think of the etymology of the word way, but there are two important senses in which it is used. On the one hand, it means a method or technique, but it can also mean a road or path. Obviously these two meanings are interrelated, and I think when I say “the Ruby Way,” I mean both of them. So what we are talking about is a thought process, but it is also a path that we follow. Even the greatest software guru cannot claim to have reached perfection but only to follow the path. And there may be more than one path, but here I can only talk about one.

That zen understanding explains the title of the book in Japanese: “… an invitation to the road.” 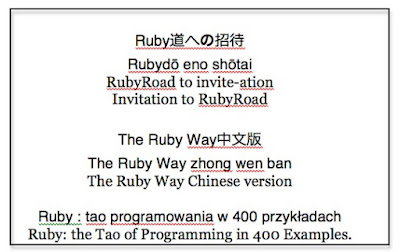 In his talk to AustinRB, Hal focused on arrays.  You can do three things to an array, he said. You can initialize or transform it; access an item or iterate; and search. Beginning with delete, delete_at, delete_if, and reject, he then rapidly produced examples for almost 50 minutes non-stop, working until his Macintosh warned him of a low battery, and still continuing until finally running out of power, at 8:03 PM.

A Successful Imitation of Alan Turing
John Kemeny Knew: We Shall Have Computed
Claude M. Watson (1922-2013)
Profits and Benefits in a Foreign Language