Choosing any one of four entrées along with any one of three different garnishes gives you twelve choices, not seven.  If you decline the meat (vegetarian, or just not interested), you have 16 possibilities, the null set being an element of every set.

My wife and I are fans of Romano’s Macaroni Grill.  She can avoid gluten by substituting vegetables for pasta with her fish or chicken dish. I like to build my own pasta by selecting pomodoro or bolognese sauce with different vegetables and meats to go with the spaghetti. 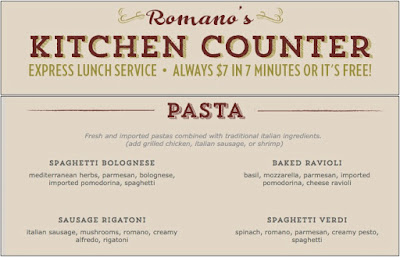 I was washing my hands when I heard a commercial for their “Seven Dollars in Seven Minutes” lunch menu. “Seven pasta choices for seven dollars in seven minutes,” the man’s voice said.  He listed them: Spaghetti Bolognese, Sausage Rigatoni, Baked Ravioli, and Spaghetti Verdi. “That’s just four,” countered the woman.  The man replied that you could add your choice of grilled chicken, Italian sausage, or shrimp. “That’s seven!” the woman beamed.  She was wrong.

One of four entrées times one of three garnishes is twelve possible selections.  Add the no-meat option and you get sixteen choices for seven dollars in less than seven minutes.

If you want to tweet about combinatorics, you can find an international Twitter group managed from Italy:  https://twitter.com/CombinatoricsIt