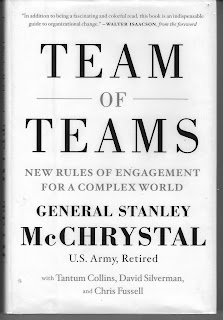 An enjoyable, erudite read, Team of Teams by Stanley McChrystal was written by a general for generals. McChrystal takes his time to make his points. He presents cogent evidence to support his assertions, but those would be easy enough to accept on the basis of his authority. His education and experience made him an expert.  From 2003-2008 he was in charge of the Joint Special Operations Command that was responsible for defeating the insurgency of Al Qaeda in Iraq (AQI), and neutralizing its leadership, including the death of Abu Musab al-Zarqawi. In order to achieve that, McChrystal had to reconfigure the way the Army usually operated.

The transformation was radical for the military, but familiar to the private sector. Information could not be held in organizational “silos” on a need-to-know basis. The office layout, while allowing adequate personal space, had to be open so that people could talk across desks, across islands of information and authority. This was only way that the allied joint forces could defeat AQI, which was decentralized, resilient, adaptable, flexible, and driven by the media of information exchange from the cellphone to the international news website.

The coordinating theme is the balance and integration of shared consciousness and empowered execution. Shared consciousness includes the physical perceptions brought in from information assets, either directly from soldiers in the field or indirectly from informants or remote sensors. It also includes the philosophy of the mission, an agreement on doctrine and rules of engagement. Given that, empowered execution allows those closest to a problem – taking a house or killing an enemy leader—to solve it in real time.

Early on, McChrystal establishes a baseline that he returns to repeatedly throughout the book. Frederick Winslow Taylor’s efficient organization defined not just the methods of production or the layout of the office, but the fundamental doctrinal premise of a civilization for 100 years.  Taylorist thinking led to the impenetrable (but immovable) Maginot Line that aircraft flew over. The coalition forces defeated Saddam Hussein because both sides were fighting the previous war. The Iraqi insurgency demanded new habits from new learning. It was time to take everyone’s brains out of their footlockers and put them all to work thinking, discussing, planning, and criticizing.


Chapter 10 “Hands off” contrasts the experiences of Commodore Matthew Perry and Gen. Ulysses Grant. Perry was on his own, over 6,000 miles from home. He had total control and no oversight. On the other hand, Grant issued meticulously detailed orders to his generals. McChrystal’s world was a strange mix of the two. While he enjoyed complete information input from assets in the field, soldiers, helicopters, and drones, he also insisted on letting the leaders on the ground make their own decisions, knowing, of course, that they were not alone at all.

McChrystal completed a master of science in International Relations from Salve Regina University. He has company. Maj. Gen. James W. Nuttall deputy director of the Army National Guard earned an MA at SRU. Gen. Peter Chiarelli completed an MA in national security strategy at SRU after earning an MPA from the University of Washington. After finishing a master's at Salve Regina, Gen. Anthony Zinni (USMC) earned another master's from Central Michigan University.

Perhaps making too much of his outside-the-box thinking, it is interesting to note that Gen. McChrystal recommended A Connecticut Yankee in King Arthur’s Court for Admiral Stavridis’s anthology, The Leader’s Bookshelf. Also, whether and to what extent such new age intuitions actually instantiated the doctrine of counter-insurgency outlined by David Galula may be putative. It may be that victory in Iraq such as it was came from doing what soldiers always do and that so-called “counter-insurgency” ultimately proved to be a failure because it could never have been a success.