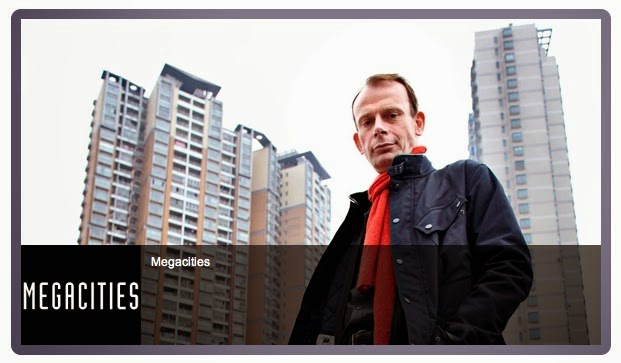 “Today there are more than 20 cities with over 10 million inhabitants. Some are sleek, modern, and hightech; others are filled with slums. BBC journalist Andrew Marr visits five megacities: one of the oldest (London), the fastest-growing (Dhaka, Bangladesh), the largest (Tokyo), one of the most dangerous (Mexico City), and one that considers itself the new world capital (Shanghai).” From Athena Learning and Acorn Online  I believe that these three one-hour episodes can open a door, if not to the right answers, then perhaps to the right questions.  Though I disagreed some of narrator Andrew Marr's opinions, the presentation was important and timely.

Episode 1: Living in the City
The need to strike a balance between community and efficiency is nowhere more apparent than in megacities. Marr examines Shanghai’s bursting-at-the-seams growth and the isolation of Tokyo. He also spends the night in a Dhaka slum—and despite its crime, pollution, and congestion, finds Mexico City an overwhelmingly friendly and livable place. 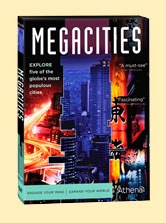 Episode 2: Cities on the Edge
How do you protect a city of 20 million people? Some of the dangers of the megacities are natural—earthquakes, floods, typhoons—while others are manmade. Marr takes an evasive driving course in the kidnap capital of the world and volunteers for the London police’s riot unit. In Tokyo, situated on three of the world’s most unstable geological fault lines, he learns how locals have planned for disaster.

Episode 3: Sustaining the City
Highways, roads, rail lines, and subway systems are the arteries of the megacity—and just like human arteries, they can become dangerously clogged. Marr pedals a rickshaw taxi in Dhaka, flies with Mexico City’s airborne traffic cops, and rides a high-speed magnetic railroad in Shanghai. He also finds out what London’s fast-food obsession is doing to its Victorian-era sewers. 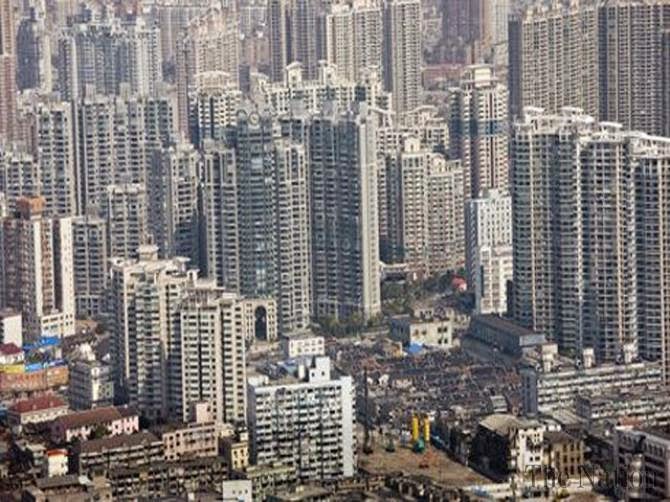 I do note that "mega" is relative.  Today over 300 cities have over one million inhabitants. We live on an urban planet. On May 23, 2007, the population of Earth crossed to 50% urban (ScienceDaily). Most of us live in cities.  Are megacities just very large towns or really huge villages; or do they have social structures with special functions different from their predecessors—if indeed, the village is the ancestor of the city.  It may not be.

Historically, cities seem to have blossomed all at once, even as other places have remained villages for 8,000 years.  Sumer and Babylon are gone, but Athens, Rome, London, Shanghai, Tokyo, and even New York, have long continuous histories of almost-uninterrupted growth.

But even they are not unrelieved deserts of concrete and steel. For a graduate class in Remote Sensing (2010), I wrote a paper on agriculture within megacities.  Moreover, about half of us urbanites are in small cities of fewer than half a million inhabitants. Only about 12% of us live in one of the 28 megacities.  (Christian Science Monitor here and National Geographic here.)

“Ugne Saltenyte, an analyst at the market research firm Euromonitor, recently calculated that 24 percent of the world's population over 15 years of age and with the equivalent of a two-year degree or more is concentrated in the world's 100 largest cities (report here). These same 100 cities — Saltenyte is counting full metropolitan areas here — are home to just 11 percent of the world's total population.” Washington Post here.