Colin Gullberg’s book, Chopmarked Coins: A History; the silver coins used in China 1600-1935, provides an overview of interesting artifacts often seen but little understood in numismatics.  In China, trust was low; the solution was chopmarks.  Specially trained clerks, called shroffs, tested and counter-struck coins to validate them.
Similar counter-stamps are known on ancient Greek and Roman coins; we call them banker’s marks. Generally, they are rare.  In American history, they are unknown, even as the same Spanish and Mexican coins supported trade commerce here as in East Asia. In China, chopmarks were profuse.

Before he was chairman of the Federal Reserve Board, Alan Greenspan wrote an essay on trust for Ayn Rand’s anthology, Capitalism: the Unknown Ideal.   “The Assault on Integrity” was a response to those who claim that capitalism is a rapacious system serving swindlers at the expense of the public.  In fact, said Greenspan, capitalism depends on trust.  Writing in 1966, Greenspan reminded us that millions of dollars of value in fiduciary instruments could be transferred with a telephone call.  Twenty-five years later, speaking to a Republican Party dinner, Newt Gingrich made the same point: you call an 800-number to make an airline reservation, give your credit card information, and the next morning show up at the airport actually expecting a ticket to be waiting.

Frontier America 1600-1935 and China of the same period shared much: the same global commerce carried by the same forms of money; a rough-and-tumble laissez faire business environment; benign neglect by the central authorities; even periodic booms and busts that could have been linked to each other. Yet, we never chopmarked our coins. 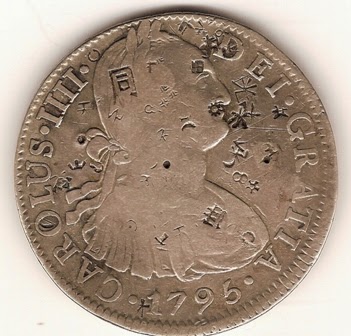 Bob Schreiner’s “Spanish Coins on American Notes”   provides ample evidence that U.S. federal coinage was a secondary medium.  Banks promised cents and dollars; but they showed reales as their guarantees.   Until 1857, many foreign gold and silver coins were recognized as legal tender. The U.S. Mint periodically published tables showing exchange rates for the issues of Spain, the UK, France, the Netherlands, Brazil, German states and Italian states. 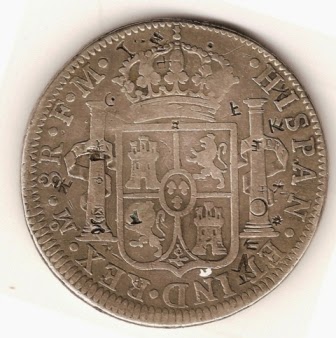 Of all the US coins, the Capped Bust Half dollar 1807-1836 was most commonly counterfeited.  Varieties of counterfeit “busties” are popular among some collectors who call them “bogos.”  Fifty cents represented about a day’s wages for the average industrial or crafts worker, about like $100 today.  (The modern $100 bill is the most frequently counterfeited both at home and abroad.)  Through the nineteenth century, we had privately struck “pioneer” gold coins from the Bechtlers (1831-1850), to the California gold rush mints, to the Mormons, and beyond. Yet, America never developed an institution similar to the shroffs.

Causes may be hard to find.

Religion is an easy guess.  In the punishment triangle of "swift, certain, and severe", all that really matters is certainty.  Prove to a criminal that he will 100% surely be punished lightly 20 years from now and you deter the crime.  It is better to take a chance on not getting caught, no matter how severe the threat.  God is omniscient, knowing not just your actions but your thoughts. For Christians and Muslims, punishment is certain.  Nothing equivalent exists in Buddhism or Confucianism, even as both do teach the importance of right action.  But neither do the Jews have any strong fear of punishment (or much reward) in the afterlife.  Despite being the bankers of the West, and having little reason to trust their Christian customers, Jews never established factories to manually counter-strike millions of coins.

Max Weber’s The Protestant Ethic and the Spirit of Capitalism opens with an extended quote from Benjamin Franklin’s Way to Wealth (1758). Franklin’s advice is to rely on yourself: “But with our industry we must likewise be steady, settled, and careful, and oversee our own affairs with our own eyes, and not trust too much to others; . . . Trusting too much to others' care is the ruin of many; for In the affairs of this world men are saved, not by faith, but by the want of it”.

The religious basis for trust may be only sublimated.  We do have social structures for establishing reputation.  In numismatics, we have third-party grading.  Electrical apparatuses come with the UL from Underwriters Laboratories and other stamps of approval.  Standard & Poor and Moody’s rate fiduciary instruments.  Our memberships in social organizations also validate us.

Perhaps the most curious fact about Chinese chopmarks is that they did not actually identify anyone. According to Gullberg, only the British tea trading firm, Tait & Co., used an identified mark, two characters giving its name.  While the myriad others must have been recognized in their times and places, no table was ever constructed, even though Canton (Guangdong), Shanghai, Hong Kong, Taipei, and other centers all had schools for training shroffs.
Chopmarked Coins: A History; the silver coins used in China 1600-1935
by Colin James Gullberg (iAsure Group JEAN Publications, June 2014,
187 pages, 8-1/2 x 11, color ill., $40 + S&H).
The book is for sale directly from the author.
Send an email to Colin Gullberg chopmarknews@gmail.com/