TURN THE SHIP AROUND

“Ahead two-thirds,” said the Captain. “Ahead two-thirds,” repeated the officer of the deck. The helm did nothing. They sat there, both of them, unable to comply. The Captain’s previous ship did, indeed, have a control input for two-thirds power. This newer submarine did not. The order could not be carried out. The real problem was that the officer of the deck and the two helmsmen all knew that, but would not contradict an impossible order. It was time to “turn the ship around” and turn followers into leaders. 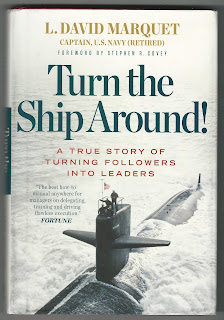 For a class in Complex Organizations, taught by Ron Westrum in the summer of 2007, we were assigned It’s Your Ship by Capt. D. Michael Abrashoff (2002). Both commanders faced the same problems. The crews were under-motivated and as a result the ship was rated unsuccessful in operations.  Capt. Abrashoff  solved the problem in the best way he knew: he empowered his subordinates to take charge of their areas of responsibility. They were rewarded for being pro-active, rather than waiting for orders. When Abrashoff’s billet changed and the ship came under a new captain, it all pretty much fell apart and things went back to the bad old ways. On the other hand, Capt. Marquet claimed to have effected a cultural change on board which continued after he cycled out. The difference is that Capt. Marquet got passed empowerment.

Empowerment is top-down. It does not begin with the actor but with that agent’s controller. That manager is often several levels above; and no one between is empowered to make the changes at the lowest level of action. So, Capt. Marquet did not empower anyone. Rather, he let them take on their own chosen responsibilities.

It was not easy. Missing from their experiences was an actual picture of what was required. No book or cinema they knew told them a story like the one they were expected to act out. All they knew was the U.S.S. Ustafish, the previous submarines they used to be on. So, when the Captain asked his chiefs – the frontline supervisors, chief petty officers, and others immediately above and below in rank—if they really wanted to be in charge of their areas, they all said, “Aye-aye!” without understanding exactly what would be required of them now.

Ultimately, when his chiefs failed (which they did early in the new process), the responsibility remained his alone. (See, also, the same lesson explained in detail in Extreme Ownership: How U.S. Navy SEALs Lead and Win by Winnick and Jocko reviewed here.) Marquet created the culture of authority aboard the Santa Fe by encouraging everyone to think out loud, to speak their thoughts. The new watchword was “I intend to…”.

That was one of several procedural changes that Capt. Marquet initiated before the failure at the helm. He was moving in the right direction.

It paid off during inspections. Operators occasionally attempted to perform the wrong action. Everyone makes mistakes. However, thinking out loud and not acquiescing to someone else’s error prevented mishaps. The Santa Fe passed her inspections and exceeded expectations.

Learn to think like the next higher level was another lesson here. But it goes back a long way. Gen. Jim Matiss said it best: “The battlefield has its own accounting system.” In both the book and the movie of We Were Soldiers Once and Young (reviewed here) Lt. Col. Hal Moore is training his mobile infantry; and as they deploy from a helicopter, he grabs the sergeant, throws him to the ground and yells, “You’re dead!” He then points to the astonished corporal and says, “You’re in charge!” Oh… now what…?

Capt. Marquet found concrete methods to realize his theoretical intentions. When people gathered to discuss a problem, he would wait until they had it framed and then he would leave the room. He asked, “How would we know if the crew were proud of the boat?” At the beginning, ahead of their first inspection, he told them to use “three identifiers”: Identify the visitor; identify yourself; welcome them aboard the ship. At first only about a tenth actually did that (though it was noted very positively on the evaluation). By the last inspection, it was routine. They had become proud of the boat.

That was an unintended consequence of another change in culture: embrace the inspection. Instead of suffering through it like everyone always does, ask the inspector: How did another ship solve this problem?

For myself, the book had two other invaluable lessons. The first was Don’t train: learn. On board the Santa Fe, learning opportunities were everywhere every day. Instead of parceling training into a time slot to be checked off, everyone was encouraged to be curious, not just questioning. The other was Don’t brief: certify. In other words, beyond assuring your managers that everything is OK, prove to yourself that it is.