The Night of January 16th

Telling someone that you enjoy reading the works of Ayn Rand is different from admitting that your opinions are informed by Ludwig Wittgenstein’s Tractatus or that you relax with William Faulkner. I recently worked with a team of a dozen technical writers. In fact, I was the only true technical writer on the team. The core group held MAs in technical writing from Texas State, but they were doing it just because it was a job that paid well. Another was a kindergarten teacher. Probably the most talented member of the team was an unpublished novelist. Of course, we talked about writing and literature. One of my colleagues said that he does not like Ayn Rand. “What have you read?” Nothing, he admitted, correcting himself to say, “I find that I don’t like the people who like Ayn Rand.” Up to that point, I thought that we had been getting along quite well.  Apparently not… 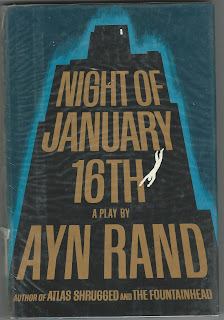 When Gerald Ford became President, I heard a radio program (NPR most likely), on which the interviewer asked the expert what Ford would bring to the Oval Office. The expert replied that from his long service in the House of Representatives where he had been elected Speaker, Ford learned that “to get along, you have to go along.” That advice has served me well these past 40 years. I am not much for getting along or going along, but I understand those who do.

My primary motivation is at the top of Maslow’s Hierarchy: self-actualization. That being as it may, I am not a recluse. I do not live in a cave in a forest. For me, the rewards in city life come from the anonymity of the division of labor: when you need a plumber, you don’t care who his cousin his, you just want the water line fixed. It may seem paradoxical, but the marketplace deeply engrains the personal ethics and moral behavior that makes socialization possible in the first place, and ultimately rewarding on all levels, physical, emotional, and spiritual.

On the other hand, around the world most cultures are “high context” societies where who your cousin is makes a big difference. Spain, Sicily, Greece, Iraq, Iran, the Philippines... The “low context” societies are the advanced, industrial and now post-industrial, information-age leaders: the USA, Australia, NZ, and Canada, the UK especially the English, Scandinavia and Finland, Germany, Switzerland, and (oddly, perhaps) Israel.

"The Weirdest People in the World?" is a paper published in Behavioral and Brain Sciences, (2010), available online from the authors here. These mainstream psychologists sought to demonstrate that most of the research being carried out to find “human nature” is flawed because the test subjects are usually university students or their children. They sent a dozen teams to non-industrialized locales to interview people by carrying out a variety of standard psychological games from simple optical illusions to more complex interactions such as Dictator and Ultimatum. Among their many findings was that the degree of market integration predicts how deeply individuals internalize their sense of fairness. Basically, we share because we want to. Other people share—when they do, which they might not at all—because they have to. 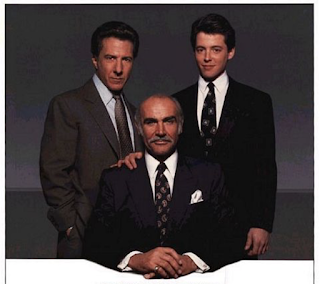 “Crime in the city” is an easy topic of casual conversation. But the gangs of New York came from high context societies. The best narrative I know about crime in the city is the movie Family Business. Sean Connery plays Jessie McMullen who married an Italian. Their son, Vito, was played by Dustin Hoffman. Vito married a Jewish girl. Matthew Broderick played their son, Adam. Ethnic cleansing is impossible in the city. Gang wars in the city (these days, usually over drug markets) are carried out by Hispanic and African-American high context cultures. As they say, “It takes a village…”

The Night of January 16th is a crime drama. It centers on a global financial fraud and includes a street hoodlum. What made the play popular was that the jury was drawn from the audience. Rand wrote two endings for the final act. A bad adaptation was created for the big screen, directed by William Clemens with a screenplay by Delmer Daves, Robert Pirosh, and Eve Greene.

“Though Rand was years away from articulating her own ideal, she had since childhood admired the individual who acts on his own judgments, defying social pressure. Thus the main characters in Night of January 16th are bold egoists who unapologetically seek the world’s rewards and pleasures for themselves.“Notably, however, this play’s heroes don’t embody Rand’s moral philosophy. ‘I do not think, nor did I think it when I wrote this play, that a swindler is a heroic character or that a respectable banker is a villain,’ she writes. ‘But for the purpose of dramatizing the conflict of independence versus conformity, a criminal — a social outcast — can be an eloquent symbol.’”  -- AynRand.org here.

The screen adaptation mangled the plot. Names were changed for no apparent reason. Elements were added that sidetracked the integration of actions and motives which is an essential element of Ayn Rand's fiction.


“The story revolves around three people; Tycoon Bjorn Faulkner, who is being called upon by his board of directors to explain a missing $20,000,000; Kit Lane, his secretary who also has a personal interest; and Steve Van Ruyle, a sailor who has inherited a position on Faulkner's board of directors. Faulkner is (presumably) murdered, and Kit is falsely accused of the murder. Steve assumes the job of clearing her name.” -- IMDB.com  “Van Ruyle attempts to prove Lane's innocence with fake evidence, but his ruse is discovered. The two flee with evidence from Faulkner's apartment, which they use to track down the mysterious Haraba. They trace him to a hotel in Havana, Cuba, where they discover that "Haraba" is a pseudonym being used by Faulkner, who has faked his own death. When Faulkner takes Lane captive, Van Ruyle rushes with police to Faulkner's room to rescue her. Faulkner is arrested, and Van Ruyle and Lane decide to get married.” – Wikipedia.

Ludwig Wittgenstein denied the validity of his Tractatus Logico-Philosophicus. He wrote it in the trenches while in the Austrian army. His military service did not protect him when the Nazis took over. He was forced to liquidate his family inheritance into gold and deliver it to the government in return for permission to emigrate to the UK. While in England, he worked out a different set of problems and solutions. He was accused of attacking Karl Popper with a fireplace poker. It is irrelevant today that both men were closet homosexuals.

But is possible to discuss Wittgenstein’s metaphysics and epistemology or Karl Popper’s The Open Society and Its Enemies, without having to answer for all of their philosophical errors or lifestyle foibles. Not so with Ayn Rand. She is a lightening rod. It was from a Theodore Sturgeon story that I learned that I am not the only one who falls in love where the lightening strikes.