When Roseanne Barr spoke at the Occupy Wall Street rallies on September 19, she called for a new "people-ism" that combines capitalism with socialism, which, actually, is the definition of fascism.  Barr denounced capitalism based on "that goddam Ayn Rand book."  She did not say which one she meant. 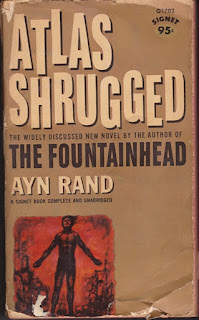 Atlas Shrugged is the easy answer.  The movie came out this year.  The book has been selling well ever since the Bush Bailouts.  The election of Barack Obama only fueled the engine, not so much because of Obama's own beliefs (though there is that), as his continuation of the domestic and foreign policies of the previous administration.  Objectivists are not conservatives.  To Ayn Rand, faith and force were mutually required aspects of mysticism and collectivism.  So, the strong news from Washington, regardless of the parties in power, could only echo passages in Atlas Shrugged.


But then I wondered, how about Introduction to the Objectivist Epistemology?  After all, Rand taught that any political system - and any change to one - must be based at least implicitly on a theory of knowledge. 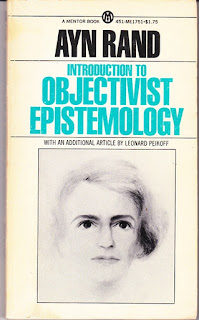 ﻿Moreover, in our post-modernist era, claims of objective knowledge are radically contrary to the intellectual mainstream.  Note that "objective" does not mean "absolute."  While absolutes do exist, human knowledge and human action are contextual.  Knowing right from wrong and acting rightly depends on what we commonly call "the scientific method."  Another label for that is rational-empiricism, which in classical academic philosophy is a synonym for objectivism (with a small o).  In short, theories are supported by facts; and facts are explained by theories.  In the famous words of Daniel Patrick Moynihan: "You have a right to your own opinion.  You do not have a right to your own facts."  It is an easy prediction that most of the anti-Wall Street protestors would claim both epistemological relativism and moral absolutism.
Over on Rebirth of Reason, artist and musician Joe Maurone offered The Virtue of Selfishness as perhaps the cogent reply.  The study of politics rests directly on the study of morality and ethics.  For Ayn Rand, selfishness had a specific meaning and  it is about the same as "enlightened self-interest."  Not every whim that pops into your head is in your best interest.  Morality does not begin with "I want" but with "It is."  In other words, morality rests on metaphysics.  But it is an easy bet that you would hard pressed to find adherants to an objective metaphysics  at these rallies.  For them, reality for you is not reality for me. 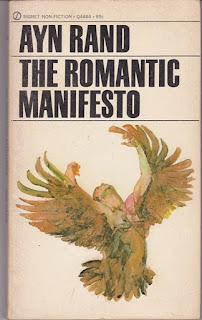 It is not likely that Roseanne Barr was denouncing The Romantic Manifesto, but she could have been.  Romantic fiction portrays heroic action by confident people.  It deals with conflicts of values, values that are stated explicitly.  Born in 1905, Alissa Rosenbaum (Ayn Rand) found her heroes in the works of Victor Hugo.  The college students drawn to her novels in the 1960s pointed to Casablanca, The Treasure of the Sierra Madre, and High Noon.  Today, posters on Objectivist message boards and blogs tout History Boys, The King's Speech and X-Men.  ... and debate the merits of John Aglialaro's Atlas Shrugged. 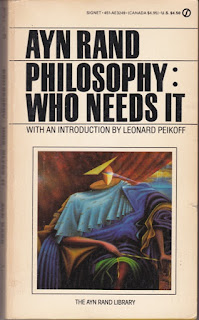 Certainly Roseanne Barr did not mean Philosophy: Who Need It?  She missed her shot.  The title essay was delivered to a graduating class at West Point.  In other essays in this book, Rand denounced duty and tied egalitarianism to inflation.  She also demonstrated that federal regulaton of communications (via the FCC) is nothing less than censorship. All of that might be too complicated and difficult for people who cheered Roseanne Barr. 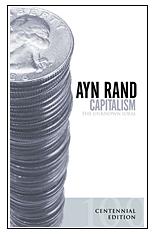 Capitalism: the Unknown Ideal is probably the other title that best would compete against Atlas Shrugged as a target for the ire of the Anti-Wall Street gang.  The defense of robber barons and child labor is clear enough, but the capstone would have to be Alan Greenspan's essay, "The Assault on Integrity" in which he explitictly asserts stock brokers as paragons of virtue.

"Securities worth hundreds of millions of dollars are traded every day over the telephone. The slightest doubt as to the trustworthiness of a broker's word or commitment would put him out of business overnight. Reputation, in an unregulated economy, is thus a major competitive tool." (CUI, page 113)

"Government regulations do not eliminate potentially dishonest individuals, but merely make their activities harder to detect or easier to hush up. Furthermore, the possibility of individual dishonesty applies to government employees fully as much as to any other group of men. " (CUI, page 115)

After defining capitalism as the only moral political system, Rand then identifies collectivism (not the profit motive) as the cause of war.  The third essay "America's Persecuted Minority: Big Business" hallmarks the book. 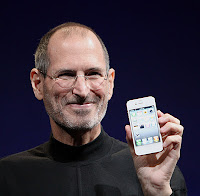 BTW:  Joe Maurone has a couple of efforts going.  Objectivish is one blog, and Space Player Music  is another presentation.  The picture he posted on RoR of The Virtue of Selfishness was from videos he shot of Occupy Philadelphia, to be found on Objectivish.
Posted by Michael E. Marotta at 1:49 PM