Private Security in the 21st Century

In J. Neil Schulman’s libertarian utopia Alongside Night, our hero, the son of a free market Nobel laureate economist, is on the run when he falls in love with the daughter of the director of the FBI.  He discovers an underground, both literal and figurative, and as the stormtroopers attack, the Boy and the Girl are separated.  He needs to find her, but the private security guards are directing people to safety.  He wants to argue, but they will have none of that. Rather than ordering him to obey the klaxon call to evacuate – which is what he expects – the guard asks him to stand aside for a moment until they can help him find his girlfriend. So it is with private security: we are not cops… at least, not ideally.

Today, supervisors in private security generally come from the world of public policing.  They follow the Guardian ethos.  However, as security services are increasingly for-profit enterprises, the future of market-driven security will evolve along a different line. 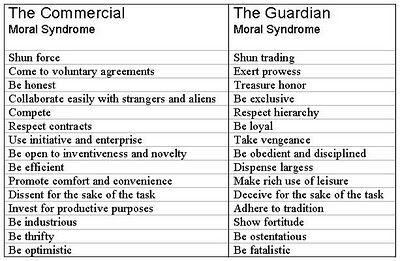 In Systems of Survival, (see here on this blog) Jane Jacobs outlined two moral syndromes: the Guardian, and the Trader.  They are often different expressions of the same virtues, but, also, often contrary in motives or opposite in goals.  The future of private security lies with eliminating as many of the "power" modes as possible and replacing them with "market" modes.

It is true that Guardians should not trade favors.  That way lies corruption.  However, many of the elements of the warrior path can be replaced with the merchant's course – and to the benefit and profit of the security provider, as well as to their clients and to their clients' communities of customers, who in retail are known as the ultimate consumers.