News traveled quickly within academic philosophy that on the night of October 25, 1946, in Room H3 (number 3; staircase H) of the Gibbs Building, at Kings College, Cambridge, Ludwig Wittgenstein and Karl Popper had gone at each other with red-hot fireplace pokers.  Of course, that is not what happened.  Yet, the true sequence of events remains uncertain and contested.

Wittgenstein’s Poker: The Story of a Ten-Minute Argument Between Two Great Philosophers by David Edmonds and John Eidinow (, 2001).

Juries are swayed by eye-witness testimony.  Yet it is highly unreliable – and is known to be subject to simple error as well as police misconduct and prosecutorial fraud.  Over the past 15 years, thanks largely to the Innocence Project, and the advocacy of academic criminologists, some changes in police procedure have been written into law.  However, on the streets, in the lock-ups, in the courtrooms across , at the local level, tradition rules.  (If you do not know the case of Jennifer Thompson and Ronald Cotton - “What Jennifer Saw” PBS Frontline show here – you need to understand the limits of witness identification.  The Innocence Project page on this case is here.)
·
In the matter of Wittgenstein’s Poker, an audience of perhaps 30 academics - students, dons, professors - fifteen professional philosophers at one of the world’s best universities, all of them at some level specialists in the theory of knowledge, did not agree on the details of a 10-minute drama.

Beneath this is the foundation of science.  Sir Karl Popper invented the theory of falsification, presenting it in his 1935 work, The Logic of Scientific Discovery.  Simply put, a broad theory based on some evidence can explain much.  Astrology works like that.  You are a Libra; your partner is a Capricorn.  You think you are in love, but the charts say you are incompatible.  An astrologer will delve into your rising signs and conjunctions and aspects, and ultimately can produce almost any result you want.  Popper felt that this was true of Freudian psychology, which he called a pseudo-science.  Science is subject to disproof.  According to Popper a complete theory suggests its own testable limits.  This was revolutionary in 1935 but is accepted without question today.

But social theories are largely not subject to disproof.  The failures of communism (and before that of fascism) are argued away by true believers, just as astrologers and creationists present ever more explanation to overcome difficulties.  (The easiest claim is that the was not practicing true communism, but only state capitalist revisionism.  Actual communism would be successful.  Any failure must not be real communism.)  Ultimately, this applies to radical feminism, to postmodernism, to the broad spectra of both the left and the right.  The true believer finds no reason to be tolerant of other opinions because they are not interested in being proved wrong in the search for truth.

That expresses Popper’s political philosophy, expounded in The Open Society and Its Enemies, for which he was knighted.  Written before World War II, but published only afterward, the book calls for tolerance based on ignorance.  We cannot know for certain that we are right.  Our ideas might be falsified.  Thus, we are mindful of the sensibilities of other people, even as we disagree.  In his essay “What Does the West Believe In?” (delivered as a lecture and then added to a compendium, In Search of a Better World: Lectures and Essays from Thirty Years) Popper notes that unlike the Marxists of that time, or too many other creeds and their variants, the West largely has no single doctrine.  The strength of our society, the source and expression of our freedom, is that we do not "believe in" any one thing.  Rather, we accept many things as being true, for as long as they stand up to scrutiny.

How then did Popper come to promote his idea of falsifiability?  What if it later were falsified?  That would be a paradox, of course, as is his intolerance of intoleration.  It is ironic, then, that he denied the validity of the ideas of Ludwig Wittgenstein.  Wittgenstein claimed that there are few (if any) real problems in philosophy, but only apparent problems from loose language.  Clarify your concepts and problems disappear.  Wittgenstein’s Tracticus Logico-Philosophicus was nicely organized in outline form and relied heavily on the symbolic logic of Russell and Whitehead.

The easy resolution is that word games aside (falsifying falsification; not tolerating intolerance), it is usually better to reserve judgment and be open to those who would prove you wrong. Ultimately, of course, right and wrong do exist; and the wrong is discarded for failing a single test, while the right stands up to probe after probe.  Unfortunately, the criminal justice system does not work that way.

The incident is described on pages 16-20 in Chapter 2, “Memories are Made of This.” 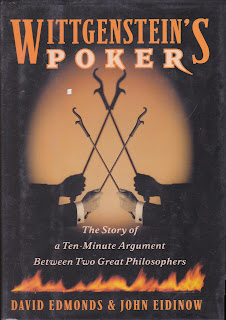 Both Popper and Wittgenstein are at the tops of their careers.  Both are accustomed to holding the attention of those to whom they speak. Popper is the guest speaker, but Wittgenstein will not yield.  They argue.

“Consider this poker,” Peter Geach hears Wittgenstein demand of Popper, picking up the poker and using it in a philosophical example.  But, as the discussion rages between them, Wittgenstein is not reducing the guest to silence (the impact he is accustomed to), nor the guest silencing him (ditto).  Finally, and only after having challenged assertion after assertion made by Popper, Wittgenstein gives up.  At some stage he must have risen to his feet, because Geach sees him walk back to his chair and sit down.  He is still holding the poker in his hand.  With a look of great exhaustion on his face, he leans back in his chair and stretches his arm toward the fireplace.  The poker drops to the the tiles of the hearth with a little rattle.  At his point, Geach’s attention is caught by the host, Richard Braithwaite.  Alarmed by Wittgenstein’s gesticulating with the poker, he is making his way in a crouching position through the audience.  He picks up the poker and somehow makes away with it.  Shortly afterward Wittgenstein rises to his feet in a huff, quietly leaves the meeting, shutting the door behind him.”

Michael Wolff sees that Wittgenstein has the poker idly in his hand ... Peter Munz watches Wittgenstein suddenly take the poker - red-hot - out of the fire and gesticulate with it in front of Popper’s face.  Then Russell - who so far has not spoken a word - takes the pipe out of his mouth and says firmly, “Wittgenstein, put down that poker at once!” His voice is high-pitched and somewhat scratchy.  Wittgenstein complies, then, after a short wait, gets up and walks out, slamming the door.   From where Peter Gray-Lucas is sitting, Wittgenstein seems to be growing very excited about what he obviously believes is Popper’s behavior and is waving the poker about. ...  Stephen Plaister, too, sees the poker raised. ... To Stephen Toulmin, sitting only six feet from Wittgenstein, nothing at all out of the ordinary is occurring; nothing that in hindsight would merit the term “incident."

According to and Eidinow, Hiram McLendon’s account is corroborated by Bertrand Russell: they remember that Wittgenstein became agitated, grabbed the poker and waved it.  John Vinelott supports Popper’s story published in 1974.  Popper recalled that when asked for an example of a moral principle, he replied, “Not threatening visiting lecturers with pokers.”  Defeated, Wittgenstein threw down the poker and stormed out.

Several points are at issue, not the least of which is the threat with a red-hot poker. Did Wittgenstein leave abruptly, slamming the door, after he asked Popper for an example of a moral rule?  According to most retellings, Wittgenstein left the room before Popper offered the example.  It may remain forever impossible to falsify any explanation of the events.