Aspasia of Miletus is easiest to find in the history of classical as the woman with whom Pericles lived after divorcing his wife.  In fact, in those days, what we call “philosophy” was known in as "the Milesian way” and it was Aspasia who brought it.  What we call the “Socratic method” should be the “Aspasian method” because young Socrates learned it at symposia held at her home. 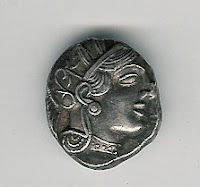 In the generation after the collapse of the Ionian Revolt refugees emigrated to .  ’ role in the defeat of brought honors, of course; but also, the dialects were similar.  They are commonly considered together: Attic-Ionian, different from Doric (at ), Aeolic (at ), and Arcadian-Cypriot.

Among the twelve Ionian cities were , , and Clazomenae.  was the home of Thales, who is credited with the first formal proof in geometry; and who is called the father of philosophy.  Samos was the home of Pythagoras, who had fled to Croton in southern long before the revolt.  Anaxagoras who taught astronomy to Pericles came from Clazomenae.

Anaxagoras found a meteorite that was seen falling; and he concluded that the sun is a hot rock.  For this, he was charged before the Athenian assembly with impiety for denying the divinity of the sun.  Aspasia was also tried for impiety.  This was also one of the charges against Socrates.  was not friendly to philosophy.  Pericles spoke unsuccessfully in defense of Anaxagoras.  Pericles apparently did better on behalf of Aspasia.  Ancient sources and modern interpretations all vary on the trial, but agree on the influence that Aspasia carried in .

In the 19th century, when education in Greek and Latin was still required, the romance between Pericles and Aspasia was a popular topic for novelists.  More recently, she regained the attention of feminist scholars.  Indeed, it may be cogent to consider Pericles only the largest satellite orbiting her.  Socrates is easily the best known in common culture today, but Protagoras of Abdera was undoubtedly another visitor in her home, as was the young Alcibiades. 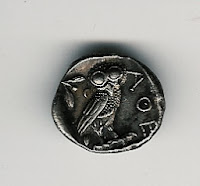 “Apasia (1) the Elder of Miletus, daughter of Axiochus, the most celebrated of the Greek Hetaerae. She came to where she gained the affection of Pericles, not more by her beauty than by her high mental accomplishments. Having parted with his wife, Pericles lived with Aspasia during the rest of his life. His enemies accused Aspasia of impiety and it required all of his personal influence to win her acquittal. The house of Aspasia was the center of the best literary and philosophical society of , and was frequented even by Socrates. On the death of Pericles (c. 429 BC), Aspasia is said to have attached herself to one Lysicles, a dealer in cattle, and to have made him by her instruction, a first rate orator.”

It is important, also, to understand what Dr. Smith meant by "heterae."  The word means "companion."  It has sexual connations, as well.  In her own time Aspasia was ridiculed as a brothel madame, a charge that is clearly theatrical hyperbole.  It nonetheless speaks to the status (or rather, the lack of it) held by women in classical Greece.
That paragraph was accompanied by a line drawing of a stele labeled ACΠACIA in late Hellenistic letters. A photograph of this funerary monument appears in Madeleine M. Henry's Prisoner of History: Aspasia of Miletus and Her Biographical Tradition.  Henry cites an article in Acta Classica by Peter Bicknell. Bicknell examines a stele given in Inscriptiones Graecae Vol. II Part 2, inscription number 7394 which he asserts shows the descendents of Apsasia.  According to Henry's accumulated evidence, Aspasia was born in about 470 BC. She was the younger sister of the woman married by Alcibiades the Elder (grandfather of the troublesome Alcibiades), whose ostracism from expired in 450. The family arrived to find the laws changed unfavorably against metics (foreign Greeks) and their descendents. Aspasia caught the eye of Pericles and the rest is history.

Madeleine M. Henry's Prisoner of History is an excellent summary and evaluation of the material available on Aspasia of Miletos. This is a work which will stand the test of time and which will be read 100 years from now. I am most impressed by the variety and detail of evidence which Henry has acquired in constructing this book.
Ancient was nothing without her metics. Among the foreign Greeks who came to the city, Anaxagoras and Aspasia were typical of the Ionians who made “the .”  It is no accident that both were associated with Pericles and that both were tried for impiety by his enemies and that neither was a citizen of .  The question then becomes: Why would intelligent people flock to to be treated as second-class beings, barely better than barbarians? When we examine the status of metics, we must consider the collateral status of women.  If Aspasia stands out as a special woman, then even a century later Aristotle stands out as a special foreigner.  No easy wrapper explains all of the facts, though the facts remain.

This point is easy to miss. Rhetoric is public speaking. In the Athenian democracy, any citizen could bring suit and any citizen could be selected to judge a trial. As democrats, the Athenian citizens were all public speakers.  Certainly the successful ones were.  As lampooned in The Clouds, Socrates taught how to use wrong logic to evade, deny, and disprove obvious truths. In our language, sophistry is spurious logic or shallow reasoning. However, what Aspasia taught was not merely projecting your voice, waving your hands, and acting for the back row. Aspasia taught logic. She brought from Miletos the way of thinking that gave us geometry. The conservative Athenians were unprepared and found themselves disadvantaged if not helpless.  They were used to pleading their case by direct statement. Aspasia taught the technique we call "Socratic inquiry." In short, she taught how to ask questions.

ASPASIA OF MILETOS -- A bibliography
(You will find her in Xenophon's Memorabilia and in his Economics, as well as Plato's “Menexenus,” and  Plutarch's “Life of Perikles.”
A limited preview of Madeleine Henry’s Prisoner of History is available on Google Books here.   The collection, Inscriptiones Graecae (Wikipedia here), was started in 1825 and continued by the .  It is now the work of the for Science (Berlin-Brandenburgische Akademie der Wissenschaften; German only homepage here).

ALSO ON NECESSARY FACTS
You Only Have to be Better to be Equal
She's Such a Geek!
Gregory Browne's Necessary Factual Truths
Slow Down and Think
The Simple Origins of Complexities