On my way to volunteer at a family resource center, I checked a bus stop for the routes and saw a tag for GIS (geographic information systems) on the back. I found more and took pictures which I sent to my professor for the graduate class in remote sensing, Dr. William F. Welsh.  I mentioned also that I joined a local D&D group and he sent back a link to a Salon story: "How Dungeons & Dragons Changed My Life" by Ethan Gilsdorf.


When I hit 40, I discovered my cache of D&D rule books and dice some two decades after I’d last laid eyes on it. Stirred by nostalgia, I wrote “Fantasy Freaks and Gaming Geeks,” a travel memoir/pop culture investigation that records a year spent “re-geeking” myself and reintegrating D&D and its ilk back into my life. Thanks to the widespread acceptance of gaming and fantasy subcultures — from “Lord of the Rings” to “Harry Potter” to MMOs (online role-playing games) like “World of Warcraft” (aka WoW) — that re-geeking was easier than I expected. 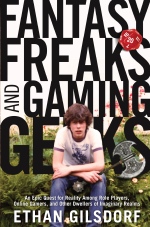 Ethan Gilsdorf wrote a book about it, Fantasy Freaks and Gaming Geeks.  In addition to his Salon posts, he has a very rich blog dedicated to the ins and outs of all things nerdly and geekish.

These are Tolkien-themed videos I shot in New Zealand: looking for hobbits in Hobbiton (Matamata); elves in Rivendell (Kaitoke Regional Park); Weta Workshop (Wellington); and a mash-up of footage from the "If you want him, come and claim him!" scene (Arrowtown). 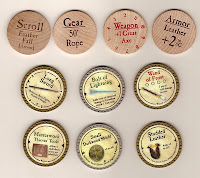 In his reply to my email, Bill Welsh said that he had been a big D&D gamer.  I was not surprised.  He was also not alone on the campus of Eastern Michigan University.  My professor for the undergrad class "Deviance and Society," Dr. Roger M. Kernsmith also studies the sociology of gaming.  Between the bachelor's and grad school, I wrote a column for the ANA's Numismatist magazine about "xeno-numismatics" the moneys of science fiction and fantasy.  Researching that, I discovered True Dungeons, a live action role-playing game (LARP) at Gen Con in Indianopolis run in a two-story dungeon.  I sent an email to Dr. Kernsmith, who replied, "I just came back from there."