My spatial reasoning scores are always lower than my verbal acuity grades. Consequently, the standard star charts for Lyra, a simple quadrilateral constellation marked by one of the brightest stars in the sky, has been oddly difficult to navigate. Therefore, I returned to basic methods. I have not yet found everything that I mapped out for discovery, but I am confident about the first half of the picture.

Although Lyra is supposed to be above Cygnus, clearly, to me, it is not. Of necessity, finding the double stars epsilon Lyrae and zeta Lyrae was a challenge. I have viewed and recorded the famous "double double" epsilon Lyrae several times. It is a target that I know. It is easily above and to the right of Vega.  ("Viewing Epsilon Lyrae" and "Binary Star Project" on this blog.)

Three of Lyra's stars near Vega are interesting doubles. Barely above Vega is 4th-magnitude Epsilon Lyrae, the Double-Double. Epsilon forms one corner of a roughly equilateral triangle with Vega and Zeta Lyrae. The triangle is less than 2° on a side, hardly the width of your thumb at arm's length.

Binoculars easily resolve Epsilon. And a 4-inch telescope at 100× or more should, during good seeing, resolve each of Epsilon's wide components into a tight pair.

Zeta is also a double star for binoculars. It's much closer and tougher, but is plainly resolved in a small telescope.

And Delta Lyrae, upper left of Zeta by a similar distance, is a much wider and easier binocular pair. Its stars are reddish orange and blue.

At first, I tried following the guides in support of my direct views in the telescope. But I came to understand that the rich star field offered other objects that could match the verbal descriptions.

So, I lay down on a chaise longue with my binoculars and drew out the sky as it appeared to me. And while doing that, I also was able to identify the binary stars, zeta and (of course) epsilon. 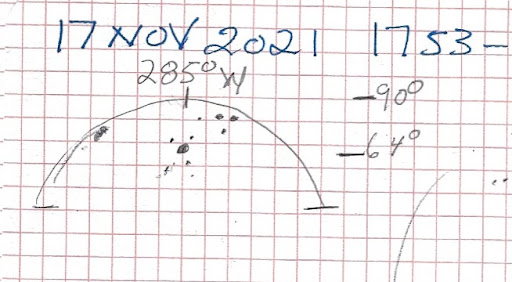 The cellphone Compass app is handy and the app for Measure includes a Level which is accurate enough for my purposes. 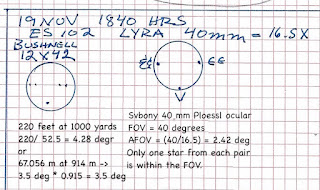 I also made estimates of the separations based on the field-of-view (FOV) calculations for the 12x42 Buhnell binocular, as well as the telescope I was using, my Explore Scientific 102-mm f/6.47 achromatic refractor.
That left me confident of those views though still open on the problem of locating delta Lyrae.
PREVIOUSLY ON NECESSARY FACTS

Copernicus on the Revolution of Heavenly Bodies

In Support of the Entry-Level Telescope