COPERNICUS ON THE REVOLUTION OF HEAVENLY BODIES

It was not just that Copernicus put the sun at the center of the heavenly system. His book asserted modern ideas about the relativity of motion, the acceleration of falling bodies, and the nature of the planets. It is also true that many of his arguments are archaic, typical of the medieval scholasticism that rested on the ancient Greeks. Nonetheless, his heliocentric model changed not just how people viewed the universe, but how they thought about it. 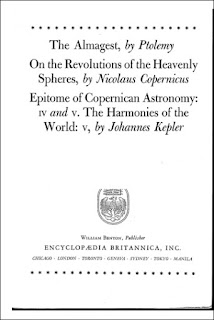 That motion is relative was known to the Greeks. Copernicus cites the Aeneid on the point-of-view that the land slips away as the ship moves past it. (page 519, EB “Great Books” edition). Fire burns brighter at lower altitudes; and when carried to higher altitudes, the fire dies down. (Book I Section; 8. 520, EB). Copernicus says as a matter of fact, not argument, that the planets are “dark bodies” that shine by reflected light. (Book I Section 10; Page 521 EB).

In our era, in school, we learn that Galileo discovered that bodies accelerate when they fall, contrary to Aristotle’s claim that they fall at a constant velocity, determined by their weight.  In fact, Copernicus acknowledged the acceleration of free fall.  In the original edition, Copernicus wrote: “Et quaecunquae decidunt a principio lentum facientia motu velocitatem augent cadendo.” That is rendered today as: "And those which fall downward possess a slow movement at the beginning but increase their velocity as they fall."(Book I Section 8. Page 520 EB)  See also Book III Section 3 where he mentions the motion of a pendulum being faster at the bottom of the arc and slower at the tops.

The acceleration of a body in free fall apparently was known to the “Oxford calculators” of the Merton School who worked about 1325-1350.  They developed a geometric solution for the “mean rate.” The “mean rate” is the average of the initial velocity and the final velocity. Galileo cited their results in The Two New Sciences, Third Day, Theorem I, Proposition I.

Most of On the Revolution of Heavenly Spheres is tedious for anyone not passionate about the geometric arguments. Copernicus had to prove his claims to the thinkers of his time in the language of their culture. The same was true of Newton’s Principia. Richard Feynman attempted to recreate a proof for his own lecture and found that he could not because he did not know enough geometry: we do it all with calculus now. Copernicus provides extensive ephemeris tables of his own measurements. But he also worked out trigonometric tables of “half-sines.” (We call it the “sine” in school, but it is actually the half.)  And he showed how his sun-centered circles explain all of the apparent motions in longitude, oppositions, retrograde, etc. And he often cited Ptolemy, who also made good measurements of the same events.

Copernicus’s On the Revolution of Heavenly Spheres is easily available in modern translations. Several archives have full scans of the original 1543 publication.
Made available electronically by the NASAAstrophysics Data System (ADS)
Here: http://ads.harvard.edu/books/1543droc.book/
The ADS wishes to acknowledge the Lehigh University, Digital Library ("The Problem of the Planets") for providing the scans of the book. (http://digital.lib.lehigh.edu/planets/ )