Start with the mount. Just as the scabbard called “Avalon” was more powerful than “Excalibur” (the blade it sheathed), the positioning mechanism (“mount”) is more important than the telescope. In every case here, you could keep the telescope, but throw out the mount. But any telescope is better than no telescope. Given the limitations, if $159 is your price point, then these will show the stars you cannot see.

The Meade mount is not easy to use. Altitude and Azimuth clutches must be very, very tight and even then, the azimuth does not work well when it works at all. At best I can turn the handle and at the same time nudge the telescope from the strut.

The mount and tripod of the National Geographic is a bad design. The altitude (or declination) is a twist knob screw drive and that works well. However, the thumbwheel for the right-left (azimuth or right ascension) was immovable with my left thumb, and jerky with my right.

Overall, the Meade is the best of three. I was disappointed in the Celestron because I had hoped to make good use of its longer 900 mm focal length. However, it did not stand up to simple backyard stargazing. The National Geographic was worst of the three. The objective lens was flawed, displaying ghost images from internal reflection. I already own a National Geographic that I was happy with and I bought this to test against it. The new one is not as good as the old one. The old one does not have ghosts.

The Meade and Celestron come with Kellner eyepieces, a basic three-element design from the 19th century. Today, the baseline is the Ploessl design, also from the 19th century, but a more sophisticated four lens system that became popular in the 1980s. Kellners are considered to be cheap downgrades for these entry-level instrument packages. The National Geographic Ploessl eyepieces are Bresser branded.

Overall, these do their best work with stars, not planets. With all three, among the first views were the Orion Nebula (Messier 42), resolving the interior Trapezium group, and then turning to the nearby open cluster Messier 41 (below Sirius). The last sessions were simple tours of the rich star field near Delta Cygni, the center of the Swan or Northern Cross. It was enjoyable because the area offers so many stars including red giants and binary stars.

Jupiter, Saturn, and Venus were all challenging and disappointing in all three telescopes. I could identify the planets. The rings of Saturn were easy to define. However, all were plagued by cloudy, foggy glare from the bright disks.

However, the Meade had a saving grace. It comes with an aperture reducer, a clever old hack from experienced observers, a mask--in this case a hole in the dust cover--which allows a limited cone of light increasing the focal ratio by reducing the aperture in order to bring out more details in planets, but at a cost of brightness.

After trying out all three in their "native mode" with the eyepieces provided in the package, I followed the advice offered by a customer service representative from Mile High Astro and tried them with my best oculars.

06 November 2021 Testing with the best oculars:

Saturn. 1 band north. 1 ring. Some hint of texture to the ring on the east side.

Titan? and Tethys? (It seemed so at the time, but the Sky & Telescope “Saturn” page (here) says no: these were just stars in the field.)

Jupiter. Hard to focus. Some chromatic aberration but north and south bands visible and some texture to equatorial region.

Jupiter. Hazy. Foggy. Near limit of resolution? (Inspected objective lens and diagonal prism for dew or condensation, but both were clear.)

Used aperture reducer. Sharper image. More detail on planet. Not as bright. But more detail in the equatorial between the bands North and South.

Sharp image. No bands visible. Titan (?) discernable though faint, of course and one more moon (?) behind the planet.

Lots of stars. Focus OK, not perfect, but close. Scanning area, settled on a red star at center and a discernable binary to the north or east. Lots of stars to look at in my Bortle 7-8 with no Milky Way. The telescope comes with a Modified Achromatic (Kellner) 26-mm, which is OK.

Celestron 70-mm AstroMaster with Vixen SLV 25-mm Delta Cygni region. (see above: The area is rich with targets to observe, record, and enjoy. This telescope comes with two eyepieces, 10mm and 20mm, which magnify too much (45X and 90X) for broad and wide fields such as this, the Pleiades, and the Moon.

Because the project began with the challenge to split the double-double of epsilon Lyrae with a 70-mm refractor, here are those notes. 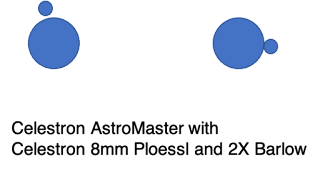 Note that northern members are touching. Western pair definitely separated. I tried the 6mm with 2X Barlow but it was just too hard to fight with the pan-tilt camera mount.

Galileo and Saturn: Epistemology, not Optics

Observing with NASA: An Open Platform for Citizen Science

Keep the telescopes. Throw away the mounts.

The right ascension gear does not work at all on the Meade. No matter how much I turn the handle, the telescope does not move.

The action on the Celestron pan-tilt handle is so tight that it lifts the tripod and telescope off the ground without moving the telescope up-down or -left-right.

So, I mounted each in turn to an Explore Scientific Twilight, which I use for my Explore 102-mm refractor. From there, I tested the optics. Both were all right for what they were. My original intention was to test these and then give them away. Now I want to keep them both. In truth, I will not keep these though they are temping as “grab-and-go” instruments.

Celestron 20mm and 10mm oculars: Orion Nebula is OK in each. Trapezium is easy to distinguish.

02:53 9mm. M42. Trapezium. Better contrast to the cloud than in the Celestron, perhaps because it is now higher in the sky.

03:02 6.3 mm on sigma Ori shows the double red pair. (This was impressive. I recorded this group earlier in the year but I saw the faint red paid for the first time on 29 October using my ES 102-mm.)

The Meade StarPro comes with a range of oculars - 26 mm, 12 mm, and 6.3 mm, and a 2X Barlow lens.
1940 hours. Finding e Lyrae easily with the 26mm, I stepped all the way down to the 6.3mm with 2X Barlow for an effective magnification of 222 before the view was acceptable though not unequivocal. At that magnification, it was dim, yellowish, and granular, past the threshold for good resolution. I noted that I could identify each star and its companion only because I knew what to expect. The pair on the right (corrected view) was separated but not on the left, only a bulge of light on the star disc.

1945 hours. Switched to Nagler 7mm with 2X Barlow from my Celestron Lens & Filter kit. No joy.

Celestron Astromaster 70-mm comes with a 10mm and a 20mm ocular and I did not bother with those time around having been there and done that with these when they first arrived.

1908 hours: Set up and aligned finder with Venus. Added Celestron neutral density filter (NDF “Moon filter”) to cut the glare of the planet and see phase. Also note that this is not a correcting diagonal, just a mirror. West was to the right and the bright side of Venus was to left (east).

Mount action is tight. It is easier to move the telescope by hand. Altitude (declination) control twist works better than the azimuth (right ascension) thumbwheel which is too tight.

2002 hours: epsilon Lyrae. Tried Nagler 7mm – more promise. Tantalizing but no, not yet.

2009 hours: epsilon Lyrae. Tried Celestron 14 mm – and can almost see the companions when the telescope shakes. This is a phenomenon I have read about: wiggling the telescope reveals details because the eye responds to motion.

2021 hours: Eta Cassiopeiai.  9.7mm Bresser with 2X Bresser Barlow. Identifiable only because I know what I was looking at. The image is a colored blob (vertical: blue-yellow-red) with another white dot to the right.

2033 hours: Saturn. Bresser 9.7 mm. Better gap between ring and planet. But planet has blue-yellow-red vertical chromatic aberration and a ghost image above.

2039 hours: Saturn. My old National Geographic with Bresser 26-mm. Saturn is clean and sharp. Yellow. The ring is crisp. Titan is a likely dot.

Side by Side: My old Natl G with the new Natl G. Both with Explore 26-mm Super Plössl.

2320 hours: Jupiter is not round. New and Old show the same problem, but the Old is not as pronounced.

2325 hours: Jupiter in the Old Natl G is round. So, was the problem the atmosphere?

Cloudy now for a few days.

Next tests on all three (new) 70-mm entry level refractors will be on the waxing crescent Moon this weekend Friday to Sunday 5-7 November.

Testing both with better oculars.

Celestron with 25mm Super Ploessl and two filters to cut glare of planet.

Both pairs work well. Nice views. Some aberration, glare mostly, not rainbows. Focus not always perfect. However, dark side of Venus is apparent.

Just makes it hard to see. Everything is dim. Less detail on planet.

Some markings visible along the equator north and south. Broad central band.

Jupiter. Nice view. Not much detail.

1938 8mm Celestron Ploessl. More detail and more aberration, not rainbow almost like Airy disks with glare rings around the image.

Searching for zeta Lyrae and delta Lyrae. No joy. Either I could not find them or they are not apparent in this arrangement.

Tried 6mm with Barlow but it was just too hard to fight with the pan-tilt camera mount. (See other notes. I called Mile High Astro and chatted with Zach over this when the scope first arrived. On his suggestion, I took it apart, loosened the fittings, cleaned off the Chinese grease, and lubricated the bearing. But it was not enough. It needs more better proper engagement.)

(Put the Celestron on the Meade mount for better working.)

Both stars are just colored blobs. No help.

Getting dewy. Packed up and took everything inside.