This is an on-going project.  My summary opinion after three nights is that for the observer, this is a planetarium show. You press the button, it shows you a star. It does make viewing easier. You spend more time looking at things rather than looking for them. These computerized "go to" motorized mounts are intended for photographers. Astrophotography--not my hobby--is all the rage, having grown over the past generation to eclipse mere stargazing.

The mount and tripod (just “mount” unless otherwise specified) arrived on Thursday, 2 September. However, I had a weekend project, contracting to edit a report for the Mayo Clinic. So, I put off setting it all up until Monday, the 6th. I also bought a battery for it, which arrived the day before and which I charged. I inspected the mount physically, and assembled it in my living room. I had to stop at the two-star alignment.

I bought the mount to work with two lightweight refractors, 12 lbs and 17 lbs. I also have a heavier (22 lb: 10 kg) reflector that I can put on this for collimating the mirrors. However, that telescope is too heavy for this mount, even though it is rated at 30 lbs (14 kg). For one thing, it comes with a 10-lb counterweight. That is something that you have to keep in mind when you read sales specifications: you have to subtract the counterweights from the specifications or add them to the weight of your payload. The saleslady at the retailer Woodland Hills Camera and Telescope of Los Angeles warned me that with eyepiece and finder, the 22-lb telescope would be too much for the motors.

I found the instructions to be clearly written, but not easy to read and understand. The small type and run-on paragraphs save space, probably left over from the days of saving paper, but make reading difficult.

My first adult telescope was a Celestron EQ-130 and I borrowed two larger instruments on German equatorial mounts from the local club. So, myself, I would start by aligning to North. I know from aviation that magnetic north is not true north and I know from astronomy that Polaris is 89 degrees and almost 16 minutes, but not at true north. You get close enough. The point here is that Alignment is on pages 14-16 but Polar alignment is on page 29. 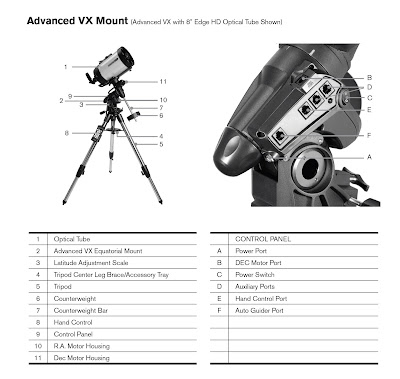 One item was missing. The chart and illustration did not indicate the RJ-11 input port for the declination control. I spent about 15 minutes searching, eventually with a flashlight. The port is behind the declination motor (of course) but hidden from view. All of the stamped surface labels are as flat black as the body they are on. Some of the RJ-11 auxiliary ports do have white press-on labels.

The next clear night was the 8th. I set up outside mindful of where I expected the neighbors’ yard lights to shine. As soon as I saw Vega and Antares (after 2007 hrs), I performed the two-star alignment as indicated. The menus will take some getting used to but at 2047 it was aligned. I selected the first Double Star target offered, 17 Cygni and sure enough, in the viewer was a classic double star. 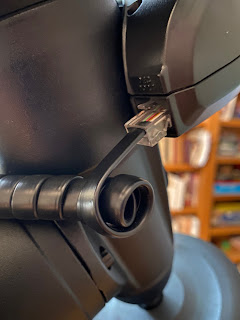 At 2050, Albireo; at 2051 epsilon Lyrae and I increased the magnification to 165X (8mm with 2X Barlow) and verified the double-double. At 2106 M22 was questionable: I could see a patch, but I was not persuaded. However, it tracked to Jupiter and then Saturn easily enough. So, I turned to a tough problem, Messier 4 just west of Antares. I have never been able to locate it manually. I did not locate it this time, either. I pressed Deep Sky and up-down arrowed to Messier and entered 004 and the telescope slewed and stopped. But I did not see anything in the field of view.

I could not figure out how to move the telescope manually. I kept hitting Back and tried the arrows, but it would not move. (On the shop floor we “jog” robots, but in astronomy “slue” telescopes which Celestron spells with the variant “slew.”) Anyway, I entered “No joy” for M4.

I also noted that the telescope was not perfectly aligned. That problem reappeared often over the next two nights.

I went inside for dinner and at 2326 powered up again. I had to realign from the start. Two nights later, I still have not found how to store the settings. It does remember some of them, but not all. Again, I chose Vega and Antares and then added two more calibration stars, Albireo and Deneb. I also found the Menu button to change the displayed list of stars.

Alternating the 17mm ocular (38.8X) and added 2X Barlow, I took the Sky Tour offered by the keypad.

The first stop was Sigma Cassiopeia, but I did not know what I was looking at. It was just a starfield. The pair did not stand out for me.

However, I had to jog the telescope into position. M31 was off to the far right. I apparently touched Back or something and I was able to slue the telescope to bring the object into the center of the field. At 77.6x M31 was very faint, which I attribute to the poor skies.

2348 – Omicron Capricorn, another binary, viewed with 13mm and 2X for 101.5x, but, again, I had to jog the instrument to bring the object into the center of the field of view.

I took everything down and brought it indoors.

In the morning, I took it all apart and put it all into its shipping cartons intending to find out what the returns policy is at Woodland Camera and Telescope. In the afternoon, I uncrated everything and set it up outdoors again. The second night went better.

1247 hrs – chose to compare M22 with M28 to verify my previous journal entries. (See “A Good Night Observing” from 1 August here. And I have an M22 coffee cup for the shoreline drive at Traverse City, Michigan). Also noted M54, M70, and M69 as targets moving east to west across the lower tier of Sagittarius. 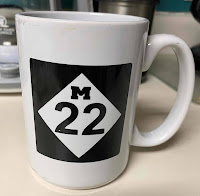 I fought with the telescope over alignment and finally went in, got the old Twilight Mount, and recentered the finder scope by targeting Jupiter. From that point on, the problems were not with me. Alignment is a two-step process. You pick the target from the menu and slue to it, then jog the telescope to put the target in the center of the finder. Then you press Enter. Then in a fine-tuning mode, you center the target in the eyepiece field of view and press Align. That’s why I went in for the old mount. I wanted to be dead-nuts-on because it wasn’t going well from the start.

At 2245 I ran a two-star alignment with Vega and Deneb and added Albireo and Altair. I suspect that these are all too close and the best alignment is with stars as far apart as possible. Oddly, I never see Polaris as a menu item.

At 2257: The mount positioned the telescope at M54, M69, and M70.  All were ghosts, mere hints. From numismatics, I learned optimistic grading of coins, so I could almost accept these details, but I logged all three as No Joy, again, probably because of the poor seeing conditions.

I then tried M25 and M18 both in Sagittarius and both empty fields which I logged as No Joy. Again, I could not get the mount to release control of the paddle to me. So, I moved on and selected Messier 30 in Capricorn. It was faint but discernable. Next were M11 in Scutum and M27 in Sagitta. The open cluster M29 near the center of Cygnus was one I stumbled upon previously and was easy to accept.

M30 in Capricorn was just a starfield, not the globular cluster I expected. The positioning might have been off as it would prove to get worse. I selected M27 the Dumbbell Nebula but I am not sure that it was in the field of view. Similarly, Messier 11 the “Wild Duck” cluster in Scutum merited only a question ? mark in my notebook.

At 2341, I selected eta Cassiopeia from the menu and it was just plain wrong. I lined it up in the finder, jogged to it with the controller, and focused in nicely. When I selected it from the menu the telescope slued to some nearby place of lesser interest.

At 2350, I chose Polaris from the menu and it was not in the field of view.

At 00:10 on 10 September, I jogged telescope to Polaris and tried a selection of higher magnifications to seek the binary companion. Even at 194X (17mm with 5x focal extender), I got a nice Airy disk, but no companion. This needs more aperture and I have recorded with an 8-inch Schmidt-Cassegrain borrowed from the local club.

00:30 I slued to a bright star in the high south, and pressed Identify and it was, indeed, Altair.

The weather brief put the dew point far below the 5:00 AM low temperature. So, I covered up the telescope, went indoors, and set my alarm for 02:30.

At 0251, I chose Uranus from the menu and was treated to an empty space with a few stars in the periphery, none of them bluish. So, I chose Jupiter. It missed completely, no mistake about that. Also, even though I left the telescope unattended for two hours, when I came back out, it was not in sleep mode.

Writing this and searching through the PDF of the user manual, I found this gem:

The mount has a re-alignment feature which allows you to replace any of the original alignment stars with a new star or celestial object. This can be useful in several situations: • If you are observing over a period of a few hours, you may notice that your original two alignment stars have drifted towards the west considerably. (Remember that stars are moving at a rate of 15° every hour). Aligning on a new star that is in the eastern part of the sky will improve your pointing accuracy, especially on objects in that part of the sky.

In other words, this is a feature, not a bug. I also found the Hibernate function. We are making progress. It will be clear again tonight and Saturday.

An Online Class in Astrophysics