Friday night, the 17th, I intended to be out through dawn, the sky being clear, albeit with a nearly full Moon. However, after some frustration, I took it all down and brought it all in at 23:30. This morning, I went through the user manual again. I relied on the PDF editor to locate places in the hardcopy to make my own notes. I am a little smarter now.

While working in the dark and wanting to actually view things, I have not always recorded the operations as I would if I were getting paid to write their user manual. This morning, I set it up (without telescope or counter-weight) to run through the menuing.

It is easy to crash the software. 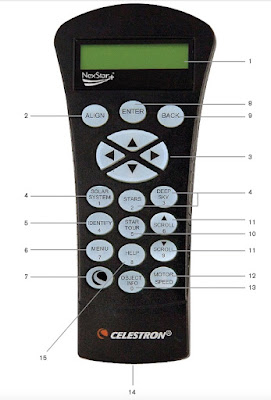 Running the test was easy because the mount has no internal power. The EEPROM (programmable memory) holds the last settings only. This morning, the onboard computer thought that this was still the night of the 17th. So, it was easy to program in 21:44:44 hours and today’s date. Considering the utility and cost of a wristwatch battery, I can only regard this as a major engineering oversight.

I did verify an undocumented feature. Holding the Back key clears the current menu (sometimes).

I found that accidentally on the night of the 16th 20:21 hrs. I had three stars in the alignment but could not find a good fourth star in the Menu. So, I was stuck in menuland, pressing Back and Back and Back and not finding a good target until I accidentally held the key a little longer. Oh! Ah! It is not in the documentation that you can do that.

As noted, I do not know the faux Arabic names of the stars. Loving languages (see here), I can tell myself that Rasalgethi and Rasalhague are the heads of something or someone and Denebalgedi and Denebola are tails. The burden  remains with me to learn them as I learned Zubenelgenubi and Zubenalschemali because I am a Scorpio. Just to note: The Object Info database does have the common name and the Graeco-Latin designation as the two line header for each target in the Star Catalog. So, that will help with the learning.

Also, the documentation does clearly explain the difference between the Four (4) key Identify and the Zero (0) key Object Info. That was my problem the other night and a problem I recorded earlier. I lined up on a brighter star near along the ecliptic, pressed either Identify or Object Info and then Enter and nothing happened. So, I pressed Back and Enter and the telescope took off for the first item in the list, Achird (Eta Cassiopeia).

Objectified: A Documentary About Design