This will be my ninth year as a judge at the Austin Energy Regional Science Festival. I found this film shelved in the non-fiction videos at my neighborhood branch public library. It was a lot of fun to watch. However, any adventure story will draw criticism from those who truly live the facts. So, too, does the broad treatment of this 90-minute documentary fail to reveal important details. That all being as it may, National Geographic delivered a good overview of the kids, their parents, and teachers. Although generalizations must fail in the face of individual histories, the film does show how necessary factual truths about the sociology of science play out.

First of all, the kids are individuals with their own motivations. Deeper still, curiosity is a primary. Some people have more of it than others. That motivation is a door which opens from the inside. As Howard Roark told Peter Keating in Ayn Rand’s The Fountainhead, in order to get things done for other people, you have to love the doing. Whether your goal is to mitigate the Zika virus or to build a flying wing—or to ship office supplies—the process itself must echo who you are on your own terms.

Kashfia Rahman found no visibility in her school. They had three gyms and a weight room and football team with a 0-9 record. Still, it was the coach who helped her when no other teacher would. That is all the more disturbing because she had taken 2nd place at the Intel International Science and Engineering Fair the year before. I sympathized and empathized. Austin, Texas, has a major university with Nobel laureates on the faculty, but they are hung like trophy heads in a man cave because this is a town with no science museum.

Moreover, two years in a row, it was an honor and a privilege for me to identify and promote an entrant in Behavioral and Social Science who had to turn to the University for help with statistics because none of her math or science teachers would make time for her. Through UT, she found graduate students who were interested in her work and who tutored her in mathematics.

I have seen that played out often. Talented students from rural schools do good work, but are not up to fifth place standards because they had no support at school or at home. No one would or could help them with the fit and finish and polish that let a good idea shine.

That subplot does play out in this documentary. All of the ISEF participantss were driven by their own internal engines of creation. And I see that in every entrant here at the Austin Energy Regional Science Festival. But Jericho High School had nine exhibits at ISEF because they had one teacher, Dr. Serena McCalla, dedicated to science research. On the other hand, Robbie Barrat did not place at ISEF—though he achieved much just in qualifying—and he did not get accepted to any of the colleges he applied to. His high school math teacher was less concerned with his interest in number theory than in the fact that he was not doing his homework. However, Robbie was hired by a Silicon Valley firm specifically because of his ISEF presentation on number theory.

That is another story line that was missing. Here at the Austin Energy Regional Science Festival, we have many special awards. Given out by the military, the Society of Women Engineers, and others, they are independent of the official rules and standards.

The documentary said nothing about the process of judging. The assumption that qualified working scientists objectively rate each competitor based on their presentation of their work is wrong on three premises.

First, the kids do not know in advance what category will give them the best visibility for an award. Sciences overlap: biology with chemistry, chemistry with physics, physics with engineering. Where do you place a project in environmental engineering that centers on an optically-based automatic data device invented by the student? You do not know what kinds of “scientists” or “engineers” will see your work.

On that score, the kids are pushing the limits of what we know. A working scientist or engineer knows their own field, but cannot know all of the event horizons that grab the interests of thousands of young geniuses. And they are geniuses, mostly because they are young. We know that about science and how it is practiced.

Second, judging is subjective. We follow a rubric. It is not all just willy-nilly touchy-feely, but the rubric is only a guide. Winners stand out. It is obvious by inspection. You know a good, solid experiment and presentation, and you know an exceptional one. That judgement does come from work experience, especially in STEM where everyone is smart, but some few are just a little smarter, work a little harder, worry a problem a little deeper. 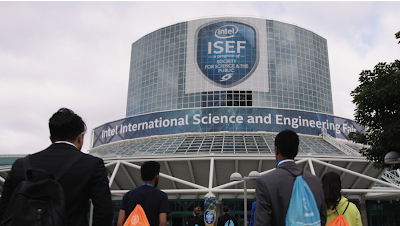 The arithmetic of judging winnows the best of the best into a winner-take-all competition. In a crowded field, a project will be narrowly surpassed by others just as good. Placed in a different category, someone who does not make fifth place might easily make third, second, or even first. Moreover, judging is subjective because it is a social event. I lost arguments about the facts of behavioral science to people with better social presence. Places are awarded to exhibits that have strong advocates.

Third, the documentary gave the false impression that the canned speech is a key to success. We do not stand and listen to a child recite a memorized sound bite. As soon as the sing-song starts, we cut them off with a question. We receive their abstracts in advance. They set up their boards the night before and once they leave the hall, we walk the floor and spend long minutes with each exhibit. We read their field notes and their binders. We read their boards. We run our own database searches and do our own thinking and reflecting. And we talk it all out among ourselves and find consensus. But it starts with shutting the child up and asking them questions to see what they really know based on what they did.

The only study guide based on this film that I found online (from the Chicago International Film Festival here) seemed to me to have been written by someone who was trying hard to make science and science fairs interesting, rather than by someone who actually finds them rewarding.
Among the very many resources online is this: “How to Answer the 5 Most Common Questions from a Science Fair Judge” (from Scientific American guest blogs).