A Numismatic History of Hungary

Nagyszüleim magyarok voltak. My grandparents were Hungarians. Actually, the empire being what it was, my grandmother's father was Croatian. Her maiden name was Kovanics (originally Covanic). My grandfather's passport to America said that he was "German-Hungarian." But I know nothing else about that. Growing up, English was the official language of the house. But you get some relatives together and someone says, "Please" and someone else says, "Thank you" and then "You're welcome." And everyone is speaking Hungarian... except the in-laws... and it goes back into English. (And we never hung out with the Marotta side of the family because they never got over the divorce.) 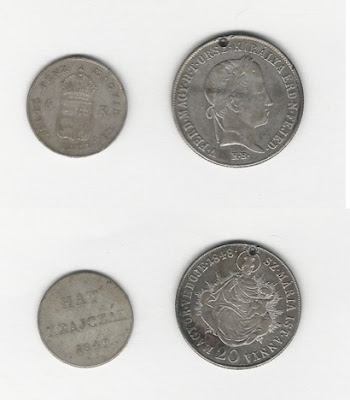 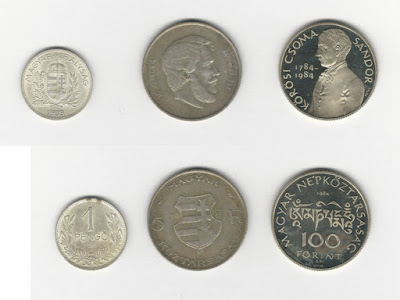 The Twentieth Century: Fascism... Communism...
Left MAGYAR KIRALYSAG (Hungarian Kingdom. Actually a fascist "regency" holding place for a missing king). 1 Pengö The word "pengö" while loosely derived perhaps from "pfennig" is an onomatopoeia for "bingle" meaning that it rang like silver versus collapsing like paper. This coin was 0.640 fine, 0.1029 troy oz actual silver weight.

Not that the Reds do not appreciate expediency. Center: Kossuth Lajos obverse; national coat of arms reverse. 5 Forint 1947 .1929 troy oz net silver as 12 grams 0.500 fine. (The coins of 1946 were 20 grams 0.835 fine Latin Monetary Standard but communism is expensive.) "MAGYAR KÖZTÁRSASÁG" (Hungarian Republic. But you need to understand the root word KÖZ as in  "community" and "collective" and from there to "village" and thence "public" things.

Far right. Commorative for Sándor Csoma de Kőrös who taught himself philology and then walked to Tibet in search of the ancestral home of the Hungarians. It was not there... but he did write the first western dictionary and grammar of the Tibetan language while in the employ of the British consulate. Reverse legend is MAGYAR NEPKÖZTÁRSASÁG (Hungarian People's Republic.) 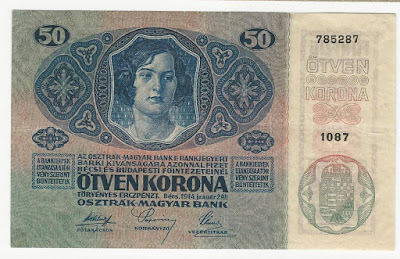 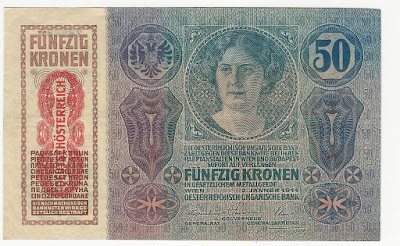 They lost the war, but could have won the peace.
It was just that fascism got in the way.
10 Pengö 1936 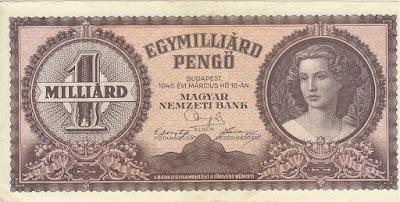 Inflation after World War II. Tied to Germany by ideology, Hungary killed her Jews and Gypsies and sent her soldiers to the Eastern Front. When she signed a separate peace with the USSR in 1945 to forestall a Russian occupation, Germany invaded Hungary and finished the job. Assuming that you can always make soup from the bones that were picked clean, the Russians moved in. One Billion... One Billion Millions... and 100, 000 New Billions. Gotta give the engraver credit for working through hard times.

10 Forint 1969. Face: Sándor Petőfi, national poet, revolutionary from 1848. Ironic on many levels as he likely died in Russia, captured after the Battle of Segesvar, when the Russians came to the aid of the Austrian monarchy.

PREVIOUSLY ON NECESSARY FACTS
Linguistics Debate: What Colors are Your Rainbow?
The Living Fish Swims Under Water
Forbidden Planet
My Grandmother and Science
Sándor Kőrösi Csoma
The Akkadian Roots of Modern Semitic Languages
Posted by Michael E. Marotta at 3:16 PM