We had a great time at the Texas Military Forces Museum Valentine’s dance. This year, we prepared by taking dancing lessons. I signed us up for membership and four Thursday nights of foxtrot with Austin Ballroom Dancing, a social club organized as a not-for-profit. In addition, we attended their open dances on alternate Saturday nights and also accepted an invitation to dance to a live band at a City of Austin senior center on Friday nights. It all helped. 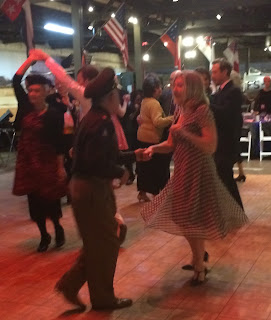 The evening was in 1940s style, with the Sentimental Journey Orchestra playing the music of Tommy Dorsey, Glenn Miller, and others. They were fronted by The Memphis Belles trio. About a third of the 150 attendees were dressed in era style. The event included a silent auction and a “Heads or Tails” contest to win a ride in a tank and fire a howitzer at the next reenactment.

America’s entry into World War II shifted our culture. By the end of the war, nearly a tenth (8.7%) of the total population was in the military. And that does not count those in the Red Cross, USO, and other support groups.

World War II was brewing long before the UK and France declared war on Germany in response to the German invasion of Poland on September 1, 1939. The Fortified Forties followed the Thrifty Thirties. The worldwide economic downturn created an easy podium for demagogues of the left and right. Both sides declared that capitalism was dead. 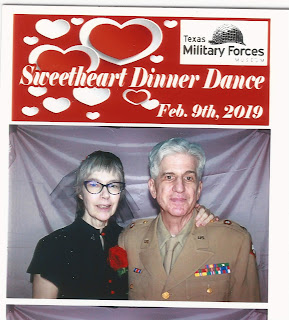 Leaders were everywhere. We all know the easy names: Hitler, Stalin, Mussolini, Franco. Other dictatorships ruled in Poland, Latvia, Lithuania, Estonia, Greece, Portugal, Romania, and Yugoslavia. Turkey was a one-party state especially tied to modernization and liberalization away from traditional Islamic culture. France proved that for them democracy was a failed experiment. In practice the French were embarrassingly cooperative with the Nazis until the success of D-Day made everyone a lifetime member of the underground. Adolph Hitler does not appear Aldous Huxley’s Brave New World, but Benito Hoover does, along with Mustafa Mond, Polly Trotsky, Lenina Crowne, and Bernard Marx. (For background on Huxley’s choices of character names based on Alfred Mond, Mustafa Atatürk, and others, see, for example, Shmoop here.) The future was collective. And the fact is that collectivism brings war.

America gave the President a third term and the New Deal attempted broad government initiatives. However, American cultural traditions of individualism, self-assertion, private enterprise, and rule of law within a constitutional framework that promised both majority rule and individual rights were the stable foundation that withstood the shocks of war. (The American Political Tradition by Richard Hofstadter is reviewed here.)

That political tradition was necessarily accompanied by culture of innovation. The inventions of the 19thcentury easily led to utopian predictions of material progress and prosperity. However, ultimately, the American Century was defined by innovations in entertainment. Life has meaning when we have the liberty to pursue happiness. Winning World War II on the basis of our industrial capacity was necessary but not sufficient. Our cinema and music conquered the world. There was a war on, but the music was swing. Gershwin defeated Wagner.