Industrial Medals a Currency of Fame 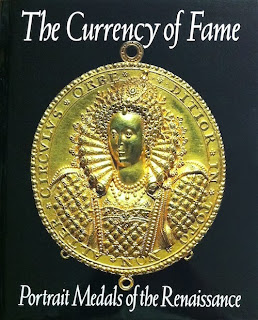 Most people call it “coin collecting” but numismatics is the art and science that studies the forms and uses of money. That includes money-like objects, which we call “exonumia.”  Examples occupy the latitudes from merchant tokens and bus and bridge tokens to medals including military orders, such as the Congressional Medal of Honor.  The art medal was invented in 1439 by Antonio di Puccio Pisano (called “Pisanello”). The occasion was for the Emperor at , John VIII Palaiologos, who came to Italian cities to negotiate treaties. (The standard reference is The Currency of Fame: Portrait Medals of the Renaissance by Stephen K. Scher, which is a catalog of the Frick Collection in the U.S. National Gallery of Art.)

The plethora of adverting exonumia has no easy taxonomy.  The Krause Standard Catalog of Tokens 1790-1900 by Russell Rulau assigns them to a dozen classes, but then must have another genus for mavericks. Within the classes – Advertising Checks, Counterstamped Coins, Poker Checks, Tool Checks, etc. – physical shapes exceed the limitations of Federal coinage: rectangles and hearts are statistical likelihoods.

was founded by the Denver & Rio Grande Railway in 1879. The railroad arrived in on August 5, 1881 and construction on the line to Silverton began in the fall of the same year. By July of 1882, the tracks to Silverton were completed, and the train began hauling both freight and passengers."The line was constructed to haul silver & gold ore from the , but passengers soon realized it was the view that was truly precious."This historic train has been in continuous operation for 131 years, carrying passengers behind vintage steam locomotives and rolling stock indigenous to the line. Relive the sights and sounds of yesteryear for a spectacular journey on board the Durango & Silverton Narrow Gauge Railroad."

All Aboard Magazine online here the official magazine of the Durango & Silverton Narrow Gauge Railroad.

Manufactured by Greenduck of Chicago (about that company here on E-Sylum of the Numismatic Bibliomania Society.)  One million given out at fair.

Though he began building machines in 1857, E. W. Bliss founded his firm in 1867. Reorganized several times, a vestige still operates as Bliss Clearing Niagara in , specializing in the repair and maintenance of industrial metal presses.  Bliss created primary production tools, machines that made other machines. They also produced military ammunition and a wide range of large and small containers made of sheet metal. For a short time around 1906, at their main office , plant they manufactured an automobile.
E. W. Bliss Company on Wikipedia here:
“Walkabout the Lords of Owl’s Head” at the Brownstoner blog.
“Torpedoes and Telegraph Codes” from the Brooklyn Public Library.
See also the online sales catalog of the Sterling Machinery company.
(Not to be confused with Bliss Machines, founded 1987 outside Buffalo New York by Bill and RandyKanner.)

Every artifact gives evidence to the full context of its culture. A spinner is a coin struck with a raised center point. On the reverse side, an arrow points outward. “You pay” it says. Nicer variations such as “You win!” mean the same thing.

Founded in 1852 by B. F. Jones and Bernard Lauth as the American Iron Company outside . James H. Laughlin bought out Lauth’s interest. Before 1861 and the firm was renamed in its new offices at Third & Ross in downtown .  Growing up in in the 1950s, our home was so close to the mills that late at night with the windows open, I could hear the yard engines working.  At its peak in the 1970s, the facilities employed 4,000 people and produced 3 million tons of steel annually.
See also Wikipedia here.

Harold M. Pitman founded the company in in 1907. Starting out by himself, he made and sold steel dies and copper plates to engravers. Pitman celebrated its 100th birthday in 2007. Agfa Gevaert Group acquired Pitman for $80 million on July 15, 2010.  The Pitman brand is still seen at 16 sales and operations offices in the .
Brief history from AgfaGevaert

"Faber-Castell, established in 1761 by the cabinet maker Kaspar Faber (1730-1784), is one of the oldest industrial companies in the world.  The company is the world’s leading manufacturer of wood-cased pencils with a varied range of products for writing, drawing and creative design, as well as decorative cosmetics. …  Today the eighth generation family member Count Anton-Wolfgang von Faber-Castell, who took over as head of the company in 1978, has been instrumental in new product development and the expansion of international activities."
Company website About Us here.

"One of its biggest eco-initiatives came in the mid-1980s, when the company started a sustainable tree-planting project in . Developed on former grassland and nowhere near the , the company-planted pine forest provides about 75% of Faber-Castell's wood. After the trees are cut down, they're quickly replaced with seedlings of fast-growing pine species.”
The Sierra Club here.

The application of steam engines and machine tools to coin production allowed industrial and commercial firms to celebrate their products, services, trades and crafts with coin-like objet’s d’art.  The first of these were the “British Provincial” series of the 1790s, mostly struck by the Soho Mint of James Watt and Mathew Boulton. In half-penny and penny size, they often promised to pay pounds sterling in return for 480 or 240 brought to  or . Their beauty, consistency and cost-efficiency eclipsed anything from the Royal Mint.

In , private tokens of the Jacksonian Era spoke to the politics of the day.  They skirted the laws against private money. “Millions for Defense NOT ONE CENT for Tribute” was a common reverse legend.  Through the nineteenth century, thousands of taverns, restaurants, and general merchandise retailers issued “Good-for” tokens.  Essentially, these were ad hoc currencies backed by the goods and services of the issuers.

In parallel to all of that, many coin-like items declared no value, but only announced the firm. Behind government money and private currencies, numismatics grants only a third place interest to these. Nevertheless, they continue a tradition from the Renaissance to honor oneself and to announce one's achievements to the world.