Money Without Banks and Governments

The Stock Market Crash of 1929 marked the onset of the Great Depression, but it took 30 months for the banks to fail. After all, the stock market had crashed often, sometimes twice in a decade. While the effects were not to be ignored, they were negligible in an agrarian, frontier society.  More than two years of government intervention were required before total economic collapse occurred. And even so, all that was missing was money. Most people had the same assets and liabilities that they held the day before and would hold the day after. What they needed was a medium of exchange. So, the Howell Board of Commerce issued "stamp scrip." In fact, perhaps 12,000 separate communities across the USA and Canada created a plethora of emergency currencies.


The First National Bank in Howell was placed in conservatorship on February 13, 1933. (Michigan governor William Comstock issued a midnight order to close all the banks, lest Henry Ford withdraw his money. Full story on Necessary Facts here.)  The Howell Trade Dollar was issued on February 22. Within two weeks, all 5000 notes were in circulation. This is telling because in order to get one, you had to spend $5. Some people bought automobiles in order to acquire many of them. Other people paid off accounts three years old. The notes circulated for 6 months and were widely regarded as having been successful.

What made this scrip special and subject to study on the national level is that it depended on the "velocity" of money. The holder of a note had to spend it every three days. When the note was spent, a 2-cent stamp was affixed to the back. After 52 transactions, the note was redeemed by the Howell Board of Commerce for a real dollar. (If the note was not spent, the holder still had to buy a 2-cent stamp.) The idea was to keep this money in circulation.  Stamp scrip in particular and alternative currencies in general were a special interest of Irving Fisher, the creator of the Chicago "monetist" school of economics championed by Milton Friedman. 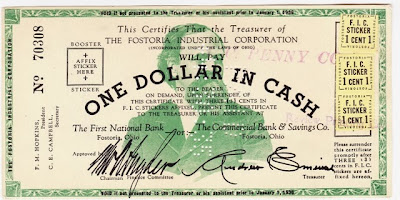 The back of this Fostoria, Ohio, scrip has a simple bank endoresement

The notes had a natural tendency to accumulate in the shops of retail merchants. Therefore, they were sold to businesses, school boards, etc., at a 5% discount. Citizens Insurance of Howell was one of many businesses to pay wages in Howell Trade Dollars.

Some of the details of how the scrip was actually used are no longer clear. Some issues show some kind of tally. It is not likely that these are final evaluations, since about half the places are still open. Many of the stamps have double zeroes written across them. The tallies could represent the whole dollar value of the purchase which necessitated the stamp. If so, the 00 would indicate that the stamp was bought as a penalty for holding the note without spending it.

Also, according to the legends on the back of the note, stamps were required every 10 days. The notes seem to have been intended to circulate from July 25, 1933 to December 6, 1934, a total of 509 days, 519 allowing for a 10-day period before the first stamp was due.

During economic depressions, people invent new forms of money to fill the gaps. Two from the 1990s were Time Dollars and Bone Money.

Ithaca, New York, has developed a local currency called "Time Dollars." People there trade services in units of an hour with an hour being worth about $10 more or less. The idea of Time Dollars has been copied by other communities in both the United States and England. As of this moment, Ithaca Hours are alive and well, celebrating over 20 years of continuous use. (See their website here.)

During the Autumn of 1993, people in Berlin saw the arrival of so-called Bone Money, "Knochengeld". The paper notes originated in the Prenzlauer Berg district. This neighborhood is popular with young artists and writers, similar to New York City's Greenwich Village or the Left Bank of Paris.

They called it "bone money" because the numbers were designed in the form of bones. Neighborhood retailers and restaurants accepted these notes. The experiment ran for three months. Then, the remaining notes were sold at an auction to raise money for charity.

Time dollars and bone money may not take the place of the coins and bills you carry, but they have certainly earned their place in history along with wooden nickels, prosperity scrip and Hard Times tokens which were invented during other economic recessions.

The Art of Finance
Numismatics: History as Market
Forgery and Fraud in Numismatics
William Sheldon: Psychologist, Numismatist, and Thief
Scripophily