“Our imagination is stretched to the utmost, not, as in fiction, to imagine things which are not really there, but just to comprehend those which are there.” – Richard Feynman

James Gleick’s biography begins by correcting some of the myths about Feynman.  Feynman created some of them himself, of course.  Overall, the book is yet another tribute.  Gleick fills in the narrative that Feynman left out of the two popularizations of his life, Surely You’re Joking Mr. Feynman and What Do You Care What Other People Think?

Underlying and beyond the stories Gleick explains the physics, as best as can be done, in colloquial English.  Motivated, I browsed the stacks at the Austin Public Library and checked out Quantum Field Theory Demystified by David McMahon and Understanding Quantum Mechanics by Roland Omnès.  Both were approximately the kind of book a physics major would read over the summer before the sophomore year.  Though I renewed the check-out, after five weeks, I still did not get much, but gleaned what I could.  Relevant here is the fact that just as the Pythagorean Theorem can be shown synthetically and analytically, the truths in quantum mechanics can be expressed with three different methods: wave equations, statistical equations, and Feynman path integrals.  Gleick devotes considerable effort to explaining Feynman’s work, given that the intended audience is people who like physics, but really do not understand it. 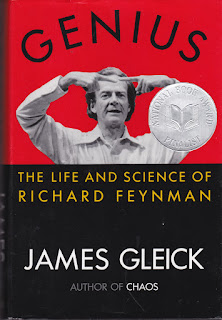 Feynman’s influence on the wider culture can be measured by the Austin Public Library’s catalog of 30 entries (granted that several are both books and talking books). (Alphabetical ignoring leading articles: The Meaning of It All under M.)

The Character of Physical Law came from a series of lectures for a general audience at Cornell.  But if you read the narrative in The Feynman Lectures on Physics, you hear the same tone of voice.  His graduation address on “Cargo Cult Science” is another example of subtle ideas presented unequivocally for a general audience. Videos of Feynman are on YouTube.

In Feynman’s Lost Lecture Feynman says that he wanted to show his class how derived his proof of Kepler’s Laws.  He could not do it.  Feynman could not work out for himself, independently, the geometry that knew.  Calculus makes everything so much easier – and so much more mathematics has been discovered – that we no longer learn geometry in such depth.

Wikipedia provides the best explanation of the .  No trigonometry book today presents the expanse and detail that I learned 50 years ago.  Of course high school mathematics has been dumbed down by the Soviet agriculture model of education.  More to the point, perhaps, today’s crafts workers no longer compute slopes in 32nds of an inch. With calculators and computers we have other things to do with our time.

But Feynman did not.  He thought long and hard about physics, filling notebooks with ideas that should have been published.  Some were.  Other physicists made some of the same discoveries.  It was inevitable.  After constructing an animated narrative about Feynman, Gleick pauses to wonder about genius.  Other Nobel laureate physicists identified Feynman as special.  What does that mean?  What is genius?  Ultimately, Gleick has no answer, though he does offer answers (plural).

The word genius as we understand it comes from the Enlightenment. Prior to that, a genius was only a jin or jinni, that is, a spirit; and it usually represented the Spirit of the People. (We know this, also, from old numismatic catalogs.)  Only through the latter 1700s as romanticism evolved did the word apply to the spirit of an individual.  Also, of course, at this time, that spirit was ineffable, not to be reduced to causal explanation.  Later, genius was associated, compared, and contrasted with madness.  Today, we have no objective measure of mere intelligence.   So, all we can say of genius is that you know it when you see it, the same test that differentiates pornography from art.