Sunny has adapted well to the routine. She no longer exhibits so many symptoms of PTSD. Now she likes being petted. She is still an indoor cat, though she has been outside a couple of times. She found the underside of the back porch and the hole in the fence. But she came home quickly at the sound of food. 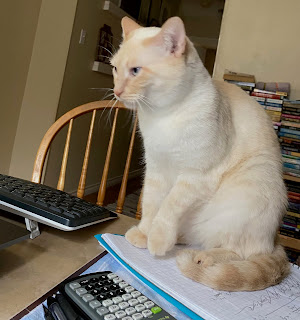 She discovered the other cat in the refrigerator door and the TV when it is off. I keep exercise mats back there and when I reached over the TV to pull them out her worldview shifted. But she accepts the TV for whatever it is. Much of my perception of cats as pets is based on Fantastic Planet, an animated adult presentation about humans on a planet orbiting Sirius. (Wikipedia here. ) That is from the cat’s point of view, perhaps.

From our side, I consider Cordwainer Smith’s “Game of Rat and Dragon” and Fritz Leiber’s “Spacetime for Springers.” Larry Niven’s Ringworld Trilogy had Speaker-to-Animals, and we did have cats named Squeaker-to-Animals and Kzinti Warfish, but the cat(s) in that series are  anthropomorphized.