Astrophotography: What He Meant by What He Said

Having retired from the Texas State Guard and leaving numismatics to take second place, I have been giving more attention to astronomy. I participate in The Sky Searchers discussion forum for amateur astronomy. The moderators launched this after their first site, The International Astronomy Forum, was overwhelmed by malicious software seeking user information (“malware bots”). After a few posts in the original forum five years ago, I left it and only returned to the new forum in November.

One aspect of a hobby is that the learning is often informal. Even though astronomy is taught in college, how it is practiced by those who earn their living in other areas brings a lot of jargon. Numismatics is like that, also. I just earned my 25-year pin from the ANA, but also just figured out that on discussion boards, LCS stands for “local coin store.”

Earlier this week, on the Sky Searchers, I read a post that sent me on a five-hour homework assignment  It started here: 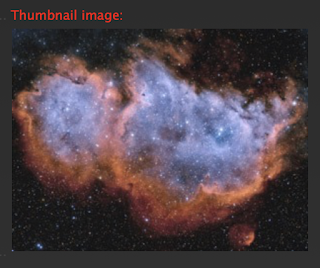 Here is a bicolor narrow band image of the [sic] The "Soul Nebula" (IC 1848, Sh2-199). The full IC 1848 (cluster plus nebulosity) seems to be a widely studied star forming region - the Simbad database turns up many young stellar objects and candidate YSO's. There are three Collinder clusters, several LBNs, and several Sharpless objects in this image field.

The Heart and Soul nebulae are seen in this infrared mosaic from NASA's Wide-field Infrared Survey Explorer, or WISE. The image covers an area of the sky over ten times as wide as the full moon and eight times as high (5.5 x 3.9 degrees) in the constellation Cassiopeia.
Located about 6,000 light-years from Earth, the Heart and Soul nebulae form a vast star-forming complex that makes up part of the Perseus spiral arm of our Milky Way galaxy. The nebula to the right is the Heart, designated IC 1805 and named after its resemblance to a human heart. To the left is the Soul nebula, also known as the Embryo nebula, IC 1848 or W5. The Perseus arm lies further from the center of the Milky Way than the arm that contains our sun. The Heart and Soul nebulae stretch out nearly 580 light-years across, covering a small portion of the diameter of the Milky Way, which is roughly 100,000 light-years across.
The two nebulae are both massive star-making factories, marked by giant bubbles that were blown into surrounding dust by radiation and winds from the stars. WISE's infrared vision allows it to see into the cooler and dustier crevices of clouds like these, where gas and dust are just beginning to collect into new stars. These stars are less than a few million of years old -- youngsters in comparison to stars like the sun, which is nearly 5 billion years old.
Also visible near the bottom of this image are two galaxies, Maffei 1 and Maffei 2. Both galaxies contain billions of stars and, at about 10 million light-years away, are well outside our Milky Way yet relatively close compared to most galaxies. Maffei 1 is the bluish elliptical object and Maffei 2 is the spiral galaxy.
All four infrared detectors aboard WISE were used to make this image. Color is representational: blue and cyan represent infrared light at wavelengths of 3.4 and 4.6 microns, which is dominated by light from stars. Green and red represent light at 12 and 22 microns, which is mostly light from warm dust.
https://www.nasa.gov/mission_pages/WISE/multimedia/wiseimage20100524.html

jmt92130 wrote: (IC 1848, Sh2-199).
IC — Index Catalogue
IC I — Index Catalogue I
IC II — Index Catalogue II
The first major update to the NGC is the Index Catalogue of Nebulae and Clusters of Stars (abbreviated as IC), published in two parts by Dreyer in 1895 (IC I,[5] containing 1,520 objects) and 1908 (IC II,[6] containing 3,866 objects). It serves as a supplement to the NGC, and contains an additional 5,386 objects, collectively known as the IC objects. It summarizes the discoveries of galaxies, clusters and nebulae between 1888 and 1907, most of them made possible by photography. A list of corrections to the IC was published in 1912.[7]
https://en.wikipedia.org/wiki/New_General_Catalogue#Index_Catalogue

(My turn to apologize: I already knew that NGC is the New General Catalog, a 19th century compilation of sky objects.).

The Sharpless catalog is a list of 313 H II regions (emission nebulae) intended to be comprehensive north of declination −27°. (It does include some nebulae south of that declination as well.) The first edition was published in 1953 with 142 objects (Sh1), and the second and final version was published by US astronomer Stewart Sharpless in 1959 with 312 objects. Sharpless also includes some planetary nebulae and supernova remnants, in addition to H II regions.[1]
https://en.wikipedia.org/wiki/Sharpless_catalog

The SIMBAD astronomical database provides basic data, cross-identifications, bibliography and measurements for astronomical objects outside the solar system.
SIMBAD can be queried by object name, coordinates and various criteria. Lists of objects and scripts can be submitted.
Links to some other on-line services are also provided.

If the Simbad database was helpful for your research work,
the following acknowledgment would be appreciated:
This research has made use of the SIMBAD database,
operated at CDS, Strasbourg, France
2000,A&AS,143,9 , "The SIMBAD astronomical database", Wenger et al.
http://simbad.u-strasbg.fr/simbad/

In astronomy, the Collinder catalog is a catalog of 471 open clusters by Swedish astronomer Per Collinder. It was published in 1931 as an appendix to Collinder's paper On structural properties of open galactic clusters and their spatial distribution.[1] Catalog objects are denoted by Collinder, e.g. "Collinder 399". Dated prefixes include as Col + catalog number, or Cr + catalog number, e.g. "Cr 399".[2]
https://en.wikipedia.org/wiki/Collinder_catalog

The Collinder catalog was published originally in the Annals of the Observatory of Lund.

Objects listed in the catalogue are numbered with the prefix LBN (not to be confused with LDN, or Lynds' Catalogue of Dark Nebulae), though, many entries also have other designations, for example, LBN 974, the Orion Nebula is also known as M42 and NGC 1976.

It was originally compiled in the 1960s by Beverly Lynds.[1] Objects in the catalogue include (among other things) the coordinates of nebulae, brightness from 1-6 (with 1 being the brightness), colour and size and cross-references to other astronomical catalogues if listed elsewhere.[2]
https://en.wikipedia.org/wiki/Lynds%27_Catalogue_of_Bright_Nebulae

The Lynds' Catalog of Bright Nebulae lists the coordinates of the center of the cloud, the dimensions of the nebulae as measured on the photograph on which it appeared at its brightest, the area of nebulosity in square degrees, color as compared between the blue and red Palomar plates, a brightness index on a scale from 1 to 6, an identification number that indicates the complexity of the nebulosity, and a cross reference to NGC (Cat. <VII.1>), Index Catalogue (IC), Sharpless (1959) Catalogue of HII Regions (Cat. <VII/20>), Cederblad (1956) Catalogue of Diffuse Galactic Nebulae, and Dorschner and Gurtler (1963).
https://heasarc.gsfc.nasa.gov/W3Browse/nebula-catalog/lbn.html
jmt92130 wrote: Sharpless objects
See above Sharpless Catalog.

[MEM -- O III is an astronomical term for what chemists and others call O++ doubly ionized oxygen. (It was originally thought to be evidence of a new element, dubbed “nebulium.”)]

Viewed in a narrow slice of the spectrum centered in the ruby-red H-alpha line, the Sun throbs with activity.
H-alpha filters work by rejecting all but the narrow sliver of H-alpha light.
https://www.skyandtelescope.com/observing/guide-to-observing-the-sun-in-h-alpha092321050923/
H-alpha (Hα) is a specific deep-red visible spectral line in the Balmer series with a wavelength of 656.28 nm in air; it occurs when a hydrogen electron falls from its third to second lowest energy level. H-alpha light is the brightest hydrogen line in the visible spectral range. It is important to astronomers as it is emitted by many emission nebulae and can be used to observe features in the Sun's atmosphere, including solar prominences and the chromosphere.
https://en.wikipedia.org/wiki/H-alpha

Pleiades Astrophoto is a software development company based in Spain, Europe. We work to provide cutting edge image processing and analysis tools for a broad range of technical imaging applications. We design and implement novel paradigms and innovative methodologies.
PixInsight is our main development project.
https://www.pixinsight.com/about/index.html

jmt92130 wrote: … bicolor…
Modified Bicolor Technique for combining Ha and OIII images
All Images and Content  Copyright Steve Cannistra unless otherwise noted.
Brief overview:  Ha is used for the R channel, and OIII is used for the B channel.  The synthetic green channel is created by multiplying the OIII layer with the Ha layer.  Construction of the color composite is done using the layer method in Photoshop CS and should be followed exactly as described for best results.  http://www.starrywonders.com/bicolortechniquenew.html

jmt92130 wrote: RGB data
[MEM - Red-Green-Blue Image processing in both astrophotography and Earth-based geographic information systems (GIS) rely on a well-developed theory and technology based in the physiology of sight and the physics of light. (I completed my MA in social science with two graduate classes in geographic information systems, then worked the following summer as a contractor, writing laboratory learning instructions.) Another system common in our office printers is CMYK: Cyan Magenta Yellow Black. Recall that the primary (“rainbow”) colors are Red, Orange, Yellow, Green, Blue, and Violet. The primary pigments (paints, crayons) are red, yellow, and blue. Pigments reflect one color and absorb all others. We get green pigment by mixing yellow and blue. In color processing from light in RGB, yellow comes from mixing 100% Red with 100% Green.] 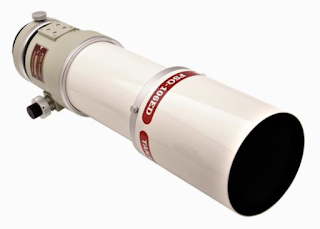 jmt92130 wrote: Location: DAA Observatory, Shelter Valley, CA,
(Desert Astronomy Association - DAA)
Desert Astronomy Association Observatory Campus
March 1, 2019
DAA is a small association of astronomers who have established an astronomy campus in the East San Diego County high desert area. DAA location is in a small privately held community property in the middle of the Anza Borrego Desert State Park. The park is the largest in California at 585,930 acres and listed in the top ten state parks in the United States (InterExchange.org). The skies are reasonably dark (Bortle 3) at the DAA location. A Dark Sky community (Borrego Springs, Bortle 4) is located about 15 miles away and is also surrounded by the state park.
http://www.jthommes.com/Astro/Observatory.htm
https://www.cloudynights.com/topic/652570-daa-observatory-campus/ 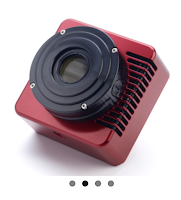 CCD is a charge-coupled device, a semi-conductor chip.
https://en.wikipedia.org/wiki/Charge-coupled_device

jmt92130 wrote: LRGB Filters
Luminance, Red, Green and Blue filters.
[MEM - Luminance filters just block all white light unselectively. The common “moon filter” is an example of that. We use them on our telescopes to reduce the brightness of a full moon.]

jmt92130 wrote:  Winsorized Sigma Clipping
Winsorizing or winsorization is the transformation of statistics by limiting extreme values in the statistical data to reduce the effect of possibly spurious outliers. It is named after the engineer-turned-biostatistician Charles P. Winsor (1895–1951). The effect is the same as clipping in signal processing.
https://en.wikipedia.org/wiki/Winsorizing

Suppose you have a set of data. Compute its median m and its standard deviation sigma. Keep only the data that falls in the range (m-a*sigma,m+a*sigma) for some value of a, and discard everything else. This is one iteration of sigma clipping. Continue to iterate a predetermined number of times, and/or stop when the relative reduction in the value of sigma is small.

Sigma clipping is geared toward removing outliers, to allow for a more robust (i.e. resistant to outliers) estimation of, say, the mean of the distribution. So it's applicable to data where you expect to find outliers.
https://stackoverflow.com/questions/45666970/what-is-sigma-clipping-how-do-you-know-when-to-apply-it

Non linear stretching is the work horse for producing "pretty pictures" with astrophotography.  This process completely destroys the data for any scientific use and is frowned upon by some purists.  However, this is the only way to simultaneously show the faint and bright detail. Here's how to do it.  http://bf-astro.com/non-linearCurves.htm

[MEM - Normalization and gradient removal are manipulations that take out extreme data, such as objects that are much brighter than others nearby.]

HOO is really H-sub infinity.
H∞ techniques have the advantage over classical control techniques in that they are readily applicable to problems involving multivariate systems with cross-coupling between channels; disadvantages of H∞ techniques include the level of mathematical understanding needed to apply them successfully and the need for a reasonably good model of the system to be controlled. -- https://en.wikipedia.org/wiki/H-infinity_methods_in_control_theory