Of course, it is all about us, the writers, along with our editors and publishers and the illustrators they (and we) hire to tart up our prose and poetry. But the table fees charged to dealers pay for all of that. Show memberships (gate receipts) are just an additional fraction. 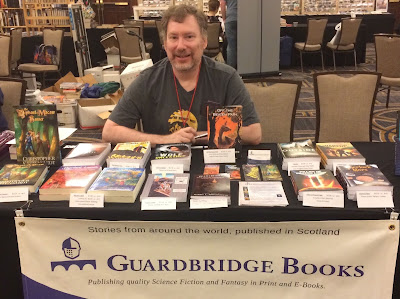 In these days of self-published ebooks on Amazon, the relationships between writers and publishers are fluid. It was developing for about 20 or 25 years as printing continued to automate. But today, the work you want the publisher to do for you is a matter of contract. The author has as much bargaining power as the publisher. 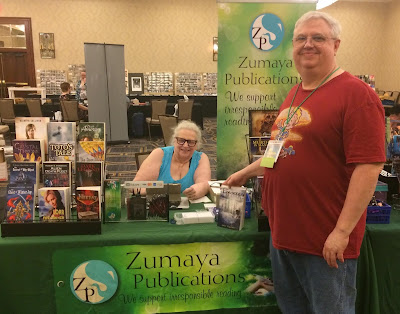 It used to be that the author got an advance on sales and against that royalities of about 20% from those sales. The publisher issued press releases, scheduled radio interviews and perhaps signings in bookstores. But typically the advance did not cover royalties. A year or two later, the publisher would ask when your next manuscript will be ready and you would promise a date. You just smoked your second cigarette.
Now, the author has many choices for taking on parts of the work they can do in our interconnected age. The publisher does other work. The royality split is negotiable. But self-publishing is now commercially viable. The concept of "books printed on demand" goes back to the late 20th century. Here and now, printers are consumable devices, not people. And with Kindle, iPad, and their competitors and who needs paper?


But I have an old friend with 20 books on Amazon and he cannot afford a car. For all the time and effort in formating for ebooks, you still have to finesse the advertising and publicity.  Our nation's motto is E pluribus unum. Literally, of course, it is From many one. I translate it as One out of many, i.e., just one in a million.  If you want to be seen and heard, you have to stand out from the crowd.


Sometimes that can mean finding the right crowd to be among. Science fiction is a genre of literature but it is also a culture, a community. The same is true of mysteries and romance. Unlike so-called "mainstream" authors of the New York Times Best Seller list, as a writer, you start out with a audience looking for you.
I worked with a technical writer who was doing it just because it paid the bills. He had no passion for the art. His heart was in his novels. He wrote two but has not sold them because "they are not ready yet." I have placed over 300 magazine articles because long ago I took Robert Heinlein's advice to never let a story sit unsold. If it is rejected, send out it to another periodical. Today, despite the weakening of periodical literature in hard copy, some book publishers still produce anthologies; and not every story is a reprint. It is another venue for the writer.
Writing is an enterprise. However, our capitalist society suffers from an anti-capitalist mentality. Ludwig von Mises pointed out the duality in the success of murder mysteries that portray the ruling class as shallow and sordid, thereby bringing immense incomes to the creators and merchants of cheap fiction while "serious literature" is hard to sell. Mises had no problem with that himself. He was only explaining the phenomenon.


For myself, among the challenges in writing fiction is that I find reality more compelling than the stories in my head. Yet, I like to think that my success comes from the fact that even computer documentation tells a story. My goal is to draw the reader into a new world where they are an interactive player who is rewarded for solving puzzles and unraveling mysteries. Work done results in gold accumulated.

Unlike "summer reading" most of these books are slim, often novella length or not much beyond. In hard copy, they sell cheap, typically $10 to $20 depending on the work's length and the author's optimism. Among the many advantages of a book is that you can get it autographed. I bought five at this show and they are all signed.


Readers are members of a community. Anthropology and sociology offer contexts for understanding how communities exist, survive, and thrive. Humans long ago left behind the small band in which everyone did everything for themselves. Division of labor exists in the simplest tribes today. Civilization would be impossible without it. "Jerry Emanuelson's Mathematical Proof of Ricardo's Law of Association" used junior high algebra to show that if two people divide their work and specialize, they create more than they can working alone, even if one person does both tasks bettter than the other.


When you tell someone that you are a writer they often say that they would like to write, too. But of course they do not. It seems easy. That makes it hard to sell my work to people who think that they can write. Business analysts are the worst. At least programmers (devops) know that they cannot write and do not want to. It is why Cyrano de Bergerac's duel with Valvert brings me simulataneously to laughter and tears: "You say that I have a big nose. Is that the best that you can do?"

Ayn Rand and Star Trek
Firefly: Fact and Value Aboard Serenity
The Ferengi Rules of Commerce
Star Trek (not too Far) Beyond