Star Trek: (Not too Far) Beyond

It was all right as such things go. I know from numismatics that the coins we cherish today – Bust Half Dollar, Peace Dollar, Walking Liberty Half Dollar – were reviled in their own time. Shakespeare and Bach were lost and then re-discovered in the 19th century.  So, perhaps time will serve this movie well. For the present, Wikipedia quoted Richard Roeper of the Chicago Sun-Times (July 18, 2016): “[e]ven with its big-screen pyrotechnics and its feature-length running time, Star Trek Beyond plays like an extended version of one of the better episodes from the original series, and I mean that in the best possible way.” 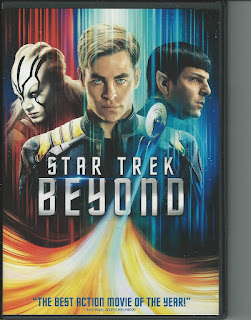 Like much television writing, this plot had problems.  To be fair, we watched it twice. Between times, I read Wikipedia and Memory Alpha to understand what was happening. Perhaps I am getting old, but a lot flashed by at warp speed the first time, and I missed some details. Nonetheless, the second viewing after all of the reading revealed unsolved problems with the plot.

The only surprise was that the movie ran 122 minutes. It felt like three hours. All of the elements of a Star Trek story were in place, but nothing more. We do not learn anything new about our virtual friends or their universe.  The star base Yorktown was visually compelling, but we have seen its like from Coruscant of Star Wars, if not Earth of The Jetsons.

Captain Kirk’s closet.  He has a rack of identical uniforms. I have two uniforms. It is hard to imagine how he gets dirty during his working day. And the ship must have some kind of laundry, even if replicators were not yet invented in this timeline.  I get the point: life is monotonous; even his wardrobe is boring. Still, he must have had work clothes, work-out clothes, and a formal.

Why did Dr. McCoy go into Chekov’s locker?  That seems like a gross violation of personal liberty, even on a military vessel. It is not clear that alcohol (or anything else like it) is forbidden on board. Presumably, of course, one cannot report for duty incapable of performing as required. But Saurian brandy and other references are known from the Original Series. In By Any Other Name, Scotty gets the Kelvan, Tomar, drunk. “What is it?” the alien asks.  “It’s green,” Scotty replies. For the Next Generation, we had a bartender mixing amusing concoctions.

Nietzschean Philosophy. Krall (formerly Captain Balthazar Edison of the Franklin) launched his vicious attack in defiance of the unity and peace of the Federation. Humanity needs the struggle of war to advance, he claims. So, he acquires a powerful bioweapon in order to destroy millions (perhaps billions) of people thereby giving the survivors something to live for. That twisted logic is familiar from 50 years of James Bond villains, but probably has roots in Jules Verne’s Captain Nemo and Robur the Conqueror.

Minions. Where does Krall get his crew from? Were these the other survivors of the Franklin? He throws them away easily enough. That callous disregard for his minions must have been evident to them decades earlier. If they agree with his philosophy, why have they not fractured into 50 warring kingdoms with hordes of battling robots, rather than being unified under Krall’s (questionable) leadership? (This is the same problem from Space Seed and the story of Noonian Singh Khan.) Why had they not reduced their numbers, as they sucked the life out of each other over 100 years.

Zombies/Vampires. These beings from the Franklin can only extend their lives by sucking the life force of other beings.  It seems like thin fare, as seldom as the nebula has been visited.  Krall and his minions must be constantly on the hunt.  Also, while Jaylah is clever enough to have survived, her origin is not clear. (I fell from the sky.) Neither is it clear where the other scavengers came from, or how they survive, again, given Krall’s powerful army of zombies and robots. (Perhaps they were living on bats and moths, the only animals on the planet, apparently.)

The Reputation of the Nebula. Given that it harbors an army of vampires or zombies, supported by a huge army of robots, the nebula should be infamous as a place to avoid.

Magellan Probes. The point above is underscored by the reference to the Magellan probes. The Federation has been exploring the nebula for some time. The mysterious disappearance of the Franklin must have been a warning, as would be the unsuccessful series of probes. The reference to the Magellan probes also contradicts Kirk’s warning that they are entering a nebula that will make communication with the Federation impossible.  The probes were expected to work.

Captain Edison’s Complaint.  Krall/Edison’s grudge against peace and quiet is reinforced in his own mind by his allegation that the Federation “abandoned” him. But he must have known that communication outside the nebula was difficult or impossible until he himself was able to “piggyback” Magellan probes to establish a read-only traffic from the Federation.

The Beastie Boys.  As annoying as that so-called music is, it is, nonetheless music with complex patterns. It is no worse than Klingon opera. Work as it did against the robots, it failed to affect Krall’s ship.
The Writing on the Wall.  Finding a single inscription on a wall in a cave, McCoy and Spock leap to the conclusion that the Abronath artifact originated from this planet (Altamid) because the writing is similar.  When I first was attracted to numismatics, it occurred to me that a time traveler to Pax Romana could freely spend Mercury dimes. Hopefully, no one today looking at one of them thinks that they came from ancient Rome. 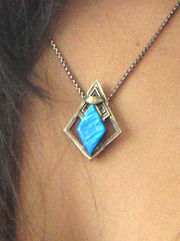 On the Up Side.  The stone in the necklace that Spock gave to Uhura was named “vokaya” by the founders of Memory Alpha,  Daniel C. Carlson and Harry Doddema. “Doddema thought of trinitite, a real radioactive material created by the Trinity atom bomb test that was used in jewelry before its effects were understood. Such radioactive materials would have been created on Vulcan in the nuclear wars before the Time of Awakening. Studying the Vulcan language, they settled on the name "Vokaya" as a contraction of Vokau-heya, meaning "remembrance stone" or "memory stone", as the Vulcans would use vokaya to remember how warlike they were.” (Memory Alpha here.)

Teaching Science with Science Fiction
Posted by Michael E. Marotta at 10:29 AM