Cleveland, Ohio, and the Gates of Argonath

"Two pairs of entrance pylons on both the west and east ends of the Hope Memorial Bridge (formerly the Lorain-Carnegie Bridge) have figural reliefs symbolizing the development of road transportation. These stylized 43-foot high pylons, carved of Berea sandstone, are well-preserved examples of Art Deco figures, all holding examples of road transportation." --
https://www.bluffton.edu/homepages/facstaff/sullivanm/ohio/cleveland/bridgepylons/hering.html 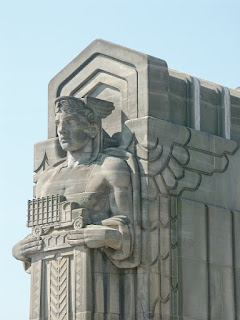 The Argonath, also known as the Gate of Kings or the Pillars of the Kings, was a landmark on the northern edge of Gondor. The Argonath consisted of two enormous rock pillars, carved in the likenesses of Isildur and Anárion facing to the north. Placed upon huge pedestals, each of the two figures held an axe in its right hand and its left hand rose in a gesture of defiance to the enemies of Gondor. The two statues stood upon either side of the River Anduin at the northern approach to Nen Hithoel. -- http://tolkiengateway.net/wiki/Argonath 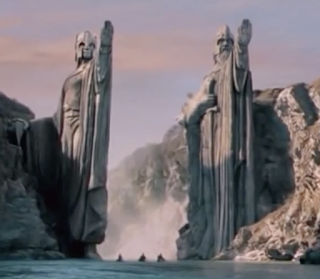 "The Argonath, also known as The Gates of Argonath or The Pillars of Kings, was a monument comprised of two enormous statues carved in the likenesses of Isildur and Anárion, standing upon either side of the River Anduin at the northern entrance to Nen Hithoel. It marked the northern border of Gondor, as nearby down south were previous outposts, Amon Hen and the Amon Lhaw.
The Argonath was originally constructed about TA 1340 at the order of Rómendacil II to mark the northern border of Gondor, although the realm was greatly diminished in size by the time the Fellowship of the Ring passed the monument on February 25, 3019. Each of the two figures was shown wearing a crown and a helm, with an axe in its right hand and its left hand raised in a gesture of defiance to the enemies of Gondor."  -- http://lotr.wikia.com/wiki/Argonath 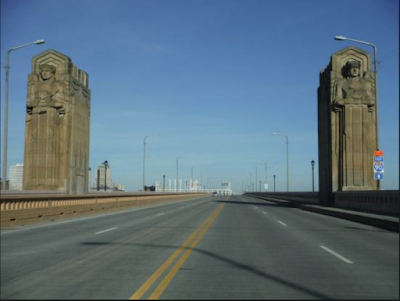 "Perhaps the most memorable features of the Lorain-Carnegie Bridge are the 43-foot tall “Guardians of Transportation” which line its sides. These four huge double-sided pylons, carved out of sandstone from nearby Berea, Ohio, represent technological advances made in transit, with each Guardian holding a different kind of vehicle in its massive hands. Frank Walker designed the pylons and Henry Hering did the actual sculpting with the help of a number of local stonecutters."
-- https://clevelandhistorical.org/items/show/73

"In the 1970s, Cuyahoga County Engineer Albert Porter wanted to tear down the pylons in order to add lanes to the bridge. He did not get his way. So, when the bridge reopened in 1983 after nearly three years of repairs, the Guardians of Transportation were still in place. The bridge was renamed at this time, becoming the Hope Memorial Bridge, in honor of actor Bob Hope and his family - English immigrants who came to Cleveland in 1908. William Henry Hope, Bob’s father, was a stonemason who worked on the construction of the Guardians in the 1930s."
-- https://clevelandhistorical.org/items/show/73 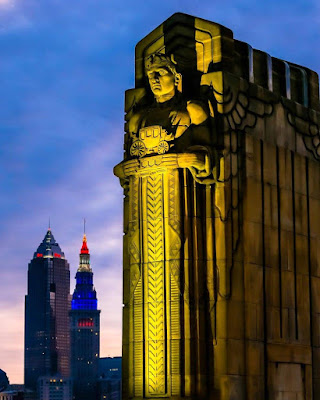 "Henry Hering is well known for his work as an architectural sculptor. Much of his work consists of allegorical figures done in the Beaux-Arts tradition, although a few of his later works, such as the detailing in Severance Hall and the Lorain-Carnegie Bridge in Cleveland, Ohio, were done in the Art Deco style. Hering's reputation as a sculptor decreased as International Modernism dispensed with architectural, figurative and allegorical work. As with many other such artists Hering's oeuvre is now being reexamined in a more positive light. In 1928 he was elected into the National Academy of Design as an Associate member and became a full Academician in 1937."
-- https://en.wikipedia.org/wiki/Henry_Hering 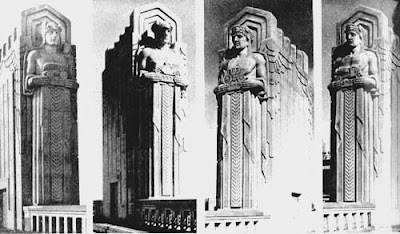 "Hering is further remembered in relation to the unfortunate crash of an American B-25 military airplane into New York City's Empire State Building on July 28, 1945. The largest sections of the plane remained lodged in the building, or fell directly to the streets below. However, one engine ripped from its wing and traveled some distance away, regrettably landing in Hering's top floor penthouse studio, located in a building near the crash. At the time, newspaper coverage of the accident reported that, although the artist was not in his studio at the time, about $75,000 worth of his work was destroyed." -- https://en.wikipedia.org/wiki/Henry_Hering

Superheroes Live in Cities
Mapping it Out: An Alternative Atlas of Contemporary Cartographics
The Wizard of Oz and the Anti-Intellectual Tradition
The Akkadian Roots of Modern Semitic Languages