I write this blog for myself. As a contract technical writer, I get paid to write what other people want. I enjoy it. That work is near the top of my Maslow Hierarchy as self-fulfillment. But it is still primarily for other people, work for hire. This is my own diary.

I do publicize some of the essays here. Even so, I only have seven followers. So, to have 178,133 pageviews in five years is interesting, if not laudable. Just under 100 times a day, someone else reads something here. But who reads what?

Sometimes, readers from Russia, China, or India have taken first place. Occasionally, other areas pop up in the standings. Usually, of course, most of the hits come from Americans. If I were not an American, that might not be true, but, of course, America dominates the Internet. 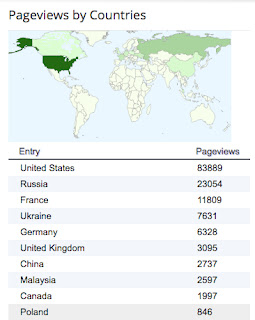 To me, the curious fact is that the most popular essay is "What (if Anything) Did Dorothy Learn?" which examines the penultimate scene of the 1939 film, The Wizard of Oz. Not in this blog, but available elsewhere, is an article that I wrote about the political, economic, and numismatic references in L. Frank Baum's classic fantasy. It appeared first in the Centinel of the Central States Numismatic Society, Vol. 58, no. 2, Summer 2010, p.58-61 as "The Wizard of Oz: Child's Tale or Numismatic Allegory?"  That issue is archived on the Newman Numismatic Portal here.

Generally, the articles here are about science and technology, numismatics, politics, and science fiction. But those easy rubrics mask what I consider to be more interesting threads.

Nerds, geniuses, and gifteds make it possible for the rest of us to survive. When the great glaciers were melting, we might have had one genius every three or four generations. Now, with 6 billion people on Earth, we have more of them all the time. And I am glad that we do.

Recently, I started writing about the military. On November 22, 2014, I volunteered to join the Texas State Guard. I came to that opportunity by way of contract technical writing. I was on assignment with the Texas Division of Emergency Management within the Texas Department of Public Safety. There, I found out about the work of the TXSG, which evacuates people from danger, manages shelters, carries out ground search, and other duties. My next assignment was for the office of the Executive Director of the Texas Military Department. So, it was easy to volunteer.  And I am learning a lot about leadership which is better than management for everyone in the business world. 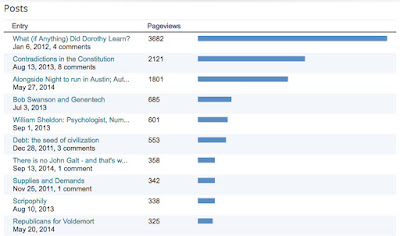 Numismatics is the art and science that studies the forms and uses of money. Numismatics opens the door to history, language, fine art, culture, commerce, and, of course, economics. It is a large lacuna that the great economists were not themselves "coin collectors." (A modern exception is George Selgin, author of Good Money: Birmingham Button Makers, the Royal Mint, and the Beginnings of Modern Coinage.)  Money has many forms and functions, and numismatics is about much more than coins.

I love cities. I admit that a week in New York is about two days too many, but having lived in two small towns and two villages (in America), a city of one or two million is just about right for me. Austin is perfect. My choices aside, megacities are the jewels of planet Earth.

When I was in graduate school (2009-2010), I had a criminology class in Miscarriages of Justice that focused on misconduct in police laboratories and junk science in the courtroom. From there, I expanded my reading into laboratory misconduct and academic fraud. The two areas are inter-connected. They each can be extended to include electoral voting fraud.

But I write about whatever interests me from astronomy to firefighters. Apparently, other people find some of it interesting, also, and I am glad that they do.