Austin runs on cerebral energy.  Dell, Inc., is headquartered here, of course, but even South by Southwest gives top billing to mathematician and cybernetic futurist Stephen Wolfram. So, as freely as technology start-ups bring beer to user group meetings, we love coffee more.

"Tuca left the Vale da Grama at a young age for Sao Paulo, pursuing a career in architecture and never imaging that farming would be in her future. After her grandfather passed away, the family considered renting out the farm, exiting the business they had been in since 1907. However, in 2010 Tuca returned to the Vale da Grama and, along with family business partner Rodrigo Fernandes, took over the management of Santa Alina. Their mission was two-fold, to increase the production of high quality micro-lots and to increase the living standard of those living and working on the farm."  http://www.casabrasilcoffees.com/grower/santa-alina/ 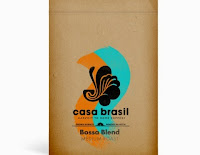 The Casa Brasil website explains safra zero, or zero harvest.  “In the zero harvest system a producer prunes the branches of a coffee tree completely back to the trunk. After a year of regeneration with no yield, the tree will then produce larger amounts of coffee the following year. The process can then be repeated.”

If you shop directly with Casa Brasil, you can get blends or single-source (currently from the Fazenda Ambiental Fortaleza and Fazenda Recreio estates).  In all, they offer seven different roasts, including a Swiss water process decaf.