The Sokal Affair was an important event in 20th century intellectual history. Nominally about the social basis of knowledge, the truths it revealed impact the foundations of our society.

In 1996, physicist Alan Sokal submitted an article to Social Text magazine.  The work was a hoax, a pastiche of doubletalk and nonsense supported by footnotes. Sokal was studious and diligent, only that he did not mean a word of it. His goal was to demonstrate that academic scholarship long ago slid and slipped into meaninglessness.  On the day that his essay appeared in Social Text, his revelation also was published by Lingua Franca. 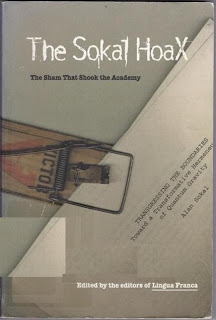 “While my method was satirical, my motivation was utterly serious. What concerns me is the proliferation, not just of nonsense and sloppy thinking per se, but of a particular kind of nonsense and sloppy thinking: one that denies the existence of objective realities or (when challenged) admits their existence but downplays their practical relevance.  At its best, a journal like Social Text raises important issues that no scientist should ignore – questions for example about how corporate and government funding influence scientific work. Unfortunately, epistemic relativism does little to further the discussion of such matters.” -- Alan Sokal, “Revelation: A Physicist Experiments with Cultural Studies,” Lingua Franca, May-June 1996.

Among the many ridiculous statements in the original essay was this:

“… the π of Euclid and the G of Newton, formerly thought to be constant and universal, are now perceived in their ineluctable historicity; and the putative observer becomes fatally de-centered, disconnected from any epistemic link to a space-time point that can no longer be defined by geometry alone.” Alan Sokal, “Transgressing the Bounderies: Toward a Transformative Hermeneutics of Quantum Gravity,” Social Text, Spring-Summer 1996.

It would be amusing, but for the fact that people actually do harm and even kill each other,  and in most societies do come to trial for it.  In 2009, working toward a master of arts in social science, I had a class in Advanced Criminology Theory.  One of our textbooks was The Essential Criminology Reader, edited by Stuart M. Henry and Mark M. Lanier (Westview, 2006). My degree is from where Stuart M. Henry was an associate professor of criminology from 1987 to 1998.

My classmates could not wait to jump on the subjectivist bandwagon.  They took turns agreeing that right and wrong are only social constructs.  I spoke up.  One of my peers worked for the sheriff’s department.  She was incensed that the crimes of Bernie Madoff resulted in the loss of funding for a local charity to help the mentally disabled homeless.  I had to insist: “If right and wrong are only a social narrative, then how could Bernie Madoff have committed any crime as his so-called victims were in fact other corporate fund managers at his own level? Many of them profited, some like the B'Nai Brith for thirty years.”  Silence.  We learned the mathematical babble of Gilles Deleuze who said that crime is a strange attractor becoming a torus.  That is not helpful to a jury.

The ins and outs of the Sokal Affair are important for everyone who cares about the apparent decline of the modern world. Listen carefully to President Barack Obama.  He was educated in the postmodernist method.  Conservatives claim that he is a Muslim or a Marxist, or both at once.  If he were either, he would not speak as he does.

“Ayn Rand is one of those things that a lot of us, when we were 17 or 18 and feeling misunderstood, we'd pick up. Then, as we get older, we realize that a world in which we're only thinking about ourselves and not thinking about anybody else, in which we're considering the entire project of developing ourselves as more important than our relationships to other people and making sure that everybody else has opportunity – that that's a pretty narrow vision.” (Obama and the Road Ahead: The Rolling Stone Interview,” By Douglas Brinkley; November 8, 2012.)

The key word is “project.” In the newspeak of postmodernism, the Enlightenment was a project. (It is on a global capitalist “trajectory”.)  Postmodernists “give space to voice” or complain that others deny it.  (See, for example, Feminist Political Ecology: Global Issues and Local Experience, edited by Dianne Rocheleau, Barbara Thomas-Slayter, and Esther Wangar. This is merely one out of many.)

The President is not the bad guy here.  He is just a man of his time, educated in a tradition, who thinks as he does.  A hundred others could have taken his place in the White House and in history.  The point is that postmodernism permeates our culture. This goes beyond the mere subjectivity of experience.  Even if I identify a car as “teal” while my wife calls it “aquamarine” the car still exists, as do absolute right and wrong.
Previously on Necessary Facts

Teaching Science via Science Fiction
Eli the Iceman: Science and Technology
Monsters from the Id: Science as Mankind's Last Hope
Great Scientific Experiments
She's Such a Geek: Women Write about Science and other Nerdy Stuff
TVs "Big Bang Theory" and The Big Whimper of Modern Philosophy
Posted by Michael E. Marotta at 5:59 PM