Having retired from the Texas State Guard, the time came to change the messages on my car.

The State of Texas grants a long list of specialty plates for those who have served. Federal military veterans from all branches can display their highest honors with Bronze Star and Purple Heart among many others. Disabled veterans have their own serial numbers (DV-) as well as the message.

I designed and paid for the central bumper sticker:
ANOTHER DAY IN PARADISE
LIVING THE DREAM
SERVING TEXAS
I had a hundred run off and then distributed some to my buddies in the TXSG, donating the bulk of the inventory to our "Country Store" retail operation run by the T-4 (Logistics) shop.

The Barlett for President sticker came from a West Wing fan site, of course. I wish that I lived in that universe. We were enthralled by the characters who were working the most important jobs of their lives. Even most of the Republicans were admirable. 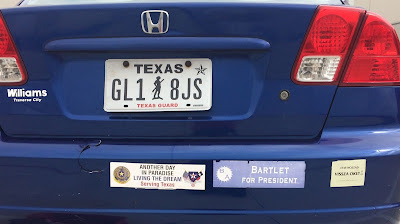 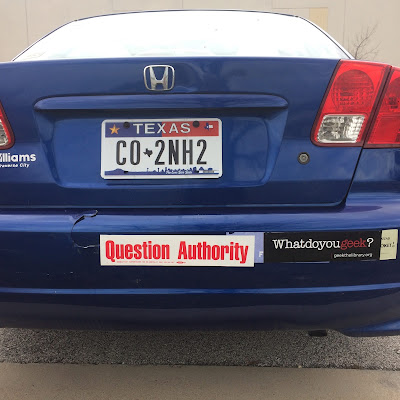 My goal here is to change the messages periodically. In the waiting file, I have "Who is John Galt" and " I (heart) Capitalism" among others.

The new license plate is a chemical formula for urea. It can be NH2-CO-NH2 or CO(NH2)2 or other representations. In 1828, urea was the first organic compound made in a laboratory entirely from inorganic components. (See Wikipedia here.) Among other achievements, its synthesis supposedly disproved the theory of vitalism. Vitalism posits that "life" is an ineffable and irreducible quality. I am not sure that I accept that, but I am sure that organic compounds can be found in stellar nebulae. I do not know how strings of hydrocarbons become living organisms. The empirical evidence is nonetheless unarguable.

To the right of Question Authority is "What do you geek?" It was a campaign from the City of Austin Public Library last year to promote a wide range of interesting and curious passions from a diverse array of representational patrons. (They were real people. I am just not sure that they were truly library patrons rather than professional models.) It now eclipses the little square which read "Bring them Back Alive" (a promotion of the American Automobile Association) though in Hungarian. The AAA gave them out in many languages.