Not only was Star Wars: The Force Continues a disappointment, I spent two weeks slogging through The Zenith Angle by Bruce Sterling.

Previous works by Bruce Sterling shifted my paradigms. I read Islands in the Net in the early nineties while I was working for Kawasaki Robotics, so I really identified with the global corporate solidarity. The heroine was unique to the story. A lot happened to her, and she persevered through it all. Sterling created a colorful, complex mosaic of life in the early 21st century. I looked forward to it, and I enjoy living it now. He got most of it pretty right. Africa is still a problem, but showing hope. For the vagrant nationalist submarine, we have ISIS. 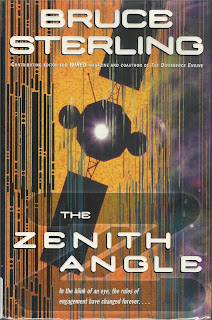 Schizmatrix painted a different solar system future. With Earth reduced by nuclear war, the few thousands who were off-planet, in space, on the Moon, continue as best they can. They do well. The characters were memorable individuals. I took away a couple of philosophical lessons about human action in society.

Revolution is for the young. But their glorious new dawn actually blinds them to the emerging reality that is better than they expected.  The girl who sacrificed herself in an act of political desperation was forgotten. And she missed out on everything that everyone else enjoyed. Aristotle said that tradition is stronger than law and it seemed sensible to me that a single spaceship with a small crew could claim the sovereignty belonging to a nation.  I fell in love with Intersolar Kabuki. Corporations are individuals. Creating them is easy; and they live without their founders, as children do their parents.

Difference Engine, Sterling’s collaboration with William Gibson, created a believable alternate past that has become steampunk in the culture of science fiction fandom

Just past half way through The Zenith Angle, I had to go back and start over. I lost track of the action because there was none. The main characters were not memorable. Sterling wrote the story in the heat of the 9/11 attacks. The world of 2004 looks much different now. I was amused at his reference to “Web logs” as we called them briefly. Like the cyberpunk world of today viewed from 1985, nothing ages as poorly as futurism.

I never figured out who the Dot Commie was. I never understood the purpose of Jeb. Putting Tony and the hero, Dr. Derek Vandeveer, inside an experimental, remote controlled jet was folly: no one would ever do that. Tony’s treason took me completely by surprise. Van’s assault on Tony’s sales pitch inside the observatory was also ludicrous. It is one thing to hide under a table. It is another to move around, and not be seen by a dozen people, half of whom are supposed to be intelligence agents for India and China. Discovering that Nobel laureate James Cobb was a fiction was a double disappointment. He would have been really cool in real life. Worse, was the invention in the first place: you can no more make up a Nobel laureate than you can invent a different capital city for Ohio.

Star Wars was our first date, October 31, 1977. It was part of the culture of our home as a family. It was not the only aspect. We had other interests, influences, and expressions. But it was there. And we followed the story in the theaters. Our daughter had the Marvel comics. ("I don't know who you are, or where you came from, but from now on, you will do exactly as I say!") Proofreading for Bantam-Doubleday, Laurel worked on a book about the mythology of Star Wars, Joseph Campbell, and all that.  So, we went to see The Force Continues for our wedding anniversary. “What did you think?” she asked. “I am pretty sure that I saw this already,” I replied. She agreed.

Talking about it at work with another fan, the story seemed to deviate from the accepted fanfic/profic arc. Han and Leia have twins, a boy and a girl. Skywalker has a child, a daughter as I recall. So, who is Rey? The force is strong within her. The Lucasfilm trailer even hints at the family connection. How did she get left behind by either her Princess General mother or else by her Last of the Jedi father? We can only hope that another movie will answer that, but I will not call that a new hope – and I will not be in the theater to see it.