According to most geologists, plate tectonics explains the major features of Earth’s surface. Continental land masses floating on the magma mantel crash into each other over hundreds of millions of years. This forms mountains, and therefore valleys, of course. The mountains wear down. Their rocks are ground fine, mixed with vegetation and animal remains, and become topsoil. Several times, oscillations of glaciers moved forward and retreated, carving valleys, forming rivers and lakes, and then melting. In their reversals, they left behind huge boulders and other “exotic” materials.  Geologist Anita Harris used to believe that, also. Over the course of her career, she came to doubt that the story is so simple.  Plate tectonics has a place. It does explain some facts. It does not explain everything.

Like medieval astronomers adding epicycles to fit their ever-better measurements with astrolabes, the modern geologists posit smaller, localized land masses that bump into continents in order to explain mountain ranges and other features that would contradict plate tectonics. 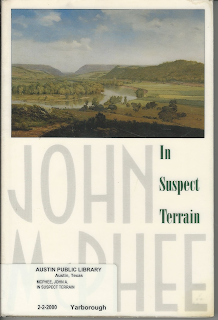 I confess that my geology is weak. I do not have it in my head. I rely on websites such as this one from the University of California at Berkeley to remind me which came first, the Silurian, Ordovician, or Cambrian.

It did not detract from the book. I read through almost all of it with only a few stops.  The bigger picture is easy to perceive.

John McPhee’s biography of Anita G. Harris is also a geological travelogue through the eastern United States. Harris was born in Brooklyn. The sands of Coney Island have garnet in them. McPhee and Harris travel through the Alleghenies, down into Ohio, across into Illinois.  The book opens with an eastward journey and then treks back.  That meandering narrative has islands of detail about  Harris’s career, and her marriages to other geologists.

Like Irons in the Fire, about modern cattle rustlers, and The Curve of Binding Energy, a biography of John Wheeler, In Suspect Terrain immerses the reader in McPhee’s experience of a new subject.  He is an able student, and an engaging teacher.

Geology is not easy. One of my criminal justice instructors said that cops at a crime scene do not spend enough time with dirt and glass.  So, I took a geology class. It was a “local lab” course with a lot of outside work in our own neighborhood. For the semester project, we went to a quarry and assembled collections of fossils.  (Someone gave me a trilobite. I never found one on my own.)  I thought that I would learn the local rocks and minerals like the stars in constellations. Nope. Geologists keep tons of rocks labeled in cases because of the enormous inventory of types and kinds.  You can learn the easy ones: igneous, metamorphic, sedimentary… obsidian, marble, limestone, granite, flint, … After that, you have to love categorizing and cataloguing. It is as bad as biology. Contrary to physics and mathematics, geology is a study that rewards maturity, rather than intuition. Anita Harris’s woe is the armies of young geologists lured by the Siren song of plate tectonics.

PREVIOUSLY ON NECESSARY FACTS
The Map that Changed the World
Circumference
Anthropocene: Bad Name for a Good Thing
From Texas to the Moon with John Leonard Riddell