Since the very first Red Book in 1946, Whitman Publishing has supported the hobby and science of numismatics with the annual “Red Book” and “Blue Book” price guides.  Over the past 20 years, their renewed effort continues to deliver high-quality, authoritative books, lavishly illustrated, at affordable prices.   Whether your interest is in American coinage, North American paper money, ancient coins, merchant tokens, or medals, Whitman has a reference book that will illuminate the known facts and excite your curiosity for what remains to be discovered.

The Red Book (A Guide Book of United States Coins by R. S. Yeoman and Kenneth Bressett) is the standard reference for U.S. coinage, including federal, colonial, pioneer, merchant, and other issues.  It is centered on U.S. Federal coinage from 1794 to the present.  The book presents physical dimensions, grading standards, approximate valuations, history, and a bibliography of authorities for each issue.  Most people have never seen a half cent, 2-cent, 0r 3-cent coin.  The “trimes” were struck on both silver and copper-nickel.  The $4 gold “Stella” was a pattern piece intended to induce Congress to join the Latin Monetary Union of France, Switzerland and 20 other nations.  It was not successful.  The 20-cent silver was also intended to bring the U.S. into the international arena. It also failed.

If you inherit a trove of coins from an old relative, what are they worth?  The Red Book will tell you, approximately.  The prices here are the best guess for the retail price that a collector would pay.  A dealer will pay less, of course.  For that, the companion Blue Book of wholesale sell prices is somewhat more accurate.  But the Blue Book lacks all the history and narrative.  So, we use the Red Book and figure that dealers will pay 40%... 50%... or 60% less…  Except, of course, for the coins that even they cannot easily get, such as the 1877 Indianhead Cent or 1848 CAL $2.50 quarter Eagle gold.
The Official Red Book: A Guide Book of United States Coins (Professional Edition) by R. S. Yeoman; Kenneth Bressett, series editor; Jeff Garrett, valuations editor; Q. David Bowers, research editor. (Whitman Publishing LLC, 2009.)
Criticisms of the “Professional Edition of the Red Book” appeared on the numismatic discussion boards and email lists as soon as it was announced. The new, larger format (full 8½ x 11) was a surprise. Suspicion that this “inside” information was denied to collectors who bought the “ordinary” Red Book had a reverse side: Is this all of the professional information, or are they holding back?  Why did they create two Red Books, instead of just incorporating all of the information from both into one book?  Finally, many collectors wanted to know, “Is it worth buying?”
To take the last point first, the cover price is $29.95, which is a small investment for the information in this 383-page compendium of auction summaries, historical background, type and variety details, high resolution illustrations, and market insights.
As for the arrays of information, the easiest view is that the Professional Edition presents details on only the high-value coins in each series. For Morgan Dollars, only Mint State grades are tabulated, while for early Large Cents to 1814, VF grades are included. Although V-Nickels and Buffalo Nickels are priced EF-40 and above, data for Jefferson Nickels begins with MS-64 Full Steps. Generally, grading stops at MS-65 and Proof-65. Populations and markets become too thin. However, for Roosevelt Dimes up to 1964 grades run MS-63, 65, 66, 67, and 68, whereas after 1965, only the four highest grades are priced. In short, the editors have taken great care to present the information actually needed by professionals when faced with a certain coin of a certain type, date, and mint. 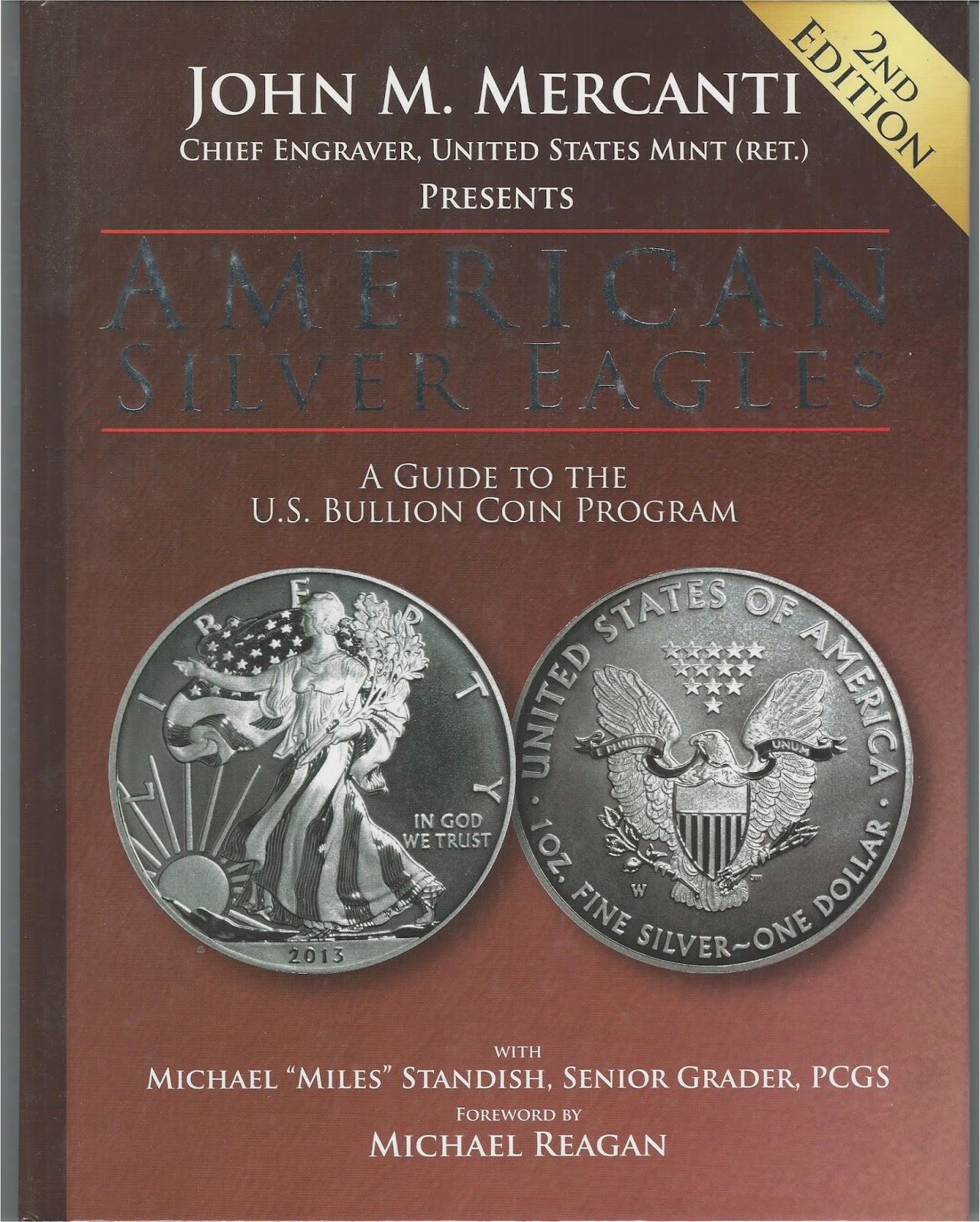 Personally, I never gave them much thought... Then I read a collectors’ discussion board thread on “Counterfeit Eagles.” Moreover, they are not merely bullion, but collectibles in their own right, with long histories, and varieties. Note, however, that as true moderns (“post moderns”?), their characteristics are not those of the classic coins. “First Strike’ certification may remain as arguable as any other grading point but the markets seem to continue supporting them. “Burnished” coins join Regular and Proof designations. Is a Burnished MS-70 worth more than a Proof 70? Apparently so.

PCGS ranked this as the finest collection of Morgan Dollars. But this is not a VAM book. Each of these wonderful coins is just an example of an issue - but the highest known grade, including those that are Deep Mirror Prooflike (DMPL). Looking at the numbers on each page, it is astounding how rare certified coins are. 5 million... 8 million... 11 million struck, but only a few thousand certified; and of those only a few hundred are of the highest grades. 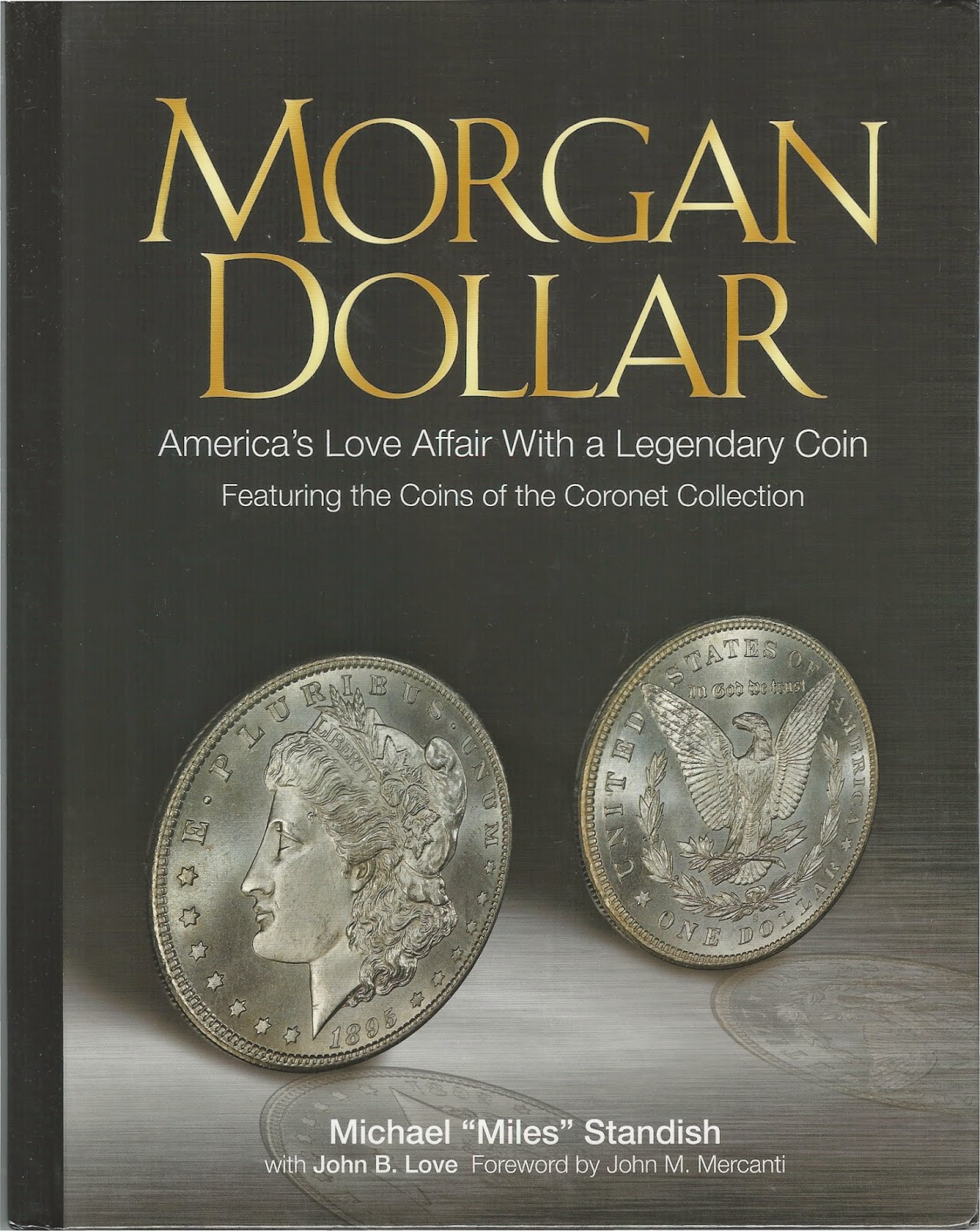 Of course, there is more to numismatics than grading. This book provides an insightful - sometimes quirky - history of the Morgan Dollar, placing it in its cultural context. Knowledgeable collectors will identify the goddess on the obverse as Anna Williams of Philadelphia. Perhaps not, says Standish, citing a Coin World article from 2002 that revealed a letter from George Morgan denying that any one model served for Miss Liberty.

This book also delivers an in-depth analysis of pricing as cited in the Red Book.

Carson City Morgan Dollars Featuriing Coins Of The GSA Hoard by Adam Crum, Selby Unger and Jeff Oxman. Now 130 + v pages, still $24.95, with new photographs from historical archives, "revisions from ongoing research" and the usual tables of reliable price estimates. The GSA Hoard made headlines in October 1972. The release of 2.9 million Carson City Dollars drastically changed the markets as rarities became common. They continue to live a life of their own, still collectible as GSA Hoard Dollars.  Carson City Morgan Dollars are one of the many niches that reward detailed study and careful collecting. The new handbook from Whitman is a nice introduction to a fascinating array of coins and people. As the price of silver broke away from mint parity in the early 1960s, collectors exhibited a “feeding frenzy” for silver dollars. In March 1964, the US Treasury halted the exchange of silver dollars. The Congressional Joint Committee on Coinage called on the Government Services Administration to operate a mail bid sale for the remainder of the inventory, about 10% of which were discovered to be from Carson City. The GSA created an “A Team” of experts to grade the coins for sale, including John J. Pittman, Amon Carter and Margo Russell. 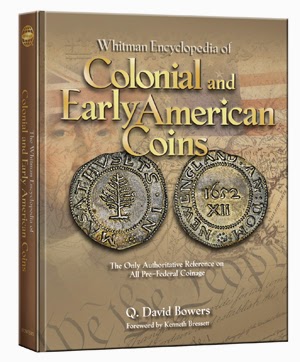 Q. David Bowers has outdone himself. Far more than yet another interesting book about fascinating highlights in numismatics, Colonial and Early American Coins is a new standard reference for the new century. That is highly appropriate because as divisive as our politics can be – Howard Fast to Ayn Rand; Al Franken to Ann Coulter – perhaps no period of American history collects liberals and conservatives, paleos and neos, traditionalists and libertarians, as does the colonial and early federal. Proof of that is the fact that the popular edition of this book is sold out. (The premium binding is still available as of this writing, July 2009.)
“Colonials have always played to a fairly lively market, but a small one in comparison to federal coins,” Bowers replied to me via email (04/30/2009). “I am not aware of any time in American numismatic history, from the 1850s when collecting became popular, down to the present day, that, for example, a basic 1652-dated Pine Tree shilling in Fine grade has declined in value. A charting at ten-year intervals will show an increase. The reason for this is that Colonial coins have little if any interest to “pure” investors or speculators. Instead, the market has been completely comprised of buyers who are interested in Colonial coins and their history, and who cherish their ownership.”
Like other works in the Whitman Encyclopedia series of books, this volume also adheres to a standardized format that meets the most important needs of the broadest set of collectors. Each entry has a new Whitman number along with the variety numbers from the previous standard references, Ryder, Maris, etc., and an estimation of rarity. Most of the entries carry a vector of prices for grades Good through Mint State. (Others are seen too seldom at auction.)
In addition to Bowers’ efforts, Ken Bressett was tapped for a Forward and the valuations were reviewed by Lawrence Stack. Introductory chapters on colonial economics and minting methods provide a contextual foundation. The third chapter delivers a historical overview of the collecting of these coins and tokens, including famous sales. Special attribution guides for Connecticut, New Jersey and Fugio issues bring the fruits of 150 years of numismatic study to today’s collectors. Harlan Berk’s 100 Greatest Ancient Coins.   “Knowledge is king,” said Harlan J. Berk, asking rhetorically, “Do you have a Hannibal portrait versus just another Melqart?”  For Berk, learning is a lifelong process, and writing 100 Greatest Ancient Coins exemplified that. “Syracuse was founded on a small island and then moved to Sicily. The four dolphins [on their large silver coins] represent the sea. I had not known that. If I did not, then others probably did not as well.”
To validate the book, Berk relied on his extensive network of personal friends and professional contacts in numismatics. Among them were Alan Walker, Ute Wartenberg Kagan, Curtis Clay and Phil Davis.
The tally of one hundred coins came from a poll the world’s hundred best numismatists.  “I chose the group,” Berk said. “I gave [Whitman] the names of a hundred or so academics, collectors, and dealers from around the world.” Each person in this group submitted their own list of a hundred or so aesthetically superior or historically important issues. All of the polling was requested, accepted and compiled via emails. Perhaps not surprising in an antiquarian, Berk himself is not an engrained user of electronic media. His own preference would have been for paper and postage. Nonetheless, he remains satisfied with the final inventory. This same group provided the experts who reviewed the essays.