Watson’s Double Helix: Doing Science and Writing About It

The Double Helix (1968) is James D. Watson’s very personal account of how he and Francis Crick worked out the structure of DNA through 1951 and 1952.  The reading is an easy 141 pages.  But depth is here, also.  The story is about scientists, their social spheres, and their conflicts, and (ultimately) their collaborations.  This is also a chronological tour through some of the mind of James D. Watson.  Proof demands evidence explained by consistent reasoning. Getting there is intuitive, insightful, and contrary. 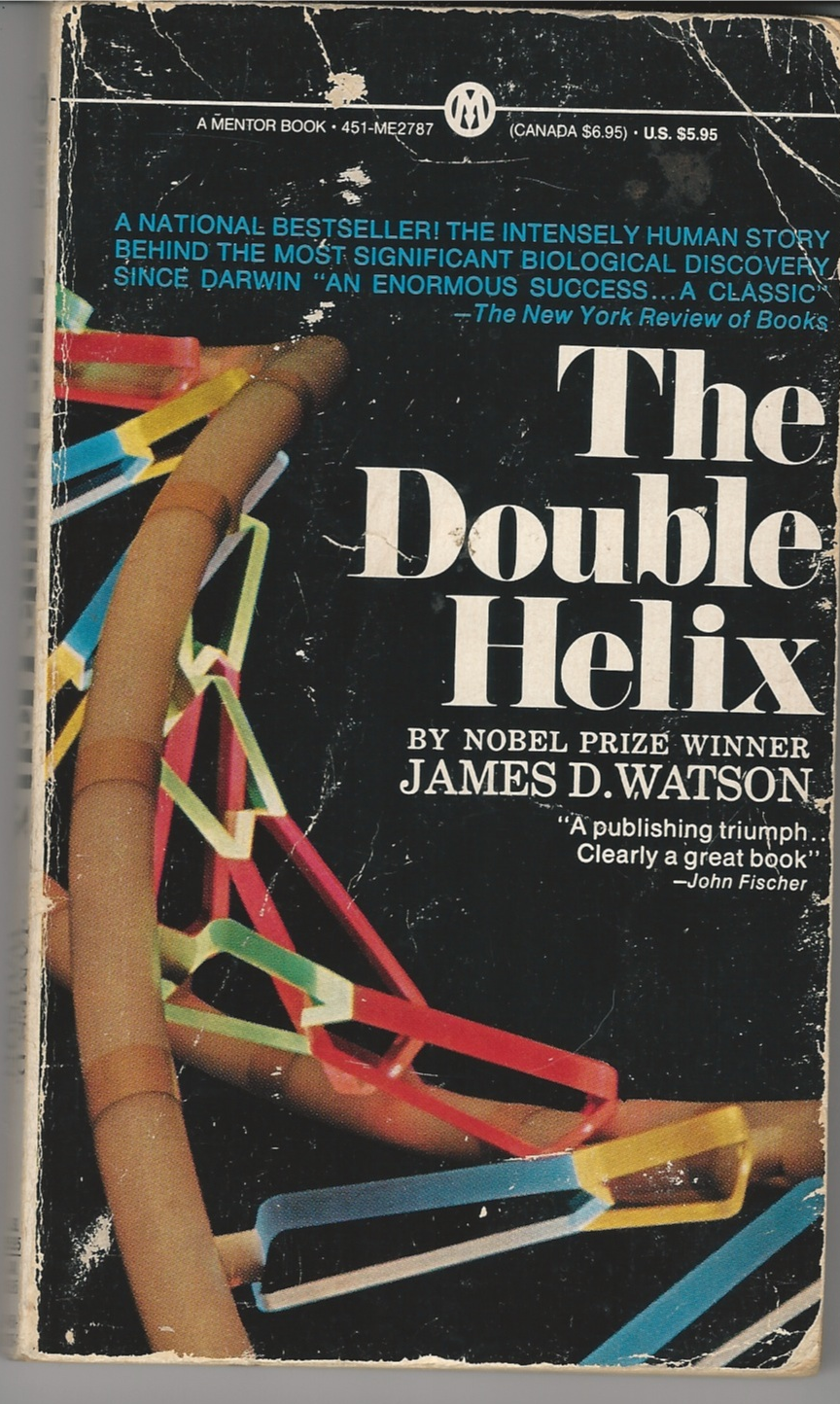 Watson does not explain the technical terms.  Mostly, it does not matter if you do not know the formulas for adenine, cytosine, guanine, and thymine.  (I do not. The book has pictures.) However, neither does he do more than drop the terms “keto” and “enol.”  (You can look them up. I have not.)  The narrative moves forward nonetheless.

More than the frustrating work of discovery, this story reveals much about how the culture of academic science perceived itself in the middle of the 20th century.  Watson’s telling is personally unkind to Sir Lawrence Bragg.  Bragg ordered his doctoral candidate, Crick, to abandon the pursuit for DNA. Says Watson: “ … we refrained from publicly questioning Bragg’s decision. An open outcry would reveal that our professor was completely in the dark about what the initials DNA stood for. There was no reason to believe that he gave it one hundredth the importance of the structure of metals, for which he took great delight in making soap-bubble models. Nothing then gave Sir Lawrence more pleasure than showing his ingenious motion-picture film of how soap bubbles bump each other.” (page 69)  Yet, Bragg wrote the Foreword. That speaks to the culture of science.

Their conflict with Rosalind Franklin is now a legend.  In closing the history, Watson allows that her barbed shell was a necessary defense in a society that held her sex against her.  Yet, Watson also admits that she stood on good science.  She refused to accept the helix until her own x-ray crystallography validated it, even though a single snapshot from that library inspired Crick and Watson to seek the spiral structure.  When the cards were on the table, Franklin agreed, plainly, flatly, honestly.  Ironically perhaps, at that moment, the structure of DNA had nothing to do with sex.

“Much of the talk about the three-dimensional structure of proteins and nucleic acids was hot air. … It made no sense to learn complicated mathematical methods in order to follow baloney.” (page 27).

Just as Sir Lawrence Bragg denied the value in Francis Crick’s independent path, Watson was fired by the supporters of his post-doctoral work.  His position at Cambridge (where he was not supposed to be in the first place) was cancelled and he was offered nine months (not a year) in the States.  Often attributed to Buddha, the fact that a prophet is not appreciated in his homeland is correctly cited to Jesus.  To the betterment of all, the culture of science is different than that of religion.  The worst they can do to you is to withhold your stipend.  In fact, Watson’s colleagues and friends at King’s College in London, Max Perutz and John Kendrew, assured him that they could find some money if he chose to remain in England.  That help turned out not to be necessary, though Watson continued his work at Cambridge.

He fit in well, there.  The sense of fair play that defined science then was important to him.  Crick and Watson worried about invading the research spaces of others who also sought the structure of DNA.  Topmost of them was Linus Pauling, already holding a Nobel Prize, and clearly capable of more achievements at that level.  When a published paper showed that Pauling was not just wrong, but had blundered, Crick and Watson knew that they had about six weeks to finish their work because Pauling could not be bested twice.

(Jeff Goldblum played John Watson in a television production of the story, “The Race for the Double Helix” Horizon season 23 episode 16, September 14, 1987.)