Dover Books specializes in the reproduction of classic works whose copyrights have expired.  This translation by Henry Crew and Alfonso de Silvio from 1914 was based on a rendition into modern Italian by Antonio Favoro. That work was part of the National Edition of Galileo’s compiled works published in 1913. It was a time of rising nationalism that would bring a worldwide war and fascism. However, Galileo’s work belongs to anyone who seeks the truth. 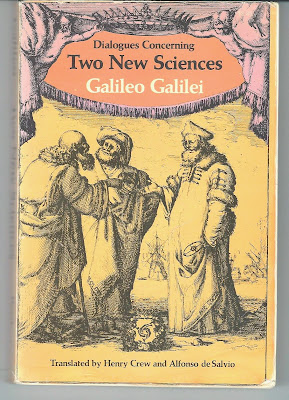 The Two Sciences here are what we now call “Statics” and “Dynamics” in freshman engineering curricula.  He also discusses problems from modern engineering college textbooks in strength of materials – and he gets a few things wrong, but that does not detract from the overall presentation.

Missing from Dialogues Concerning Two New Sciences is any mention of the Leaning Tower of Pisa.  Nonetheless, many times throughout, Galileo does refer to experiments with falling bodies. With extreme patience, he teased out the truth.  Galileo considered balls rolling down inclined planes and pendula of different arcs with bobs of different weights. His work foreshadowed Rayleigh on aerodynamics, but Galileo had no quantitative answers for his questions about air resistance; he knew nothing about the relationships among viscosity, cross section, and velocity. That would come 250 years later. Yet, he knew the variables…. And he knew much else.

Dialogues Concerning Two Sciences is one of those books that we all “know” but never read.  With over an hour on public transportation every morning and another plus a quarter or half at night, I had the time to read this.  I recommend it highly to anyone who wants to discover science for themselves, rather than taking someone else’s word for it.

Again, in this Galileo makes no mention of the Leaning Tower of Pisa.   But he does argue at length about the fact that two bodies of different weight fall with just about the same final velocity. Newton admitted to standing on the shoulders of giants.  Galileo depended on the “mean proportion” that was developed by the Oxford Calculators of the 13th century.  It is sadly very easy to posit that if Galileo had worked in the Middle Ages instead of the Counter-Reformation and wars of religion, his labors would have been embraced by the Church that opposed him in his own time.

Galileo also offers complex geometric proofs that I had to read past to get through. Even though algebra was over 300 years old by the time he wrote, like Isaac Newton (who was born the year that Galileo died), he proved his points with geometry.  We no longer learn it.  Yes, we have a year in high school; but even Richard Feynman had to admit defeat because he could not retrace Newton’s steps.  We are geometrically illiterate.  Still, it is obvious that Galileo was setting the foundation for his later demonstrations.  Deepest and chief among them are previews of what we call “calculus.”  Galileo showed that the instantaneous is an expression of the infinite.