Stand Up and Be Counted

Electronic voting makes election fraud even easier. Here in Travis County, no audit trail exists. The process of voting leaves no physical traces.  Moreover, no "red team" or "capture the flag" tests have been conducted. Instead, county clerk Dana DeBeauvoir repeatedly insists that adhering to good specifications removes the need for security tests. This is a logical outcome of the secret ballot. The secret ballot is called the "Australian ballot" because Australia was settled by criminals who did not trust each other.  That can be a bedrock foundation for social structures of laissez faire and laissez passer individualism. But in America, it is different. When you know that your rights will be respected by your neighbors, you can voice an unpopular opinion. 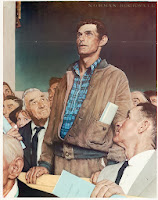 Massachusetts still has open town meetings.  And they are serious about it.

Selected Case Law
District Attorney for the Northern District v. Wayland School Committee, 455 Mass. 561 (2009). "Prior to conducting an open meeting, the school committee commenced a private e-mail exchange in order to deliberate the superintendent's professional competence. This violated the letter and spirit of the open meeting law. Governmental bodies may not circumvent the requirements of the open meeting law by conducting deliberations via private messages, whether electronically, in person, over the telephone, or in any other form." -- http://www.lawlib.state.ma.us/subject/about/openmeeting.html

An open vote is also easier to audit because everyone present can see the tally.  Of course, that works best in a village of a few thousand where a few hundred show up and a few dozen actually lead the process.  With about 700,000 people in the average Congressional district, open voting would be held in stadiums. But that is workable, given some new social norms.  Certainly, for local matters, every community has several venues that can serve a few hundred people.

If the concept were extended to juries, they would be held liable for wrongful convictions. The history of innocent people released from prison by DNA evidence suggests that right now about 80,000 innocent people are incarcerated.  For most crimes, DNA is not an issue.  Williamson County, Texas, prosecutor Ken Anderson was given ten days in jail, fined $500, and agreed to resign from the bar, for his wrongful conviction of Michael Morton, charged with killing his wife 25 years ago. (KVUE News here.) Back then, Anderson stood before the jury, with tears running down his face in grief for the victim, though he knew that he had been withholding exculpatory evidence. Of course, the jury bought it, also, allowing themselves to be swayed despite a lack of any physical evidence or eye-witness testimony.  As the innocent man served 25 years in prison, it seems fitting that the jury should be awarded the same consequences.  We know from the basics of criminology that very few perpetrators suddenly commit a causeless heinous act. While we all make mistakes, the fact is that for about 20% of us, crime is a lifestyle.  When considering the prosecutor's actions, it makes sense to review all of his cases and investigate his lifetime career for hidden crimes.