It is not surprising that we share 98.9% of our genome with chimpanzees.  It is challenging to consider that we have about the same number of genes as mice and fish; but we have far fewer genes than plants.  It is a high school science experiment to extract DNA from strawberries. Rather than a double helix, their DNA is wrapped in a quadruple helix. Obviously, the chromosomes and genes are only part of the picture.

“Every time we see two things which are genetically identical, but which aren't the same, we're seeing epigenetics in action.” – Nessa Carey.

Epigenetics is often presented as a new frontier in biology. In fact, the word originated in the 1940s; and the first book came out a decade later. Following Crick and Watson, science was focused on the chromosomes, and then on the genes.  The Human Genome Project was declared to be successful and the equivalent of Project Apollo, both for the complexity of the task and for its promise for our future.  Enter into your Web browser the phrase “scientists find gene for” and it would seem that we are living on the Moon.

Ghost in Your Genes: PBS Nova (BBC 2006; WGBH 2007, 2008) delivers graphic evidence that genetics is not heredity.  Identical twins raised in the same home diverge, one developing autism.  Twin sisters discover that one has cancer, but the other does not.  The town of in northern provided a paradigmatic story of the effects of environment on heredity as grandparents who had suffered starvation passed the consequences not to their children, but to their grandchildren – depending on the sex of the ancestor and the sex of the descendant.

The same differentiation was shown in the twins Jenna and Bridget. Bridget’s autism is associated with a genetic deletion in Chromosome 15 - the ubiquitin-protein ligase E3A (UBE3A) gene (Mayo Clinic here).  It is called Angelman Syndrome. However, the same deletion is also associated with Prader-Willi Syndrome, a form of obesity.  The outcome depends on whether the X-chromosome carrying it is inherited from the mother or from the father.  The chromosomes and genes themselves are identical in both cases; the expressions are markedly different. 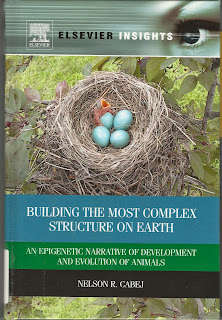 “The route from genes to morphological characters is convoluted and, in many aspects, still escapes us. This is the reason why we have no hypothesis or model yet of the sequential steps of the development of an organ. There is no evidence that any part of the genome (a gene or a number of genes) codes or determines steps for developing a brain, a heart, or even a strand of hair. It is true that genes or genetic networks are involved or responsible for developing such characters, but their involvement is not linear: a number of different types of cells have to be differentiated and arranged in specific spatial patterns in order to form the organ. But both cell differentiation (Christopher and Helin, 2010) and dedifferentiation (return of cells to pluripotency) (Takahashi and Yamanaka, 2006), as well as activation of gene regulatory networks (Cabej, 2010, pp. 23-24, 39-80), are epigenetically rather than genetically determined. -  Building the Most Complex Structure on Earth: An Epigenetic Narrative of Development and Evolution of Animals by Nelson R. Cabej (Elsevier, 2013, pg 67.)

As depicted in the PBS Nova production, the Överkalix study revealed an array of distinctions laid over the chromosomal inheritances.  Diabetes, early death, or longer life in the descendants depended on whether the affected ancestor was male or female. Whether the ancestor was within the womb or out also effected contrasting outcomes. Exactly when during gestation the event occurred also effected a different result.

Wikipedia has a bit more to say. “The Överkalix study was a study conducted on the physiological effects of various environmental factors on transgenerational epigenetic inheritance. The study was conducted utilizing historical records, including harvests and food prices, in Överkalix, a small isolated municipality in northeast . The study was of 303 probands, 164 men and 139 women, born in 1890, 1905, or 1920, and their 1,818 parents and grandparents. 44 were still alive in 1995 when mortality follow-up stopped. Mortality risk ratios (RR) on children and grandchildren were determined based on available food supply, as indicated by historical data. Among the sex-specific effects noted; a greater body mass index (BMI) at 9 years in sons, but not daughters, of fathers who began smoking early. The paternal grandfather's food supply was only linked to the mortality RR of grandsons and not granddaughters. The paternal grandmother's food supply was only associated with the granddaughters' mortality risk ratio.  … The father's poor food supply and the mother's good food supply were associated with a lower risk of cardiovascular death.”

In The Epigenetics Revolution (Columbia University Press, 2012), virologist Nessa Carey tells a similar story from the Dutch Hunger Winter of 1945.  “If a mother was well-fed around the time of conception and malnourished only for the last few months of the pregnancy, her baby was likely to be born small. If, on the other hand, the mother suffered malnutrition for the first three months of the pregnancy only (because the baby was conceived towards the end of this terrible episode), but then was well-fed, she was likely to have a baby with normal body weight. … The babies who were born small stayed small all their lives, with lower obesity rates than the general population. For forty or more years, these people had access to as much food as they wanted, and yet their bodies never got over the early period of malnutrition. …  Even more unexpectedly, the children whose mothers had been malnourished only early in the pregnancy had higher obesity rates than normal.” (pp 3-4). And this tendency to overweight was inherited in the grandchildren (pg. 102).

Nessa Carey has a virology PhD from the . She worked for five years at the Metropolitan Police Forensic Science Lab in . (Her website is here.) In this book, she carries the analogy of a Shakespeare play. The text of Romeo and Juliet is the same for everyone. Almost every cell of your body has exactly the same chromosomes. (Red blood cells and sex cells are exceptions.)  But you do not grow teeth in your eyes. The director’s comments, distributed with the script, provide more information. Methylation and histone deacetylations change the expressions of genes. Moreover, actors write notes in pencil or attach Post-its.  We smoke cigarettes, drink alcohol, and ingest insecticides and herbicides. They affect us, of course, but it seems likely that they also affect our grandchildren.

These facts, should have been the clues to scientists that the chromosomes, the genes, DNA and RNA must be directed by other agents. Otherwise, as Carey says several times, you would grow teeth in your eyes.  By analogy to the exploration of space, a series of giant steps over centuries allowed us to plot the orbits of the planets correctly.  The work of Darwin, Mendel, Crick and Watson, the human genome project, all provided the shoulders of giants for today's research. Epigenetic medicine may be the equivalent of the Lunar colony.