When Science Goes Wrong: Twelve Tales from the Dark Side of Discovery by Simon LeVay (Plume Penguin, 2008).  LeVay lays out his facts in careful narratives.  In many cases, he interviewed the key actors, albeit some years after the events.  He marshals the pros and cons before stating his final conclusion.  The cases come from a several sciences, including volcanology, criminology, meteorology, microbiology, genetics, and nuclear physics.

In 1993, geologists attended a conference in where the Galeras volcano had become active. They visited the calderon, climbing down into the crater. When it erupted, most of them were killed.  Among the survivors was the only scientist actually wearing the protective gear mandated by the National Science Foundation.  Some of the victims were in jeans and sneakers.

The case from criminal forensics about Josiah Sutton of , took DNA evidence past the confines of even the Innocence Project.  In this case, the so-called gold standard of physical criminalistics proved to be fool’s gold.  The police lab had committed a series of mistakes, some perhaps accidental and careless, others apparently purposefully fraudulent.  The victim wrongly identified two men as her attackers.  When the DNA samples matched neither man, the prosecutor insisted on their guilt, and posited the existence of a third unidentified attacker.  This is a common ploy with prosecutors who refuse to admit their mistake. 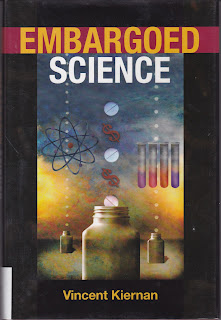 Embargoed Science by Vincent Kierman ( Press, 2006).  Major academic journals such as Nature, Science, the New England Journal of Medicine, and a hundred or so others, have a policy of announcing important publications by sending press releases to major mainstream media on the condition that the reporters not publish until the journal does.  The result is loud bursts of astounding science stories breaking on our awareness ... which then fade … until the next time.  The true costs include the loss of reflection and review, as contradictory findings roll out over the years without in-depth comparison and contrast.  Another cost is the loss of independence both of the news media which will not pursue a story beyond the press release; and also among the scientists who are constrained to divulge only what they publish in peer-reviewed journals.

Yes, We Have No Neutrons: An Eye-Opening Tour Through the Twists and Turns of Bad Science by A. K. Dewdney (John Wiley & Sons, 1997).  Dewdney took over from Martin Gardner in Scientific American, and this book is a modernization of ’s Fads and Fallacies in the Name of Science.  The stories here about N-rays, intelligence quotients, Freudian psychotherapy, cold fusion, Biosphere 2, and SETI (the Search for Extraterrestrial Intelligence) are exemplar warnings to avoid the known dangers of confirmation bias, arrogance, and ambition.

Dewdney offers the model of the sorcerer and the apprentice for his narrative analogy.  It is the familiar story from Goethe as delivered by Disney.  We all make mistakes, even sorcerers.  It is when the apprentice presumes beyond his true abilities that disasters unfold.  In these stories, disasters come from scientists who should be sorcerers acting like mere apprentices, forgetful of the full canon of the scientific method, from the creation of testable hypotheses to publication and peer review. 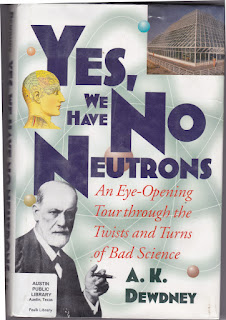 “Yes, We Have No Neutrons does not address fraudulent science, but mistaken science. The appropriate persona, therefore is not the con artist, but the bumbler: the apprentice if you will.” (Page 2) “What is bad science? To begin with, whatever it means, bad science must be distinguished from fraudulent science.  Apprentices, by definition, honestly believe that they are sorcerers. Fraudulent scientists (and would-be scientists) know that they are cheating when they fudge experiments, steal ideas, or make false claims. They are more like evil magicians than apprentices. …  Bad science happens when someone strays in a fatal way from the scientific method.” (Page 17).

Dewdney takes the reader through three doors to explore the castle of science.  First, he differentiates technology from science.  “Technology consists of objects that have specific purpose. Science consists of methods and results.”  This is important because in the mass media the equipment of science – antennae, computers, reactors, satellites, etc. – stand for science.  Dewdney points out, however, that these are not essentially different from other examples of our material culture such as bicycles, dental floss, lawn mowers, refrigerators, and telephones.

Indeed, I add here that in the book Biopunk: DIY Scientists Hack the Software of Life by Marcus Wohlsen (reviewed on Necessary Facts here), the author points out for 100 years, scientists from Pasteur to Salk worked without apparatus that we have in our kitchens. The same applies to our garage and basement workshops.  The point is that the mass media presentations of the gizmos and gadgets confuse technology with science, which Dewdney carefully delineates.  Science is a method.

However, Dewdney falls into the analytic-synthetic dichotomy. His second door delineates deductive from inductive science.  He does not unify the two, though, indeed, they must both identify the same reality.  Behind the third door is the getting and testing of ideas.  Scientists observe, ask questions, formulate hypothesis and perform experiments.  The goal of the experiment is to challenge and pass the theory.  This is where most of the fallen sorcerers reveal themselves to be mere apprentices.  Sigmund Freud built his wonderful theories from six case studies and no statistical samples or blind tests.

Junk Science: How Politicians, Corporations, and Other Hucksters Betray Us by Dan Agin, Ph.D., (Thomas Dunne St. Martin’s Press, 2006) repeats many of the known stories of Piltdown Man, eugenics, phrenology, and Lysenko.  As a working biologist, he also offers cases that are less well known to the general public, such as Emil Abderhalden’s “defense enzymes.”  Agin also writes about the recent cases (1997-2004) of Marion Brach, Friedhelm Herrmann, and Roland Mertelsmann who conspired to publish at least 37 and perhaps 100 papers for which the experiments and data were entirely fabricated.


“There are two prevalent myths concerning scientific fraud.
The first myth states that most scientific experiments are replicated by other laboratories, that science is self-correcting because the discovery of fraud involving the fabrication of data is inevitable.
The second myth is that scientific papers involving fabrication of data are extremely rare, with only a few fraudulent papers published in any one year."

In fact, given the huge body of published papers, even a small percentage of fraudulent cases – perhaps only 0.04% according to the arithmetic of published cases from the Office of Research Integrity of the U.S. Department of Health and Human Services – means that from the 5,600 significant scientific journals come 400 fraudulent papers each year.  However, by the metrics of criminologist Liqun Cao, (see previous posts on this blog) the number might be closer to 200,000 given that the intentional harms might be small: rounding up or rounding down, dropping inconvenient data, etc.  The median guess might be the most accurate. “In one survey published by American Scientist in 1993, between 6 and 9 percent of scientist respondents said that they were personally aware of results that had been plagiarized or fabricated within their facilities.” (Page 40) 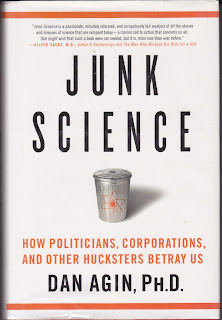 The downside is that Dr. Agin has his own political views which color his diagnosis and remedies.  Corporations can be evil in selling us what we demand – such as junk foods and the fad diets to counter their effects, to say nothing of cigarettes – but the government is only unresponsive when politicians give in to the “wrong” pressure groups, such as Christians who were opposed to embryonic stem cell research.  Agin accepts all of the claims of anthropogenic global warming. He agrees with its fundamental reality. He falls in with the inevitable consequence that governments must do something immediately, no matter how severe.

Dan Agin’s politics aside, the book is nonetheless an outstanding expose of many instances of bad science, much of it going on right now.
Posted by Michael E. Marotta at 12:53 PM