Where All the Children are Above Average: Advocating for the Gifted

If the Flynn Effect is valid, then public education as we have known it must change – and probably changed already. Identifying the problem (if it exists) and then marketing solutions requires the selfsame creative thinking for which the gifted have been identified.  The first challenge is that the definition of “gifted” is highly nuanced and might be intractable.  Creating a collective concept for a wide assortment of very many unusual individual cases might be counterproductive.  Two recent books demonstrate that experts who study gifted children find the results they seek. In other words, when it comes to social prejudices, scientific research is just confirmation bias supporting the attribution fallacy. 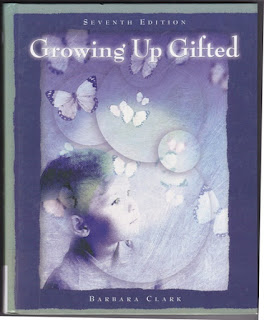 Growing Up Gifted (Seventh Edition) by Barbara Clark (Pearson 2008) is basically a textbook for teachers.  It also can serve parents, and perhaps gifteds, as an educated, intelligent mainstream guide.  The book opens with a section of five chapters on understanding gifted education and talent development.  The last two sections present existing educational processes in school and suggest models for creating and maintaining school programs.  Prof. Clark is widely recognized as an advocate for gifted education.  However, she also accepts the basic premises of public education.  Prof. Clark never questions the pseudo-science of Asperger’s Syndrome. Also, if a gifted child is an “underachiever” then the solution is to find ways to motivate them to do more and better of what others have decided is best.

And that might be true in many cases.  But those are cases, not populations.

The basic flaw in her thinking is confusing a taxonomy with a remedy.  Ultimately, she has many good ideas to explain her topic, for instance these presented to the Texas Association for the Gifted and Talented.  But who will implement them? Even this association is for the gifted not of the gifted.  I believe that gifted and talented teachers are best able to provide for the exceptional or advanced learner.

Nerds: Who They Are and Why We Need More of Them by David Anderegg (Jeremy P. Tarcher/Penguin 2007) slays an array of little dragons that plague nerds.  Dr. Anderegg obviously is an advocate. At the same time, though, he also seeks to deconstruct the concept of “nerd.”  Make no mistake: it is a schoolyard insult.  Whether it (and “geek”, etc.) can subsume other meanings is not clear.  So, the book is ambivalent, at once saluting nerds yet also denying that they exist.  Anderegg covers a lot of ground.  The book reads like transcribed lecture notes.  Unlike , he does not buy into the theory of “Asperger’s Syndrome”. 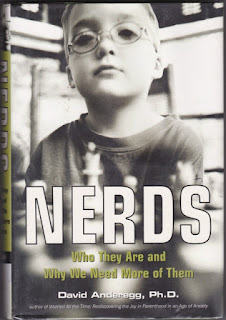 Citing Richard Hofstadter, Anderegg ties the prejudice against nerds to the broad anti-intellectual streak in American culture perhaps born (if not conceived) in the Jackson-Adams presidential campaign of 1824, Emerson's "American Scholar" address and Irving’s “Legend of Sleepy Hollow.”  Coming into the present, the boy mechanic who works on cars is not a nerd; the one who builds computers is.  The American male is man of action, not a man of thought.
That reveals the autobiographical theme of this book, if the congruence between the cover and the picture of the author do not suggest this.  Anderegg’s work is about boys.  The Boy Scouts have four citations in the Index; the Cubs Scouts even get one. The Girls Scouts are mentioned once in passing (along with Boy Scouts); the Brownies do not appear.

Anderegg does offer hope for change in the broader culture.  He cites the television shows NUMB3RS and The Beauty and the Geek. (Launched in 2007, The Big Bang Theory could not appear here.)  He also holds Harry Potter up as a paradigm.  Potter looks the part, of course; but Potter is an athlete.  His prowess at Quidditch is commanding.  (Anderegg ignores Potter’s contests against Voldemort and the forces of darkness.)

On CNN’s “Schools of Thought” blogs for November 14, 2012, Carolyn Coli presented “Ten Myths About Gifted Students and Programs for the Gifted.”  Her Myth #9: It never hurts gifted students to teach others what they already know. She pointed out correctly: “Most gifted students do not know how to tutor others. They often are frustrated that struggling students don’t understand what they perceive as easy.”  Among the replies was this two days later from Andrea Saylor:

“They wanted to test my daughter for "gifted" and I opted out. I didn't want her to be "different" from the other students. She was shy by nature. She tutored otther students and went on to be valedictorian of her graduating class. She went on to get her Masters in Psychology. She now tests students for "gifted" "special needs" "autism" etc. Funny how things turn out.”

That exchange is an example of the complexity of the issue.  Both writers were correct.  The overarching explanation is that we are all individuals and generalizations about us necessarily fail at some level.  With children who are especially talented, this is starkly apparent.  “One size fits all” is not the problem: one size may not even fit two.

As Carolyn Coli pointed out, contrary to myth not all children are gifted.  However, children do learn; and many will rise to an intellectual challenge.


What happens if you give a thousand Motorola Zoom tablet PCs to Ethiopian kids who have never even seen a printed word? Within five months, they'll start teaching themselves English while circumventing the security on your OS to customize settings and activate disabled hardware. Whoa. "Ethiopian kids hack OLPCs in 5 months with zero instruction" on Dv!ce here.


hat story raises basic questions about the nature of public schooling in , for gifteds or normals alike.