The Remarkable Story of Risk

Against the Gods: The Remarkable Story of Risk by Peter L. Bernstein explains that the modern world was created by the mathematics of chance.  Earlier times had traders, bankers and merchants.  Our capitalist culture is special because of the mathematics of risk invented by Fermat and Pascal.  Those tools within the Renaissance cultural context allowed the idea that we could - and should - discover and control the future.

“The revolutionary idea that defines the boundary between modern times and the past is the mastery of risk: the notion that the future is more than a whim of the gods and that men and women are not passive before nature.” (pg 1 ppb)

I first reviewed this book for the Objectivist Living discussion board here. Over the years I alluded to it occasionally there and on the Rebirth of Reason website. My copy has dozens of Post-its.  Looking through the book again, I made still more notes. Perhaps it is my own ignorance, but hardly a page lacks something important worth marking for future reference.

These facts, insights, observations, and assertions reflect more than shopping at a supermarket.  After all, von Mises called his work Human Action, not People at the Grocer’s.  “Fear of harm ought to be proportional not merely to the gravity of the harm, but also to the probability of the event.“ (Attributed to the Port Royale Logic.) In criminology, we say that punishment must be “swift, certain, and severe.”  Statistical evidence shows that only certainty seems to prevent crime. 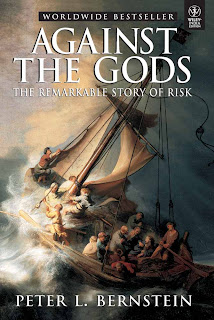 The development of risk theory has deep roots.  Astragalus “knuckle bone” dice are known from Egyptian tombs of 3500 BCE – and pharaoh’s dice were loaded.  But the ancient world had many of the artifacts we assume are modern from accurate astronomy to coal, iron and steam powered mechanisms.  True enough, the arithmetic was cumbersome, but something else far more consequential was lacking.

“Up until the Renaissance, people perceived the future as little more than a matter of luck or the result of random variations and most of their decisions were driven by instinct.  When the conditions of life are so closely linked to nature, not much is left to human control. As long as the demands of survival limit people to the basic functions of bearing children, growing crops, hunting, fishing, and providing shelter, they are simply unable to conceive of circumstances in which they might be able to influence the outcomes of their decisions.  A penny saved is not a penny earned unless the future is something more than a black hole.” (pg. 18)

From there, Bernstein covers the expected territory of probability theory and statistics: Pascal, Fermat, Graunt, Galton...  Allusions and examples from the American stock markets abound.  While an impassioned capitalist, he is not perfectly consistent in an Objectivist sense, admitting to the need for some government regulation of the financial markets.  However, lowercase-o objectivism runs throughout this work, as it must in any exploration that supports facts with theories and hypotheses with evidence.  Bernstein quotes economist (and Nobel laureate) Harry Markowitz on diversification: “Diversification is both observed and sensible; a rule of behavior which does not imply the superiority of diversification must be rejected both as a hypothesis and as a maxim.” (pg. 252).

Also my Randian comrades will find it curious that John Maynard Keynes could be quoted as an objectivist: “When once the facts are given which determine our knowledge, what is probable or improbable in these circumstances has been fixed objectively and is independent of our opinion.” (A Treatise on Probability, 1921; cited pg 226.)

Peter Lewyn Bernstein (January 22, 1919 – June 5, 2009) shared his passion for markets with Robert Heilbroner (The Worldly Philosophers) with whom he attended both primary and secondary school, as well as . (Biography on Wikipedia here.) Bernstein is also associated with the efficient market hypothesis which says that current prices reflect all the information that is generally available and out-performing the market is impossible without taking on more risk. (See Investopedia here and also Wikipedia here.) [edited 11 Feb 2021.]
Bernstein was the first editor of The Journal of Portfolio Management. He authored several books including Capital Ideas: The Improbable Origin of Modern Wall Street.  Bernstein published five of his ten books after he was 75 years of age.

Business Week’s reviewer, Peter Coy, call the theme of risk management “The Closest Thing to a Crystal Ball” (here)  “Bernstein brings Against the Gods up to the present with an account of how some skeptical researchers--beginning with the Israeli-born psychologists Amos Tversky and Daniel Kahneman in the 1950s--trashed the classical model of rationality by exploring how people actually behave in risky situations. The bottom line: People behave irrationally, even when they know they are doing so. Bernstein relates an anecdote about a distinguished Soviet professor of statistics who showed up at an air-raid shelter during a German bombardment. Until then, he had scoffed at the prospect of being hit. What changed his mind?  “Look,'” he explained. “There are 7 million people in and one elephant. Last night, they got the elephant.”