Usually on the third Friday of most months, the Austin Tech Republicans meet at the Brick Oven in Gateway Plaza across from Arboretum on Research Drive at I-183. [They now meet at "Big Daddy's on Burnet and 183.]

The July 20 meeting featured guest speaker Mario Loyola who authored the National Review cover story on the Supreme Court ruling on “Obamacare.”  Mario Loyola granted that when the ruling came down conservatives expressed instant indignation and liberals expressed instant elation.  However, he said, “instant indignation and instant elation are indicative of inverse understanding of the issues.” 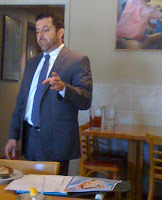 Mario Loyola works for several think tanks, among them the Texas Public Policy Foundation.  At the meeting, we were given offprints of his National Review cover story and his two papers for the Texas Public Policy Foundation.  In an interactive engagement with the audience, he addressed the premises and problems of both“Obamacare” and the recent Supreme Court decision.
Loyola offered his opinion that “three quarters of the dissent” was written in the chambers of Chief Justice John Roberts.  My estimation is that Loyola apparently believes that like Justice John Marshall Harlan, the “great dissenter” famous for his devastating rebuttal of Plessy v. Ferguson, Roberts intended to lay the groundwork for a reversal of Obamacare, while nonetheless at the same time being bound by conservative constitutional theory to honor the 200 years of precedent in support of his majority decision.

That last was the iceberg under the water.  Mario Loyola said that he went back and laboriously re-read every one of the Supreme Court decisions on severability back to Marbury versus Madison.   Severability is the doctrine that the Supreme Court can rule a single clause of a law unconstitutional, while keeping the rest of the law intact.  To Loyola, as to constitutional conservatives, that actually creates a new law, not passed by Congress and not signed by the President.  I asked a question:  “Given that the law is the statement of social contract between the citizen and the state, is it not true that in contract law, the fact that a single clause is invalid does not invalidate the intent of the agreement.”   Mario Loyola said that this question caught him off guard and he would address it later, for which he did not get the opportunity.