Westwood High School in the Round Rock Independent School District outside Austin runs a science class in forensics.  On Tuesday, May 8, 2012, I spoke to four forensics classes joined by two psychology classes on the topic of forensic psychology.  On the one hand, we all do forensic psychology every day.  Beyond that, most of what passes for profiling - especially via the mass mediated hyper reality of crime presented via television and the Internet - is junk science in the courtroom.

This is the bibliography for those presentations. 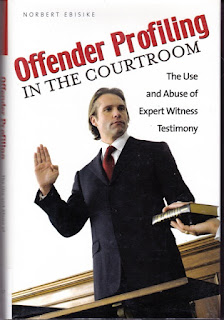 Cao, Liqun. Major Criminological Theories: Concepts and Measurement. Thompson Learning, 2004. Presents the common array of theories, each tested against one or more metrics.

Sutherland, Edwin H., and Donald R. Cressey. Principles of Criminology. J. B. Lippincott, 1924, 1947, and 1955. Sutherland’s paper to the American Sociological Association on white collar crime on December 17, 1939, changed criminology. His theory of “differential association” led to other “differential” theories. This textbook begins with causes and ends with parole.

The National Institute of Justice http://www.nij.gov/
A plethora of resources, including invitations and funding for conferences, studies, reports, statistics, findings, and opportunities for research.

Cole, Simon A. Suspect Identities: A History of Fingerprinting and Criminal Identification. Press, 2001.

Gregg Barak http://www.greggbarak.com/
One of the leading criminologists of our time blogs about his many textbooks and his work on mass media, including “The CSI Effect.”