The Rational Optimist and The Grand Complication

Finding a quotable quote is a challenge because all 359 pages are exciting and pithy.  This is an antidote to the ever-popular doomsaying.  Pessimism has been an easy sale for hundreds of years.  Predictions for the end of the world transcend religion and take on mathematical precision during the very Industrial Revolution that disproved the claims.

The Rational Optimist: How Prosperity Evolves
by Matt Ridley (Harper, 2010).

“If this goes on…” by 2030, China will need more paper than Earth produces… we will run out of petroleum (of course)… we will be crowded, starved, polluted, ignorant; and the few survivors will be poorer than dirt to the end of their days.  True enough, says Ridley.  But the big “if” never obtains because the world is constantly changing, improving, getting better. “If this goes on…” fails because “this” never “goes on” but in fact is altered by something unexpected.  Yes, there are dark ages, plagues, famines, and wars, but generally, since the invention of trade about 18,000 years ago, our lives have gotten exponentially better.  Taking a word from Austrian economics, Ridley calls this “the great catallaxy.” 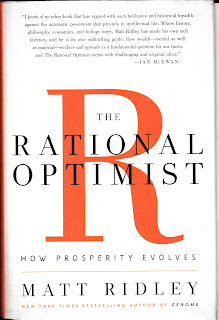 The book opens with a photograph of a stone hand ax and a computer mouse.  Both fit the human hand.  The stone tool was made by one person for their own use.  Thousands of people made the mouse and no one of them knew how.  From the petroleum for the plastic to the software driver, each person did one thing; and it comes to you in exchange for the one thing you know how to do.  The maker of the hand ax enjoyed nothing they did not get for themselves.  (Among homo erectus including Neanderthal, it seems that both males and females hunted by the same methods.)  The hunter-gather was limited to their own production – and so could not consume very much.  We enjoy unlimited access to the productive work of others.  Each of us has, in effect, hundreds of servants; and would be the envy of any warrior, peasant, chief, or king for our cheap, easy, and sanitary lives.

Each chapter begins with a graphic showing the exponential improvement in life span, health, prosperity, and invention.  Another one shows the hyperbolic fall in homicides and yet another shows the dramatic decline in US deaths by water-borne diseases.  Ridley examines barter and trade (“the manufacture of trust”), the agricultural revolution, urbanization, and the invention of invention.  Each turn of the page overturns a common assumption.  Just for instance, shopping for locally produced food more often results in less efficient use of petroleum; and, of course, it penalizes farmers in poor countries.

Ridley supports his claims with citations found at the back and linked to the page on which the assertion is made or fact is asserted.  That said, it is important to keep your calculator handy.  I found out about this book from a review (here) on the Objectivist website, Rebirth of Reason.  There, one of the frequent contributors cited this from the book:

Nonetheless, it is important to see through the razzledazzle.  Ridley presents the same information twice in two different formats. First, how much light an hour of labor would buy; then, how long you would have to have worked to have earned the equivalent of an 18-watt compact fluorescent reading light for one hour.
In the first case, he offers for 1750 BCE, 24 lumen-hours.  A lumen is about 1/12 of a candle (.079). So, one hour of labor then would buy you about 2 hours of reading light. ... but not the 18 watts of a modern fluorescent lamp. (A lumen is about 1/700 of an effective watt of spherical light -- .00147 -- so 18 watts is like 12,000 lumens.). I agree that we get more light - incredibly more - but the presentation of numbers does little to illuminate the subject. A modern lamp gives the same light as 1000 candles, but you would never put 1000 candles in one place just for reading.
More stunning to me is the growth in fractional machines: fractional horsepower motors and fractional watt lamps. My internet modem is showing six lights, each less than a candle (maybe a lumen; maybe less) and all of them not generating but the merest fraction of the heat.
Again, I liked the book, but I am reminded of Richard Feynman's injunction that we not fool ourselves with what we want to believe.

That said, if you want to sprinkle your social chat with positive endorsements of modern times, get this book and memorize a few facts.  Life is great now.  Comparisons to the Ice Age are easy.  Ridley compares our world of 2010 to the world we left behind in 1955.  Think about your cellphone, GPS, the amount of music on a CD or your choice of DVDs.  I add that even organic food – for all the intellectual errors in that movement – is easier to get at any grocery store today as major retailers cater to our tastes.  Imagine going to McDonald’s of 1955 and asking for a salad.  If you are not an optimist now, this book could change your worldview.


The Grand Complication: a novel by Allen Kurzweil (Theia, 2001) is a delightful story that delivers an overstuffed display case of trivia centered on libraries.  Each of the Acknowledgments at the back begins with a Dewey Decimal call number (“case mark”).  I made four pages of notes for myself.  And I found some problems.  The story is easy enough: boy meets girl; boy loses girl; boy finds girl. 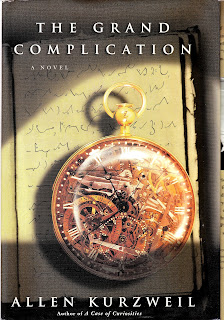 Our librarian hero and his artist wife are torn apart by his obsession with work for a private collector who entices him to search for a grand piece of mechanical jewelry, “The Marie Antoinette” made by Abraham-Louis Breuget (his catalog number 160), stolen in 1983 from a Jerusalem museum.  (Wikipedia here.)  It was recovered after this book was published. (Breuget website here.)
As a good title, this one is a pun because like the timepiece, the antagonist himself is a complication.  Eventually, our hero triumphs, of course, with the help of his friends, and his wife.

Going back over my notes, I find that some of the vocabulary seems local to the author’s own library.  Not all of the special terms were corroborated by these glossaries:

However, I was happy to learn the both the proper name for when pages are uncut at the edges (“unopened gathering”) and the proper way to cut them apart.  Deckle, finding aid, class marks, phase box, … KWIC (key word in context), and a slew of Dewey Decimal numbers (Rock Music 781.66) to add to those which I did know.

The attention to detail made the errors I caught stand out.  On page 23 is a “blond woman.”  On page 147 is an allusion to a mathematician who won a Nobel Prize.  It is not impossible for a mathematician to garner the award for work in medicine or world peace, etc., but it is famously known that there is no Nobel Prize in mathematics.  On page 338, to activate old automata, the hero uses old coins, including a dime for which there are several possibilities from the Draped Bust and Seated through the so-called “Mercury” or “Winged Head Liberty.”  There follows a simple typographical error, no capital B in “Buffalo nickel” (properly called the Indian Head or Buffalo 5-cent nickel coin.).  But such oversights made this book even more fun to read.
An interesting glitch from my local library is their catalog citation:
The grand complication
Kurzweil, Allen.

In the book itself,  our hero says that he has written a book about this adventure and had it carefully typeset to a perfect 360 pages for the 360 degrees in a circle.  Indeed, the book runs 360 - not 359 - pages.
Posted by Michael E. Marotta at 8:08 AM