Ayn Rand observed that for most people, “integrity” is not putting your hand in your neighbor’s pocket, when, in truth, integrity is having no conflicts between your morals and your ethics, between the ideal and the practical, between what is and what you want.  ’s Objectivist ethics derive from a primary consideration of human nature.  Plants and animals do not choose, therefore for them, morality cannot exist.  For us, every choice, by definition, is a moral choice.  identified the fact that in building a bridge, every girder is designed in answer to one question: Right or wrong?

Every teacher knows – contrary to the claims of political commentators left and right – that there is no way to open a student’s head and pour in the answers.  The door to learning swings from the inside.  Ideally, any book on ethics for engineers would be written from the rational-empirical (objectivist) foundation of the scientific method.  The reality of university learning requires that we admit to the existence (if not the validity) of pragmatism, contractarian ethics, deonotology, existentialism, and other limited and limiting offerings.  Students come to the classroom with these assumptions – and others: many kinds of Christian interpretation are common in the English-speaking world.  Generally, we use these formal structures to defend the opinions we bring to the classroom, and take out into the working world.

When I was in the 9th grade, our civics class had a debate on capital punishment.  Two of the class were girls from the same Pentecostal church.  They took opposite sides.  Forty-five years later, I took both sides of that debate for a criminal justice class.  While I believe that objectivism offers a better set of tools for analysis, I have to admit that no system can resolve all the conflicts, or even state all the questions, unambiguously.  Ethics is harder than mathematics. 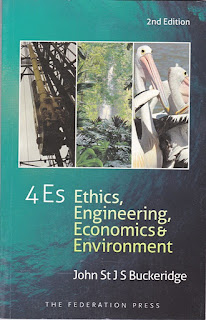 On that basis, 4Es: Ethics, Engineering, Economics & Environment by John St. J. S. Buckeridge (Annandale NSW: The Federation Press, 2011) is a convenient platform for delivering the opportunity to bring students in science, engineering, and technology to the task of asking the right questions about professional ethics.  The book is essentially an outline, 128 pages in all, that opens the door to the lectures, papers read and written, and discussions engaged.

Because morality is choice, ethics is all about problems.  How do we identify and reconcile competing interests or conflicts of interest?  What consequences will follow? Which of them is important?  To what degree is each relevant? This book begins with ethical problems common to the news.  After a brief discussion of morals, ethics, values, and profession, the first chapter offers case examples of moral and ethical conflicts.  Among them are the Stanford Prison Experiment, the Marsupial Mouse, the rights of indigenous peoples, and the debate over fur and leather garments.  Chapter 2 begins the formal investigation of theories of morality and ethics: Aristotle’s virtue ethics; egoism, John Stuart Mill’s utilitarianism, and John Rawls’ contractarian theory; deontology; and existentialism.  Chapters 3 and 4 return to the problems.  Examples such as the new mandates for fluorescent lamps are from the recent news, though others such as the fishing of common waters have been continuing for generations.   Most important are the cases of Andrew Wakefield, Peter Davis, and Vishwar J. Gupta involving research misconduct, conflict of interest, and research fraud, across national borders and within national politics.

While intended for upper division university students, the book could easily serve a high school class.  The writing is clear and direct.  The problems are timely.  The treatment can serve an important purpose in providing a foundation for the same investigations later at university and at work.

From my point of view, it would have been better to provide an authoritative source for the section on egoism, just as Mill, Rawls, Kant, and Heidegger were cited in the other presentations. 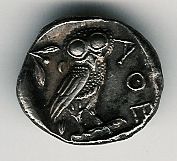 The book came to my attention because the author relied on a vignette I wrote about the Athenian “owl” tetradrachma, “Of Owls, Wooden Walls, and Flower Girls.”  Buckeridge uses the reverse of the coin (the owl side) with his own inscription EOS standing for both the Earth and Oceanic Systems Research Group at the Royal Melbourne Institute of Technology, and, of course for the Greek word for “dawn.”