Has Global Warming Cooled Off?

Despite record tempertures across the continguous USA, especially in the upper and lower Great Plaines, advocates of anthropogenic global warming (AGW) have been reticent.  With drought gripping Texas, the opportunity seems too good to miss.  Yet, the news is bare.  Perhaps the paper by Spencer and Braswell in Remote Sensing is the cause.  Perhaps the over-riding economic news pushed the story away.  Maybe, like climate and weather, the causes of this "hole in the reporting layer" are many, perhaps unrelated, and not well understood.

Apparently, there was a conference in Lisbon July 11-14.
"Evidences that global Earth temperature is on the rise are mounting together with signs that the Earth system may go through significant forcing. This offers a great opportunity to update the views about the Earth system, think globally, take a new look to old problems, seek for new ideas and solutions, challenge current paradigms of energy use, and of land and ocean resources exploitation." 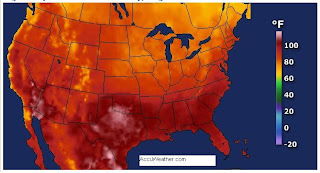 That story from Forbes, linked from Yahoo News,  echoed loudly in conservative, libertarian and Objectivist blogs and discussion boards.  The article itself was less sanguine.
From the Abstract: "Here we present further evidence that this uncertainty from an observational perspective is largely due to the masking of the radiative feedback signal by internal radiative forcing, probably due to natural cloud variations. That these internal radiative forcings exist and likely corrupt feedback diagnosis is demonstrated with lag regression analysis of satellite and coupled climate model data, interpreted with a simple forcing-feedback model."

In other words: We don't know.  No hole was blown in climate theories. Any of the AGW models theories may be right... or wrong...  The immediate data from Spencer and Braswell only suggest that more study is needed.


It is concluded that atmospheric feedback diagnosis of the climate system remains an unsolved problem, due primarily to the inability to distinguish between radiative forcing and radiative feedback in satellite radiative budget observations.

In simple terms, radiative changes resulting from temperature change (feedback) cannot be easily disentangled from those causing a temperature change (forcing).
[A]ll of the IPCC models therefore exhibit net positive feedbacks. Also, since all climate models have net feedback parameters greater than zero, none of the climate models are inherently unstable to perturbations.

Note that the differences ... exist not just at zero time lag, which is where feedback estimates from these regression coefficients have previously been made, but for several months when radiative flux leads and lags temperature. Also, note the change in sign of the radiative imbalances ... depending upon whether radiation leads or lags temperature. As we will see, this behavior gives us clues about the relative roles of forcing versus feedback in the data.

[W]e are still faced with a rather large discrepancy in the time-lagged regression coefficients between the radiative signatures displayed by the real climate system in satellite data versus the climate models. While this discrepancy is nominally in the direction of lower climate sensitivity of the real climate system, there are a variety of parameters other than feedback affecting the lag regression statistics which make accurate feedback diagnosis difficult.

We hypothesize that changes in the coupled ocean-atmosphere circulation during the El Niño and La Niña phases of ENSO [El Niño/Southern Oscillation] cause differing changes in cloud cover, which then modulate the radiative balance of the climate system. ... [F]or the ocean-only data, the signature of radiative forcing is stronger over the oceans than in the global average, suggesting a primarily oceanic origin.

Read it for yourself.  "On the Misdiagnosis of Surface Temperature Feedbacks from Variations in Earth’s Radiant Energy Balance," Roy W. Spencer  and William D. Braswell, Remote Sensing,  2011, 3, 1603-1613. Online here.
Posted by Michael E. Marotta at 6:25 AM