One of my captains recommended this. “You ought to get a lot out it, even based on what you know now,” he said. I think that he meant the problem of identifying with the men you have to send into battle, their deaths taking a toll on you, your wanting to protect them from the mission even though the mission comes first.


For me, the first thing that resonated was when the flight commander was told that the warning had just been issued and that new orders will be there soon.  WARNO… OPORD… FRAGO… is the battle rhythm, even for those of us who are not issued weapons because we provide community care.

A Fragment amends an Operations Order. Operations Orders have five sections. (When it is one page – at the insistence of Gen. Dwight D. Eisenhower – those are five paragraphs.) Situation; Mission; Execution; Sustainment; Command and Control. 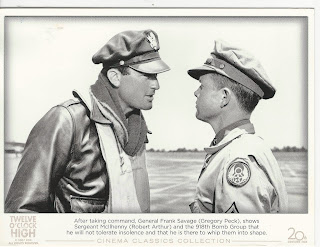 The consequential lesson here was the importance of discipline to morale. In the movie, BG Frank Savage (Gregory Peck) arrives at the 918th Bomb Group by busting a sergeant down to private for failing to challenge him at the gate and failing to salute. In real life, the most politically liberal staff officer in my group insisted that as a petty officer second class (E-5), when talking to a staff sergeant (E-6), I should be at parade rest. She said that she saw it stateside and she saw it in theater: you do not build morale by being lax; the tightest groups, the ones with the strongest esprit, were the ones with the best discipline.

After watching We Were Soldiers, I read the book by Hal Moore.  (Lt. Gen. Harold G. Moore just passed on February 10.)  That book was different from that movie.  (See my review here.)  In this case, the authors of the novel, Bernie Lay, Jr., and Sy Bartlett, wrote the screenplay.  Unfortunately, the book is not available at my local university or city libraries.